McAllen is the largest city in Hidalgo County, Texas, United States. It is located at the southern tip of Texas in an area known as the Rio Grande Valley and is part of the American Southwest. Its southern boundary is located about five miles from the U.S.–Mexico border and the Mexican city of Reynosa, the Rio Grande and about 70 miles (110 km) west of South Padre Island and the Gulf of Mexico. The 2010 census put the city's population at 129,877 and the McAllen–Edinburg–Mission metropolitan area at 774,769. The Reynosa–McAllen Metropolitan Area counts with a population of nearly 1.7 million.[3] The city's sharp increase in annual Medicare billing, from a national average in 1992 to one of the nation's highest in 2006, has attracted scrutiny.

Although McAllen is named the City of Palms, tropical vegetation is only locally dominant. There are many deciduous trees such as Rio Grande Ash (Fraxinus berlandieriana), Cedar Elm (Ulmus crassifolia), Sugarberry (Celtis laevigata) and Honey Mesquite (Prosopis glandulosa). In winter, when these trees are bare, many neighborhoods take on a much more temperate appearance.

McAllen has a humid subtropical climate, similar to that of the Tampa Bay Area of Florida but with less precipitation and slightly higher summer maximum temperatures. The average high in January is 70 °F and the average low is 50 °F. The average high is 96 °F and the average low is 76 °F in August. The warm season is extremely long, as average high temperatures are above 90°F (32 °C) and average low temperatures are above 70 °F (21 °C), with relatively high dew point values resulting in higher relative humidity values and heat index values from May through September. Heat index values can consistently reach over 100 °F from May through September.

Average annual precipitation is only 22.96 inches (583 mm). Most precipitation occurs in the warm season, with the least precipitation distinctly occurring in the cooler winter. As September is the peak of the north Atlantic hurricane season and tropical storms and hurricanes occasionally drop copious amounts of rainfall on the region, this month tends to be by far the wettest, averaging 4.08 inches (104 mm) of rain. The driest month is March, with only 0.72 inches (18 mm) of precipitation.

There were 33,151 households out of which 43.2% had children under the age of 18 living with them, 59.0% were married couples living together, 16.0% had a female householder with no husband present, and 21.3% were non-families. 17.9% of all households were made up of individuals and 6.4% had someone living alone who was 65 years of age or older. The average household size was 3.18 and the average family size was 3.64.

U.S. 83 travels through McAllen as its major east-west artery. It runs less than five miles south of downtown McAllen. 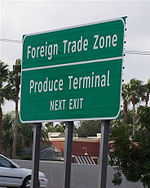 Prior to ratification of the North American Free Trade Agreement, economic activity in McAllen was centered around agriculture and petroleum.

A Foreign trade zone is located on the southwest side of the city. In addition to the industrial activity, there is a retail sector that is heavily dependent on purchases made by wealthier, and largely, Mexican middle and upper middle-class consumers. This sector benefits greatly from the express highway links, on the Mexican side of the border, to Monterrey, Cd. Victoria and Tampico.

A Forbes article on the internet list McAllen as one of the best real estate markets in the United States.. September 2010

In 2011, census.gov listed the McAllen metro area the poorest in the nation.[7]

In 1999, McAllen had one of the lowest concentrations of physicians per person in the U.S., with a value of 1 primary care physician per 2500 people, despite a 53% increase in the physican supply since 1979.[8]

In 2006, McAllen had the second highest per capita Medicare spending in the United States, eclipsed only by Miami (which has higher living and labor costs).[9] That fact served as the basis of a 2009 article in The New Yorker by surgeon and author Atul Gawande[10] which "made waves".[11] In 1992, McAllen was in line with average Medicare spending (~$4,900 for each beneficiary a year).[9] By 2006, the spending had increased to ~$15,000 for each beneficiary a year—almost double the national average.[9] With a $12,000 per capita income, Medicare billing per beneficiary was three thousand dollars higher than the average income of residents.[9] El Paso, a town with similar demographics, billed Medicare ~$7,500 per beneficiary in 2006.[9] El Paso hospitals, despite spending significantly less, outperformed McAllen hospitals on 23 of 25 health indicators.[10]

Using price adjusted 2007 Medicare data (based on the methods of Gottlieb et al.[12]) McAllen had spending elevations of 86% versus El Paso and 75% versus the national average.[13]

The Texas Department of Criminal Justice (TDCJ) operates an office in McAllen.[14]

The Catholic Diocese of Brownsville operates Our Lady of Sorrows School, an elementary and middle school.

McAllen Public Library operates a main library and two branches, the Lark Branch and the Palm View Branch. And will be opening a New Main branch in the Fall of 2011.[17]

Architecture and points of interest 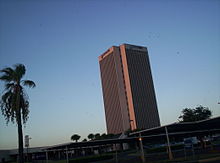 Birdwatching - The McAllen is positioned on the migratory path between North and South America, presenting bird and butterfly expeditions. The landscape hosts a diverse wildlife population.