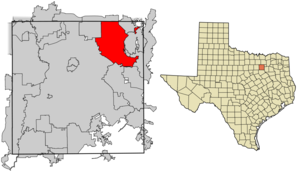 mapsize = 250px
map_caption = Location within and the state of

Garland is a city in Dallas County in the of . It is an inner suburb northeast of Dallas and is a major part of the . As of the 2000 census, the city had a population of 215,768, making it the tenth-most populous city in Texas and the eighty-sixth most populous city in the United States. Garland is within a short driving distance of most major attractions in the Dallas/Fort Worth Area.

Settlers began arriving in the Peters colony area around 1850 but a community wasn't created until 1874. Two communities sprung up in the area: "Embree," named for the physician K. H. Embree, and "Duck Creek," named for the local creek of the same name. A rivalry between the two towns ensued as the area began to grow around the Santa Fe Railroad depot. Eventually, to settle a dispute over which town should have the local post office, Dallas County Judge Thomas A. Nash asked visiting Congressman to move the post office between the two towns, which was done in 1887. The new location was named "Garland" after . Embree and Duck Creek were combined to form the city of Garland. In 1891, the new city was incorporated. By 1904 the town had a population of 819 people.

In 1920, local businessmen financed a new generator (sold by ) for the town. Out of this was formed Garland Power & Light, the municipal electric provider that still powers the city today.

On , , a devastating destroyed much of the town and killed 17 people, including former mayor S. E. Nicholson.

Businesses began to move into the area in the late 1930s. The Craddock food company and later the Byer-Rolnick hat factory (now owned by ) moved into the area. In 1937, , a major Dallas radio station, built a radio tower in Garland, which is operational to this day. During , several aircraft plants were operated in the area and purchased one after the war for their own manufacturing usage. By 1950, the population had reached 10,571 people.

From 1950 to 1954, the area suffered from a serious . To supplement the water provided by wells, the city began using the waters of nearby .

In the 2000s, Garland added several notable developments, mostly in the northern portion of the city. Hawaiian Falls waterpark opened in 2003 (Garland formerly had a waterpark, which closed in 1993). The 's Special Events Center, [ [http://www.specialeventscenter.com/ Special Events Center ] ] an arena and conference facility, opened in 2005, as did , an outdoor mall with more than 100 businesses. A franchise of the large sporting goods store opened in the southern portion of the city in 2006.

The success of the Special Events center has allowed for Hyatt Hotels to join in partnership with Garland ISD, and will be expected to host many future events. [ [http://www.dallasnews.com/sharedcontent/dws/news/localnews/stories/081207dnmetgareventscenter.2cb48e2.html Garland ISD's events center profits take center stage | Dallas Morning News | News for Dallas, Texas | Breaking News for Dallas-Fort Worth | Dallas Morning News ] ]

Recently, voters approved a $450 million bond issue in May 2004, which covers new buildings and expansion for , plus the addition of five community education campuses in under served or fast-growing areas of Dallas County - including plans for a Garland Education Center. [ [http://www.dcccd.edu/About+DCCCD/News+and+Events/News/DCCCD+News+Archive/2005+News/DCCC+Trustees+Approve+Purchase+of+Land+for+Garland+Education+Center+05.03.05.htm DCCCD: DCCC Trustees Approve Purchase of Land for Garland Education Center ] ]

In 2006, it was announced that the , would allow Richland College to oversee the development of the project, set to begin in late 2007. Goals for this campus include:

* A clear program focus on addressing the workforce development training needs of Garland by offering specific corporate and contract training;
* Flexible scheduling and configuration for training needs;
* Courses offered by several DCCCD institutions at one location, which is accessible by DART bus and light rail routes;
* A new Business Innovations Center, where principles of performance, excellence and prototype product and systems development can be offered;
* An environmentally friendly campus facility; and
* Offices for appropriate mission-related job opportunity/chamber/career development agency partners who can enhance on-site training and employment needs. [ [http://www.dcccd.edu/About+DCCCD/News+and+Events/News/DCCCD+News+Archive/2006+News/New+Admin+for+Garland+Ctr+08.31.06.htm DCCCD: DCCCD Announces Change in Administration for Garland Center ] ]

There were 73,241 households out of which 41.6% had children under the age of 18 living with them, 56.7% were married couples living together, 13.7% had a female householder with no husband present, and 24.3% were non-families. 19.8% of all households were made up of individuals and 5.0% had someone living alone who was 65 years of age or older. The average household size was 2.93 and the average family size was 3.37.

Most of Garland is in the (GISD). Parts of Garland extend into other districts, including the (DISD), the (MISD), and the (RISD).

The GISD does not have school zoning, so GISD residents may apply to any GISD school.

The GISD portion of Garland is served by several high schools. is home to the district's program. is the math, science and technology magnet. is GISD's "College and Career" magnet school. is known within the community for its vocational cosmetology program. Other GISD high schools include , , and .

The MISD portion of Garland is served by Price Elementary School, Vanston Middle School, and .

One train track runs parallel to Garland Road, coming out of Mesquite and heading all the way through the other side of Garland City.

As of August 2007, [http://www.garlandpower-light.org/ GPL] cost data and consumer prices are not available to consumers, residents, or the general public. The GP&L 2006 Annual Report reflects a [http://www.garlandpower-light.org/images/06report.pdf $41.8 million net income and cumulative total of $242.8 million in "retained earnings"] from consumers. The city council reviews GP&L data in secret meetings and [http://www.oag.state.tx.us/opinions/orl49cornyn/orl2001/or013500.htm does not make the data available] . The says GP&L is unregulated. The says Texas electric utilities are unregulated by the US Government since Texas is the only state not connected to the national power grid. GP&L claims to be non-profit, but they report [http://www.garlandpower-light.org/images/06report.pdf millions of dollars in profits] that are unaccounted for. Texas law, [http://tlo2.tlc.state.tx.us/statutes/lg.toc.htm Local Government Code §402.902E] , prohibits municipal electric utilities from using profits for any purpose other than to finally pay of bonds; however, the Dallas County District Attorney's office says this law is unenforceable since the Texas Legislature did not provide criminal or civil penalties for violation (Source: See TxLGC §402.902E) According to [http://www.eia.doe.gov/fuelelectric.html US Energy Information Administration] statistics, GP&L customers pay some of the highest rates for electricity in the United States. A prominent former mayor of Garland, Jim Spence, says GPL raised prices in 2004 based on [https://www.powermaxenergy.com/News/News.asp?NewsID=34 "bogus fuel cost data" to generate an average of $12 million for city subsidies] . Texas State Senator John Carona has been instrumental in protecting GP&L profits for the City of Garland. [ [http://www.senate.state.tx.us/75r/senate/members/dist16/pr99/p031599a.htm The Texas State Senate: John Carona Capitol Update ] ]

* [http://www.garlanddowntown.com Historic Downtown Garland]
* [http://www.ci.garland.tx.us/Home/Departments/Recreation+and+Cultural+Services/Garland+Arts/ Patty Granville Arts Center] is a complex owned and operated by the city. Included within the complex are two elegant proscenium theatres which seat 720 and 200, respectively. Also included as part of the complex is the Plaza Theatre, which has seating for 350. The Atrium at the Granville Arts Center is a convert|6500|sqft|m2|sing=on ballroom encased in glass on two sides and opening onto an elegant outdoor courtyard. The Atrium provides civic, community and commercial organizations the opportunity to house banquets, receptions, trade shows, and conventions.
* [http://www.garlandopry.com The Garland Opry] is a non-profit organization which has been providing the Garland community with weekly Country and Gospel music entertainment for over 32 years.
* [http://www.ci.garland.tx.us/Home/Departments/Recreation+and+Cultural+Services/Garland+Arts/PA4+Plaza_landing.htm The Plaza Theater]
* [http://www.ci.garland.tx.us/Home/Departments/Recreation+and+Cultural+Services/Garland+Arts/PA5+Pace+House_landing.htm Pace House]

What is Garland Famous for?

The "" was created by former Garland resident , who used elements of Garland as an inspiration for its setting — the fictional (and similar-sounding) town of Arlen.

Other former and current Garland residents who have gained national and international recognition include singer , actress , musician Dean Sams of the band , singer , singer/songwriter [Austin Cunningham] http:www.austincunningham.com, and r . Sports stars include , Safety and players and . Long before the infamous Waco incident, attended Garland High (he dropped out before graduating).

[http://home.roadrunner.com/~hifiebay/Buck%20Owens%20Postcard.jpgAccording to a postcard from Buck Owens dated 3-31-98 he wrote: "Enclosed autograph. Thought you might get a kick out of knowing (that) Garland, (TX) is where I went to school (grades) 1-2-3 when we decided to move to Calif. (in) 1938- Buck Owens"]

, the creator is best known for creating the "Duke Nukem" series, is in Garland.Some episodes of the television series "" were filmed in Garland, as well as some scenes for the series "". Garland has a street called Star Trek Lane, the first and probably the only official place name of the "" television series created by (who was born in ).

The sport of Agility for dogs all started in Garland, Texas when Kenneth Tatsch, President and USDAA Founder, created [http://www.usdaa.com/ The United States Dog Agility Association] to introduce the sport to north America and to include all breeds of dogs. Founded in 1986, the USDAA is now international and considered the world's largest independent authority for the sport of dog agility, with more than 22,000 registered competitors. The most recent international competition that was held in Garland was at Winter's Park in approximately 2002. The USDAA's corporate office is located at 300 South Kirby Street, Suite 101 in downtown Garland.