Dallas County is a county located in the U.S. state of Texas within the Dallas–Fort Worth–Arlington metropolitan area (colloquially referred to as the Dallas/Fort Worth Metroplex). As of 2010, the county had an official population of 2,368,139 and is now the ninth most populous county in the United States. Dallas county was founded in 1846 and was named for George Mifflin Dallas, the 11th Vice President of the United States.

The Commissioners Court is the policy-making body for the County; in addition, the County Judge is the senior executive and administrative position in the County. While the cities in the County handle many tasks in local government, the County holds responsibility for the following:

"The Commissioners Court sets the County tax rate, adopts the budget, appoints boards and commissions, approves grants and personnel actions, and oversees the administration of county government. Each commissioner also supervises a Road and Bridge District. The Commissioners Court also approves the budget and sets the tax rate for the hospital district, which is charged with the responsibility for providing acute medical care for citizens who otherwise would not receive adequate medical services."[3]

There are 6 congressional districts either entirely or partly within Dallas County. There are 5 Republicans and 1 Democrat.

There are 5 Texas Senate districts either entirely or partly within Dallas County. There are 4 Republicans and 1 Democrat.

There are 16 members of the Texas House of Representatives who are based in Dallas County. There are 10 Republicans and 6 Democrats.

Dallas County has voted for the Republican presidential candidate in almost every election since 1960; the only exceptions being in 1964 and 2008. More recently however, it has gradually shifted more Democratic in recent elections. The Democratic gains are primarily due to the city of Dallas, which has become a stronghold of that party.

In the United States House of Representatives, districts 30 and 32 are entirely within the county and districts 3, 5, 24, and 26 include portions of Dallas County. Five of the six districts are currently represented by Republicans. In order of district number they are Sam Johnson (R-03), Jeb Hensarling (R-05), Kenny Marchant (R-24), Michael C. Burgess (R-26), Eddie Bernice Johnson (D-30), and Pete Sessions (R-32).[6]

†Denotes a municipality whose physical boundaries extend beyond Dallas County

Love Field, located in Dallas and in Dallas County, serves many domestic passengers.

Dallas-Fort Worth International Airport partially located in the city of Irving in Dallas County and Grapevine and Euless in Tarrant County.

Dallas Area Rapid Transit provides bus and rail service to many cities in Dallas County, with Dallas being the largest. 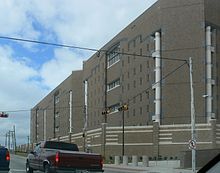