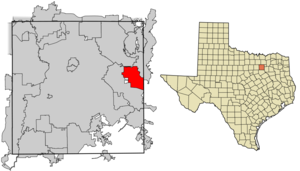 mapsize = 250px
map_caption = Location within and the state of

The town now called Sunnyvale was inhabited by various Native American s in the years before the European conquest of the Americas. It became under the rule of in the 1700s, very close to the boundary of Spanish and French territory (although this boundary was carried upward a bit in 1819; see .) During this time, the area was relatively underdeveloped. However, some settlers migrated to and would eventually settle in Sunnyvale. In 1821, the town became a possession of when Mexico received its independence from Spain. After the , the area once again changed hands, under the . This is when the town started to develop. During this time, settlers migrated to present-day Sunnyvale, naming the hamlet they founded Long Creek. [http://www.townofsunnyvale.org/history.htm|1] . In 1845 became a state. More settlers migrated to the area. In the 1860s, the town was briefly part of the . As more people arrived, eventually three new towns sprang up in the area: New Hope, Tripp, and Hatterville. New Hope was the most prosperous of these. It had many shops and stores, a fair called Gala Days, and a newspaper, the New Hope News. It was neighboring Mesquite's biggest rival. This all ended in 1921, when a storm blew the town away [http://www.townofsunnyvale.org/history.htm|2] . Many buildings were damaged and the prosperous days were over. From this year on to the 1950s, the four towns had new developments, remaining stagnant.In the year 1953, the hamlets of Hatterville, New Hope, Long Creek, and Tripp merged under the name Sunnyvale. The name was chosen in a contest from a local school. Today, there are many reminders of Sunnyvale's rich history, like the old New Hope School; the Tripp First Baptist Church, built in 1882; and many antique houses. The Long Creek Cemetery in southern Sunnyvale is over 150 years old, and the first recorded burial there is that of Leona Crownover Caldwell, dated October 2, 1855. There are also veterans from most major American wars, including the , the Civil War (both Union and Confederate veterans), the , and others. Some of the oldest burials in the cemetery include James Truss and Priscilla Dulaney Truss, both born in 1799 [http://www.longcreekcemetery.com/19.html|2] . Today, this cemetery is a rich reminder of Sunnyvale history.

There were 891 households out of which 43.3% had children under the age of 18 living with them, 78.8% were married couples living together, 5.1% had a female householder with no husband present, and 13.0% were non-families. 11.2% of all households were made up of individuals and 4.5% had someone living alone who was 65 years of age or older. The average household size was 3.02 and the average family size was 3.27.

takes students in Sunnyvale who are in grades Kindergarten through 9.

High school students in Sunnyvale are zoned to high schools in .

The class for will begin in fall 2007 [http://www.dallasnews.com/sharedcontent/dws/news/localnews/tv/stories/DN-sunnyhigh_18eas.ART.East.Edition1.4414685.html] ; SHS will be phased in and serve all of Sunnyvale.