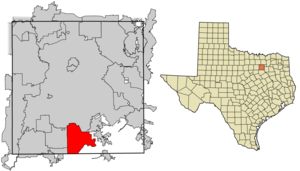 Lancaster is a suburb of Dallas and is part of the Best Southwest area, which includes Lancaster, Cedar Hill, DeSoto, and Duncanville.

Founded in 1852 and incorporated in May 1866, Lancaster was one of the first incorporated communities in Dallas County. "Honest A" Bledsoe is said to have surveyed and staked off the town on the convert|430|acre|km2|sing=on Rawlins survey, modeling it after his hometown of . The city plan features a in the center of a , with streets entering from the middle of each side. [ [http://www.lhsweb.org/history.htm Lancaster Historical Society - A History of Lancaster] Retrieved 17 September 2007.]

During the , Tucker, Sherrod & Company contracted with the State of Texas to manufacture replicas of the .44 caliber from a factory on West Main Street in Lancaster. [ [http://www.tsha.utexas.edu/handbook/online/articles/GG/dlg1.html The Handbook of Texas Online - Gun Manufacturing During the Civil War] Retrieved 17 September 2007.] John M. Crockett, former mayor of Dallas and lieutenant governor of Texas, served as superintendent of the arms factory. [ [http://www.tsha.utexas.edu/handbook/online/articles/CC/fcr25.html The Handbook of Texas Online - CROCKETT, JOHN MCCLANNAHAN] Retrieved 17 September 2007.] In December of 1888, Lancaster's train depot opened as a stop on the Dallas and Waco line, and in 1891, it became part of the (MKT) line, running from Dallas to the Gulf Coast of Texas. [ [http://www.lhsweb.org/depot.htm Lancaster Historical Society - MKT Depot and Rose Garden] Retrieved 17 September 2007.]

In February 1934, Clyde Barrow of fame robbed the R.P. Henry & Sons Bank that was then located near the southeast corner of the town square. Bonnie Parker waited in the getaway car while Clyde and Raymond Hamilton walked in, robbed the bank, and walked out with over $4,000.In 1994 a tornado of F4 intensity ripped through Lancaster, killing 3 people, devastating the Historic Town Square, and damaging or completely destroying 250 homes in the area. [ [http://www.srh.noaa.gov/fwd/CLIMO/annreview/aprcalender.html National Weather Service - North Central Texas Weather Calendar -April] Retrieved 17 September 2007.] The White & Company Bank building, a local since 1898, was severely damaged in the tornado but was rebuilt, and in 1998 reopened as headquarters for the Lancaster Economic Development Corporation. [ [http://www.lancastertx.org/custom2.asp?pageid=251 Lancaster Chamber of Commerce - A Bit of Our History] Retrieved 17 September 2007.]

There were 9,182 households out of which 40.6% had children under the age of 18 living with them, 49.4% were married couples living together, 20.8% had a female householder with no husband present, and 24.9% were non-families. 21.3% of all households were made up of individuals and 6.3% had someone living alone who was 65 years of age or older. The average household size was 2.77 and the average family size was 3.22.

The City of Lancaster is a home-rule city with a council-manager form of government. Under this type of local government, the day-to-day management of the city is directed by a . The city manager is appointed by the city council and serves as chief administrative officer for the city. Rickey C. Childers is the current city manager of Lancaster.

The seven-member city council consists of the mayor, who represents the city as a whole and is elected at-large, and six members elected in single-member districts. At present, the mayor serves a four-year term, but that will be reduced to three years in 2012 following amendments to the city charter approved in late 2006. [ [http://www.lancaster-tx.com/images/stories/CityCouncil/City_Charter_2006.pdf Lancaster City Charter] - City of Lancaster. Retrieved 22 May 2008.] City Council members serve three-year terms.

In 2008, former Councilman, Deputy Mayor Pro Term and Mayoral Candidate Clyde Hairston admitted to taking $4,800 from a Dallas businessman to use his influence to defeat an electoral measure before the city. [ [http://www.dallasnews.com/sharedcontent/dws/news/politics/local/stories/DN-lancelex_08met.ART.South.Edition1.4626576.html Lancaster mayor candidates offer ideas on economic development] ]

Lancaster is served mainly by the and to a lesser extent by the . Lancaster ISD operates nine campuses (one High School, one Middle School, and seven Elementary Schools) with a total enrollment of approximately 6,000 students.

The Dallas ISD portion, which consists of the Cedardale Highlands, Taylor Brothers, and Lancaster Gardens subdivisions, was served by the before Dallas ISD took over the district (Lancaster ISD was given the first option to take over WHISD but declined). Students living in this area are zoned to Birdie Alexander Elementary School, D.A. Hulcy Middle School, and .

Life School, a public charter school, opened a campus in Lancaster in 2007. It serves students in kindergarten through fifth grade. [http://www.lifeschools.net/campuses/lancaster]

, which is part of the (DCCCD), is also located in Lancaster.