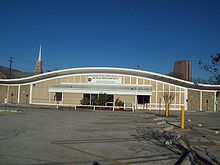 The Dallas Independent School District (Dallas ISD or DISD) is a school district based in Dallas, Texas (USA). Dallas ISD, which operates schools in much of Dallas County, is the second largest school district in Texas and the twelfth largest in the United States.

In 2009, the school district was rated "academically acceptable" by the Texas Education Agency.[4]

Dallas ISD covers 312.6 square miles (809.6 km2) of land (map) and most of the city of Dallas. The district also serves Cockrell Hill, most of Seagoville and Addison, Wilmer, most of Hutchins, and portions of the following cities:

In addition, Dallas ISD covers unincorporated areas of Dallas County, including some areas with Ferris addresses.

The Dallas public school district in its current form was first established in Dallas in 1884,[5] although there is evidence that public schools had existed for Dallas prior to that date.[6] Mayor W. L. Cabell ordered just one month after the June 16, 1884, district founding that "all former Orindances in relation to the city public school are hereby repealed," and the district's 1884-85 superintendent, a Mr. Boles, had enrollment figures for each year from 1880 through his own tenure;[7] furthermore, the Dallas Directory of 1873 expressed regret that "there are no public schools in Dallas," while the 1875 Directory said that "the schools are near perfection."[8] The 1884 organizational meeting coincides with changes in statewide education law establishing a system of school districts, each to be assigned its own number, with the ability to levy taxes and raise funds as well as to determine the length of school terms and other educational decisions; the state superintendent of schools, Benjamin M. Baker, also praised the new law's abandonment of tying teachers' salaries to the number of pupils attending, a practice he called "a relic of barbarism."[9]

At the time of the 1884 organization, six schools already were operating; four schools were designated for whites and two for "colored,"[10] as segregation was the legal policy at the time. Booker T. Washington High School is one of these original schools, beginning as "Colored School No. 2" in 1884 and adopting its later name in 1902.[11]

Other schools and school districts annexed by Dallas ISD include:

The school system expanded from offering 11 grades to a modern 12-year program as of 1941. Initially, the change was resisted by families who felt the additional year would be too expensive, though others promoted the addition of a further year of athletics and some anticipated an ability for gifted students to finish the 12-year program in as little as 10.5 years, although that hope did not prove a reality.[14] The period from 1946-1966 saw rapid construction of schools, with 97 of the district's school buildings erected during this period, at a peak of 17 schools in 1956 alone.[15]

School desegregation was a gradual process that did not begin for nearly six years after the United States Supreme Court made its May 17, 1954, Brown v. Board of Education decision, nullifying the previous doctrine of "separate but equal" public facilities. The Dallas school board commissioned studies over the next several months, deciding in August, 1956, that desegregation was premature and that the segregated system would stay in place for 1956-57.[16] Texas passed legislation in 1957 requiring that districts not integrate their schools unless district residents voted to approve the change; an August, 1960, election for this purpose ended with voters rejecting desegregation. Meanwhile, a lawsuit was filed by the district against the state superintendent on August 13, 1958, with the goal of a resolution of conflicts between federal and state courts on the subject of integration.[16]

In 1960 the district initially adopted a plan to desegregate grade by grade, starting with the 1961 first-grade class, and proceed year by year until desegregation had been achieved; the plan was amended only weeks later to provide for movement of students at parent request. The year 1965 brought substantial changes to this process, as on September 1, 1965, the elementary schools were ordered desegregated, initially to be followed by the junior high schools in 1966 and the senior high schools in 1967; however, the Fifth Circuit United States Court issued an order on September 7 that led to amending the ruling so that all twelve grades must be desegregated as of September 1, 1965.[16] A book on the history of DISD published the following year by the school district made the statement, "Desegregation of the Dallas Schools was accomplished in the course of ten short years with a minimum of commotion and stress ... [due to] the patient and sympathetic understanding ... and the flinty determination of the School Board ... to serve the public in their lawfully constituted duty."[17] In September 1967 Dallas ISD states that its schools were desegregated.[18] During another desegregation suit in the 1970s, a judge suggested that students from different schools could interact via television instead of forcing desegregation busing in the district. The judge liked the plan, while the parties filing suit did not.[19]

After the desegregation, in the 1970s many White American students and families withdrew from district schools en masse.[20]

In 1996 DISD announced that it would en masse rezone many areas to different schools. DISD officials said that the rezoning, which would affect over 40 campuses, would be the largest such rezoning since at least the 1950s.[21]

In the summer of 2005, the Texas Education Agency (TEA) ordered the Wilmer-Hutchins Independent School District closed for the 2005-2006 school year due to financial stress and reported mismanagement. After negotiations, Dallas ISD agreed to accept the students for the 2005-2006 school year. The Wilmer-Hutchins ISD district was absorbed into Dallas ISD in summer 2006.

From 2005 to 2007, several northwest Dallas area public schools under Dallas ISD jurisdiction became infamous due to the outbreak of a Dallas-area recreational drug, a version of heroin mixed with Tylenol PM, called "cheese," which led to several deaths of students. Dallas ISD issued drug dog searches to schools in order to combat the problem.

City of Farmers Branch attempt to Separate from DISD

Dallas ISD was reported in April 2008 to have the 7th highest dropout rate of any urban school district in the US.[24] All 6 cities with higher dropout rates than Dallas in this study were smaller cities with under a million population.

Using four major indicators for dropout rate patterns, the Dallas ISD is improving as of November 2009 in all four indicators. This progress has been consistent for almost four years for all measurements.[27]

In 2009 state representative Yvonne Davis proposed a bill which would force the state to divide any school district that meets several parameters. The parameters include the district having more than 150,000 students, the district residing in a county with more than two million residents, and the resident county being adjacent to at least one other county with more than one million residents. The bill does not name any particular school district, but the parameters of the bill may only apply to Dallas ISD.[28]

Dallas ISD implemented mandatory school uniforms for all elementary and middle school students (through 8th grade) on most campuses starting in the 2005-2006 school year.[29]

Elementary and middle school campuses which do not follow the Dallas ISD uniform policy continue to use their own mandatory uniform codes, which were adopted prior to the 2005-2006 school year.

Uniforms are optional at the high school level as in schools decide whether to adopt uniform policies; eight traditional high schools and three alternative high schools have adopted them.

The Texas Education Agency specified that the parents and/or guardians of students zoned to a school with uniforms may apply for a waiver to opt out of the uniform policy so their children do not have to wear the uniform; parents must specify "bona fide" reasons, such as religious reasons or philosophical objections.[30]

A more detailed enrollment of Dallas ISD students by grade from the years 1997 through 2008 as reported to the Texas Education Agency is compiled into a spreadsheet at http://www.studentmotivation.org/DallasISD.htm.