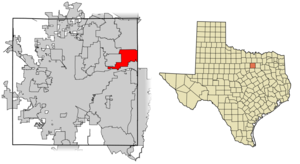 Euless is a city in Tarrant County, , . Euless is part of the between Dallas and Fort Worth. The population was 51,226 in a 2005 census estimate.

Part of , which serves the cities of Dallas and Fort Worth, is inside the city limits of Euless.

There were 19,218 households out of which 31.6% had children under the age of 18 living with them, 45.3% were married couples living together, 10.9% had a female householder with no husband present, and 39.5% were non-families. 31.0% of all households were made up of individuals and 3.0% had someone living alone who was 65 years of age or older. The average household size was 2.38 and the average family size was 3.05. 1.26% of Euless households are same sex couples, giving Euless the ninth highest percentage of same sex couples among cities in Texas with over 50 same sex couples.

Most of Euless is served by the . Together with most of Hurst and Bedford, this area forms one of the largest recognized school districts in the state.fact|date=June 2007

Euless has seven , two , and one . Some residents of the city of Euless attend schools in the such as Bear Creek Elementary, Heritage Middle School, and . Together in HEBISD there are 19 elementary schools, five junior high schools, and two high schools.

On December 10, 2005, Euless's Trinity High School won the 5A Division 1 state football championship. The team has achieved national notoriety for its pre-game and post-game ritual dance, the , started by several players of n descent.

This list may include past and current residents of the community
*: Former president of the and former pastor of First Church in Euless
*: Model and contestant on "Big Brother 5"