The Texas Department of Transportation (TxDOT) is a governmental agency and its purpose is to "provide safe, effective, and efficient movement of people and goods" throughout the state.[1] Though the public face of the agency is generally associated with maintenance of the state's immense highway system, the agency is also responsible for aviation in the state and overseeing public transportation systems. 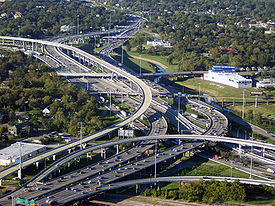 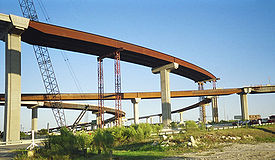 State Highway 45, the first of several toll roads in Central Texas, under construction

Texas freeways have been heavily traveled since their 1948 beginnings with a several-mile stretch of Houston's Gulf Freeway, and are often under construction to meet the demands of continuing growth. As of 2005, there were 79,535 miles of public highway in Texas (up from 71,000 in 1984). Texas Department of Transportation (TxDOT) planners have sought ways to reduce rush hour congestion, primarily through High-occupancy vehicle (HOV) lanes for vans and carpools. The "Texas T", an innovation originally introduced in Houston, is a ramp design that allows vehicles in the HOV lane, which is usually the center lane, to exit directly to transit centers or to enter the freeway directly into the HOV lane without crossing multiple lanes of traffic. Timed freeway entrances, which regulate the addition of cars to the freeway, are also common. Houston and San Antonio have extensive networks of freeway cameras linked to transit control centers to monitor and study traffic.

One characteristic of Texas's freeways are its frontage roads (also known as service roads, feeder roads, and access roads). Texas is the only state that widely constructs frontage/access roads along its highways even in the most remote areas.[1] Frontage roads provide access to the freeway from businesses alongside, such as gas stations and retail stores, and vice versa. Alongside most freeways along with the frontage roads are two to four lanes in each direction parallel to the freeway permitting easy access to individual city streets. A TxDOT policy change now limits the frontage road construction for new highways, but the existing frontage will remain. New landscaping projects and a longstanding ban on new billboards are ways Houston has tried to control the potential side effects of convenience.

Another common characteristic found near Texas overpasses are the Texas U-turns which is a lane allowing cars traveling on one side of a one-way frontage road to U-turn into the opposite frontage road (typically crossing over or under a freeway or expressway) without being stopped by traffic lights or crossing the highway traffic at-grade. 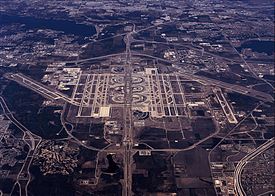 The Dallas-Fort Worth International Airport, located nearly equidistant from downtown Dallas and downtown Fort Worth, is the largest airport in the state, the second largest in the United States, and fourth largest in the world.

Southwest Airlines, the largest domestic carrier in the United States began its operations at Dallas Love Field.[3] and is still headquartered in Dallas, Texas. It is the largest airline in the United States by number of passengers carried domestically per year and the second largest airline in the world by number of passengers carried.[4]

Part of the state's cowboy legends are based on cattle drives where livestock was herded from Texas to railroads in Kansas. The first railroad in Texas completed in 1872, the Missouri-Kansas-Texas Railroad, diminished the need for these drives. The desire for the benefits of railroads was so strong that Dallasites paid $5,000 for the Houston and Central Texas Railroad to shift its route through its location, rather than Corsicana as planned.[5] Since 1911, Texas has led the nation in railroad length. Texas railway mileage peaked in 1932 at 17,078 miles (27,484 km), but since has dwindled to 14,006 miles (22,540 km) in 2000.[6] The state's oldest regulatory agency, the Railroad Commission of Texas, originally regulated the railroads, but in 2005, the state transferred to these duties to TxDOT.[7] 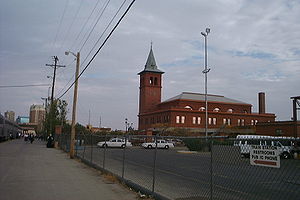 Passenger rail service in Texas is at this moment extremely limited from both network viewpoint (with only three routes) and frequency viewpoint (only daily or tri-weekly service), and is certainly to be considered below par for a developed state. 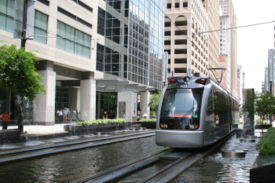 Dallas Area Rapid Transit (DART) is the Dallas area public transportation authority, providing buses, rail, and HOV lanes. DART began operating the first light rail system in the Southwest United States in 1996 and continues to expand its coverage. The DART light rail system remained the only one in Texas until METRORail opened in Houston in 2004.

The Metropolitan Transit Authority of Harris County, Texas (METRO) operates bus, lift bus, light rail, and bus rapid transit service in Harris County, which includes Houston. METRO also operates bus service to two cities in Fort Bend County. METRO began running light rail service (METRORail) in Houston on January 1, 2004. Currently the track is rather short, running only 8 miles (13 km) from Downtown Houston to the Texas Medical Center and Reliant Park. However, construction begun in 2008 on a 30-mile extension of the light rail system that is planned to be complete by 2012.

VIA Metropolitan Transit (VIA for short) operates bus service in the San Antonio area. VIA is expected to add bus rapid transit service to the area by 2012.

The Capital Metropolitan Transportation Authority (Capital Metro) operates bus service throughout the city of Austin and will add a starter commuter rail line in 2009.

The Brownsville Urban System operates bus service throughout the city of Brownsville, Texas.

Although located in the middle of the service areas of DART, the Fort Worth Transportation Authority, and the Trinity Railway Express that connects the two, the city of Arlington remains the largest city in the United States that is not served by a public transportation system.

Main article: List of ports in the United States

Over 1,000 seaports dot Texas's coast with over 1,000 miles (1,600 km) of channels.[8] Ports employ nearly one-million people and handle and average of 317 million metric tons.[9] Texas ports are connected with the rest of the US Atlantic seaboard in the Gulf section of the Intracoastal Waterway.[8] Until the deadliest hurricane in US history of 1900, the state's primary port, was Galveston. The Port of Houston replaced Galveston and today is the busiest port in the United States in foreign tonnage, second in overall tonnage, and tenth worldwide tonnage.[10] The Houston Ship Channel is currently 530 feet (160 m) wide by 45 feet (14 m) deep by 50 miles (80 km) long and continues to be expanded.[11]

The Trans-Texas Corridor (TTC) is a transportation network in the planning and early construction stages in the U.S. state of Texas. The network, as planned, would be composed of a 4,000-mile (6,000 km) network of supercorridors up to 1,200 feet (370 m) wide to carry parallel links of tollways, rails, and utility lines.[12] The tollway portion would be divided into two separate elements: truck lanes and lanes for passenger vehicles. Similarly, the rail lines in the corridor would be divided among freight, commuter, and high-speed rail. The Texas Department of Transportation intends to "charge public and private concerns for utility, commodity or data transmission" within the corridor,[13] in essence creating a toll road for services such as water, electricity, natural gas, petroleum, fiber optic lines, and other telecommunications services. Governor Rick Perry, hopes the Trans-Texas Corridor will allow passenger vehicular speed limits of up to 85 mph (140 km/h).[14] The network will be funded by private investors and built and expanded as demand warrants.