mapsize = 250px
map_caption = Location within the state of 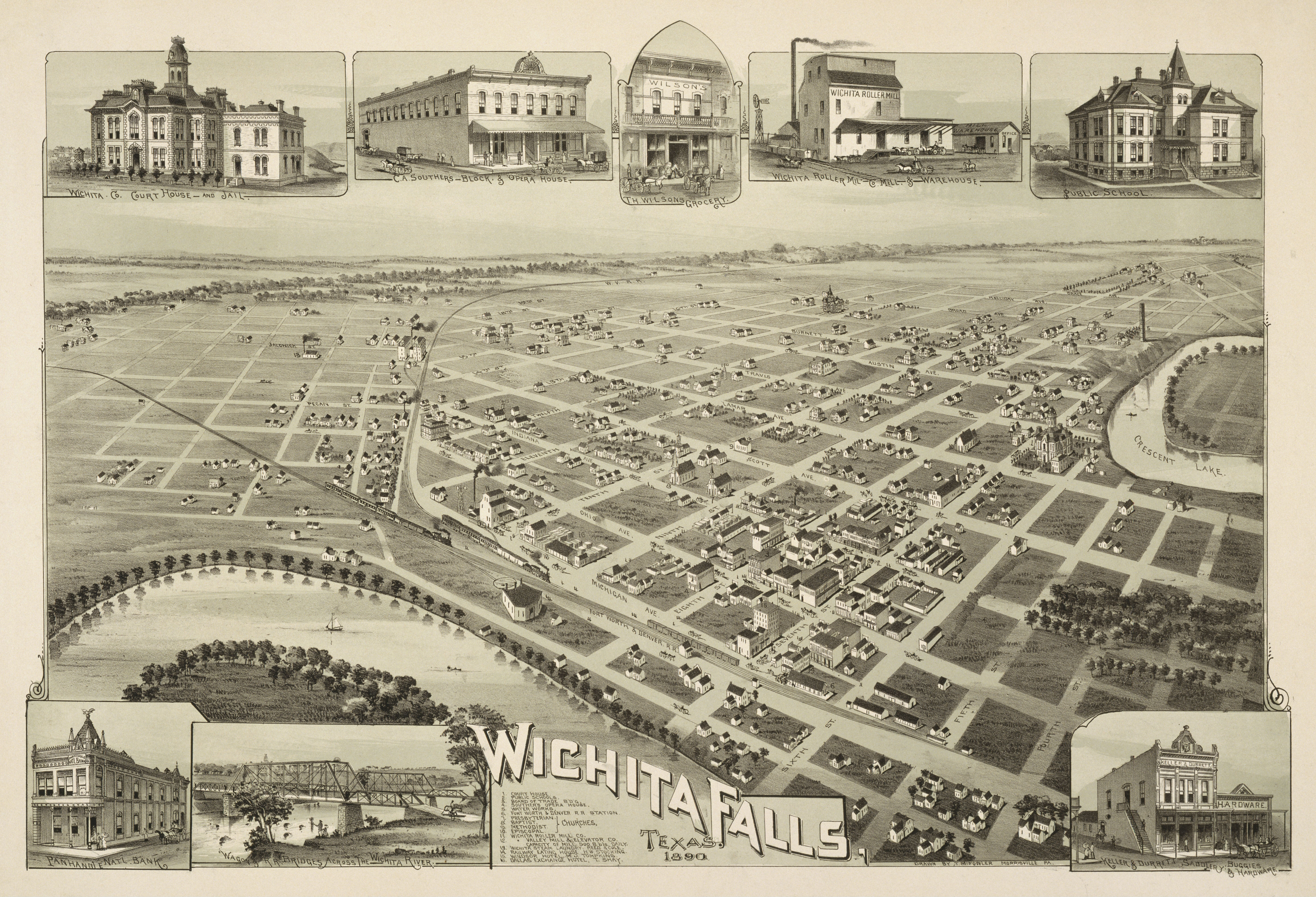 , a base, is located in Wichita Falls.

Wichita Falls is sister city to in , .

The settled the area in the early

A flood in destroyed the original falls on the for which the city was named. After nearly 100 years of visitors wanting to visit the non-existent falls, the city built an artificial waterfall beside the river in Lucy Park. The recreated falls are 54 feet high and recirculates at 3,500 gallons per minute. They are visible to south-bound traffic on Interstate 44.

The city is currently seeking funding to rebuild and restore the downtown area. Downtown Wichita Falls was once the city's main shopping area for many years, but lost ground to the creation of new shopping centers throughout the city beginning with Parker Square in 1953 and other similar developments during the 1960s and 1970s, culminating with the opening of Sikes Senter Mall in 1974. The last surviving major downtown retail store, Sears, moved to Sikes Senter in 1990. The former downtown Sears building, constructed in 1967, covered an entire city block and featured "roof top" parking.

Wichita Falls was once home to offices of several oil companies and related industries, along with oil refineries operated by the Continental Oil Company (now ConocoPhillips) until 1952 and Panhandle Oil Company (later American Petrofina) until 1965. Both firms continued to utilize a portion of their former refineries as gasoline/oil terminal facilities for many years.

Wichita Falls has one of the largest numbers of freeway mileage for a city of its size as a result of a 1954 bond issue approved by city and county voters to purchase right-of-way for several expressway routes through the city and county, the first of which was opened in 1958 as an alignment of U.S. 287 from Eighth Street at Broad and Holliday streets northwestward across the Wichita River and bisecting Lucy and Scotland parks to the Old Iowa Park Road, which was the original U.S. 287 alignment. That was followed by other expressway links including U.S. 82-287 east to Henrietta (completed in 1968), U.S. 281 south toward Jacksboro (completed 1969), U.S. 287 northwest to Iowa Park and Electra (opened 1961), U.S. 277-281 north to Burkburnett and the Red River (opened 1964), and Spur 325 from the U.S. 277-281-287 interchange on the city's north side to the main gate of Sheppard Air Force Base (completed in 1959). However, cross-country traffic for many years had to contend with several ground-level intersections and stop lights over Holliday and Broad streets near the downtown area for approximately 13 blocks between connecting expressway links until a new elevated freeway running overhead was completed in 2001.

Efforts to create an additional freeway along the path of Kell Boulevard for U.S. 82-277 began in 1967 with the acquisition of right-of-way that included a former railroad right-of-way and the first project including construction of the present frontage roads completed in 1977, followed by freeway lanes, overpasses and on/off ramps in 1989 from just east of Brook Avenue west to Kemp Boulevard; and similar projects west from Kemp to Barnett Road in 2001 followed by one now under construction from Barnett Road west past FM 369 to tie in which a project now underway to transform U.S. 277 into a continuous four-lane expressway between Wichita Falls and Abilene.

The is served by American Eagle with six flights daily to the . The and the serve smaller, private planes.

provides intercity service from Wichita Falls to other locations served by Greyhound. Skylark Van Service shuttles passengers to and from DFW on several runs during the day all week long.

Wichita Falls is home to , an accredited 4-year offering both bachelor's and master's degrees. A local branch of nearby offers two-year degrees, certificate programs, and workforce development programs.

Public primary and secondary education is covered by the , the , and the Bright Ideas Charter School. There are several s, the largest of which is Notre Dame Catholic school. Other s operate in the city, as does an active home-school community. Many of the local elementary schools participate in the program for preschool-aged children. The Wichita Falls ISD is one of only a handful of school districts in Texas that does not require its students to attend a particular school in the district based on their residency. Instead, all schools have magnet programs to attract students, such as the Washington Jackson Math & Science Center.

Four schools in the Wichita Falls Independent School District participate in the programmes. offers the . Three others are candidate schools: G.H. Kirby Junior High School for the ; and Washington/Jackson Math/Science Center and Lamar Primary Center for the .

Other public high schools are and (Wichita Falls ISD) and (City View ISD).

Wichita Falls is the home of the annual , the largest century bicycle ride in the US.

The city has been home to a number of semi-pro, development, and minor league sports teams, including the , a semi-pro football team that has won numerous league titles and a national championship; , another semi-pro football team; of the ; in the (1989-92); the baseball team in the ; the (formerly the Wichita Falls Rustlers) of the , an American "Junior A" Hockey league; and the (formerly the Graham Roughnecks) of the .

Lucy Park is a 170-acre park with a log cabin, duck pond, playground, a course, and picnic areas. It has multiple paved walkways suitable for walking, running, biking, or rollerskating, including a river walk that goes to the Falls. There are also unpaved trails for off-road biking and hiking.

A devastating tornado hit the north and northwest portions of Wichita Falls along with Sheppard Air Force Base during the afternoon of April 3, 1964. That tornado left 7 dead, more than 100 injured and approximately $15 million in damage approximately 225 homes and businesses. This tornado was also among the first in the nation to be broadcast on live television through warning coverage by Channel 6 thanks to efforts by station officials to drag a studio camera outside and point it toward the funnel from outside the station as it was approaching the city's northwest edge. Channel 3 also provided live tornado warning coverage in which news reporters were out in the field to report on the tornado's movement and later the aftermath utilizing two-way radio communication with news director Fred Brooks and weathercaster Ben Strickland back at the studio. Also, a photographer shot a photo of the funnel as it was approaching Sheppard Air Force Base from the roof of the newspaper's downtown offices.

Another major tornado hit Wichita Falls six years earlier in April 2, 1958. This funnel touched down at Fourth and Lamar streets in the downtown area and stayed on the ground for 16 miles, killing a dairy farmer in Dean, Texas, which is located on State Highway 79 northeast of Wichita Falls.

A large F4 struck the heavily populated southern sections of Wichita Falls in the late afternoon on Tuesday, April 10, 1979 (still known locally as "Terrible Tuesday"). The storm was part of a record outbreak [http://www.srh.noaa.gov/oun/storms/19790410/disaster.php] that produced 30 tornadoes around the region. Despite having nearly an hour's advance warning that was imminent, 45 people were killed (25 in vehicles) and 1,800 were injured just in time for many people to be driving home from work. The tornado left 20,000 people homeless and did $400 million in damage in 1979 dollars, a U.S. record not topped by an individual tornado until the F5 Moore-Oklahoma City tornado of May 3, 1999. [ [http://www.srh.noaa.gov/oun/storms/19990503/ NWS Norman, Oklahoma - The Great Plains Tornado Outbreak of May 3-4, 1999 ] ] A total of 54 people were killed, 52 that Tuesday and two within a week due to injuries.