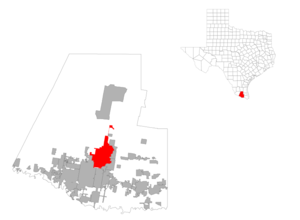 Edinburg is one of the principal cities of the McAllen&ndash;Edinburg&ndash;Mission Metropolitan Statistical Area, which includes all of Hidalgo County.

This city is the home of the and the , a team in the .

In 1908, John Closner, William Briggs, Argyle McAllen, Plutarco de la Viña, and Dennis B. Chapin developed a new community (the town square of which is now located at the crossroads of and State Highway 107). The town was named Chapin in honor of one of the developers. It became the of Hidalgo County in a dramatic, nighttime covert operation in which the county records were removed from the previous county seat, .Facts|date=April 2008 When Dennis Chapin was involved in a murder, the community changed its name to Edinburg to honor a prominent businessman who was born in , .Facts|date=April 2008 Edinburg incorporated in 1919.

There were 14,183 households out of which 46.9% had children under the age of 18 living with them, 56.9% were married couples living together, 19.0% had a female householder with no husband present, and 19.5% were non-families. 15.4% of all households were made up of individuals and 5.5% had someone living alone who was 65 years of age or older. The average household size was 3.29 and the average family size was 3.71.

Edinburg is the home of the and the .

Almost all of the city is served by the , comprising three high schools, one alternative secondary school, five middle schools, and 20 of the District's elementary schools. A small portion is served by the , including Memorial High School, Lamar Academy, Cathey Middle School, and McAllen's Gonzalez Elementary.

In addition, operates magnet schools that serve Edinburg and many surrounding communities. These include the Science Academy of South Texas, the High School for the Health Professions and the Academy for Medical Technology high schools. (BETA) is in Edinburg.

The Catholic Diocese of Brownsville operates St. Joseph Catholic School, an elementary and middle school. The Diocese has announced that it will open San Juan Diego Regional Catholic High School in Edinburg in Fall 2009.

Edinburg is home to the , formerly the Hidalgo County Historical Museum.

Edinburg is also the home of two(2) prisons operated by the Texas Department of Criminal Justice. [http://www.tdcj.state.tx.us/]