A German Autobahn in Lehrte. 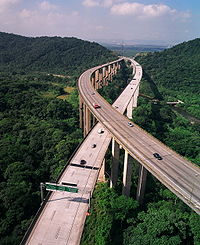 The SP-160, known as Rodovia dos Imigrantes, in southeastern Brazil. 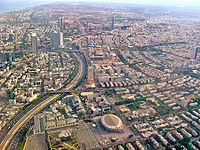 Major highways are often named and numbered by the governments that typically develop and maintain them. Australia's Highway 1 is the longest national highway in the world at over 14,500 km (9,000 mi) and runs almost the entire way around the continent. The United States has the world's largest network of highways, including both the Interstate Highway System and the U.S. Highway System. At least one of these networks is present in every state and they interconnect most major cities. Some highways, like the Pan-American Highway or the European routes, span multiple countries. Some major highway routes include ferry services, such as U.S. Route 10, which crosses Lake Michigan.

Traditionally highways were used by people on foot or on horses. Later they also accommodated carriages, bicycles and eventually motor cars, facilitated by advancements in road construction. In the 1920s and 1930s many nations began investing heavily in progressively more modern highway systems to spur commerce and bolster national defense.

Major modern highways that connect cities in populous developed and developing countries usually incorporate features intended to enhance the road's capacity, efficiency, and safety to various degrees. Such features include a reduction in the number of locations for user access, the use of dual carriageways with two or more lanes on each carriageway, and grade-separated junctions with other roads and modes of transport. These features are typically present on highways built as motorways (freeways).

In English law, parliament and more formal situations the term is used to denote any public road used which include streets and lanes as well as main roads, trunk roads and motorways. Acts of parliament have used the term throughout history from the Highways Act 1555 through to the Highways Act 1980. The rules of the road are outlined in the Highway Code.

In England and Wales, a "Public Highway" is a road or footpath over which the public has the right of access, i.e. the opposite of a "private road".

In American law, the word "highway" is sometimes used to denote any public way used for travel, whether major highway, freeway, turnpike, street, lane, alley, pathway, dirt track, footpaths, and trails, and navigable waterways;[citation needed] however, in practical and useful meaning, a "highway" is a major and significant, well-constructed road that is capable of carrying reasonably heavy to extremely heavy traffic.[citation needed] Highways generally have a route number designated by the state and federal road comptroller offices.[clarification needed]

California Vehicle Code, Sections 360, 590, define a "highway" as only a way open for use of motor vehicles, but the California Supreme Court has held that "the definition of 'highway' in the Vehicle Code is used for special purposes of that act," and that canals in the town of Venice, California, are "highways" that are entitled to be maintained with state highway funds.[citation needed]

Smaller roads may be termed byways.[1]

A German autobahn in the 1930s
See also: Road and History of road transport

Modern highway systems developed in the 20th century as the automobile gained popularity. The world's first limited access road was constructed in Italy in 1922 (see autostrade).[2] Construction of the Bonn-Cologne autobahn began in 1929 and was opened in 1932 by the mayor of Cologne.[3]

The Special Roads Act 1949 in the United Kingdom provided the legislative basis for roads for restricted classes of vehicles (later termed motorway).[4] The first section of motorway in the UK opened in 1958 (part of the M6 motorway) and then in 1959 the first section of the M1 motorway.[5]

Reducing travel times relative to city or town streets, modern highways with limited access and grade separation create increased opportunities for people to travel for business, trade or pleasure and also provide trade routes for goods. Modern highways reduce commute and other travel time but additional road capacity can also create new induced traffic demand. If not accurately predicted at the planning stage, this extra traffic may lead to the new road becoming congested sooner than anticipated. More roads add on to car-dependence, which can mean that a new road brings only short-term mitigation of traffic congestion.

Where highways are created through existing communities, there can be reduced community cohesion and more difficult local access. Consequently property values have decreased in many cutoff neighborhoods, leading to decreased housing quality over time.

In transport, demand can be measured in numbers of journeys made or in total distance travelled across all journeys (e.g. passenger-kilometres for public transport or vehicle-kilometres of travel (VKT) for private transport). Supply is considered to be a measure of capacity. The price of the good (travel) is measured using the generalised cost of travel, which includes both money and time expenditure.

The effect of increases in supply (capacity) are of particular interest in transport economics (see induced demand), as the potential environmental consequences are significant (see externalities below).

Noise, light and air pollution are negative environmental effects highways can have on their surroundings.
Main article: Environmental impacts of roads

Air quality issues: Highways may contribute fewer emissions than arterials carrying the same vehicle volumes. This is because high, constant-speed operation creates an emissions reduction compared to vehicular flows with stops and starts. However, concentrations of air pollutants near highways may be higher due to increased traffic volumes. Therefore, the risk of exposure to elevated levels of air pollutants from a highway may be considerable, and further magnified when highways have traffic congestion.

New highways can also cause habitat fragmentation, encourage urban sprawl and allow human intrusion into previously untouched areas, as well as (counterintuitively) increasing congestion, by increasing the number of intersections. They can also reduce the use of public transport, indirectly leading to greater pollution.

High-occupancy vehicle lanes are being added to some newer/reconstructed highways in North America and other countries around the world to encourage carpooling and mass-transit. These lanes help reduce the number of cars on the highway and thus reduces pollution and traffic congestion by promoting the use of carpooling in order to be able to use these lanes. However, they tend to require dedicated lanes on a highway, which makes them difficult to construct in dense urban areas where they are the most effective.

Road traffic safety aims to reduce the harm (deaths, injuries, and property damage) on the highway system from traffic collisions and includes the design, construction and regulation of the roads, the vehicles that use them and also the training of drivers and other road-users. Improvement of road safety needs to be balanced with the provision of an effective efficient transport system. A report published by the World Health Organization in 2004 estimated that some 1.2m people were killed and 50m injured on the roads around the world each year[10] and was the leading cause of death among children 10 – 19 years of age. The report also noted that the problem was most severe in developing countries and that simple prevention measures could halve the number of deaths.[11] For reasons of clear data collection, only harm involving a road vehicle is included.[citation needed] A person tripping with fatal consequences or dying for some unrelated reason on a public road is not included in the relevant statistics. 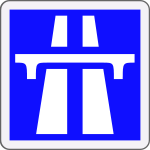 International sign used widely in Europe denoting the start of special restrictions for a section of highway.

The United States has the world's largest network of highways, including both the Interstate Highway System and the U.S. Highway System. At least one of these networks is present in every state and they interconnect most major cities. 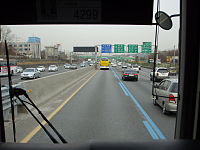 In South Korea, in February 1995 - Bus lane (essentially an HOV-9) established between the northern terminus and Sintanjin for important holidays and in 1 July 2008 - Bus lane enforcement between Seoul and Osan (Sintanjin on weekends) becomes daily between 6 AM and 10 PM. On 1 October this is adjusted to 7 AM to 9 PM weekdays, 9 AM to 9 PM weekends.

In Hong Kong, some highways are set up with bus lanes to solve the traffic congestion.

Traffic Congestion was a principal problem in major roads and highways in the Philippines, especially in Metro Manila and other major cities. The government decided to set up some bus lanes in Metro Manila like in the Epifanio delos Santos Avenue.

For information on the history and local styles of highways around the world, refer to

This highway uses asphalt and concrete pavement, both of which are popular road surfaces on highways.