Kuwait City (Arabic: مدينة الكويت, transliteration: Madīnat al-Kuwayt), is the capital of Kuwait. It has a population of 2.38 million in the metropolitan area. Located at the heart of the country on the shore of the Persian Gulf, and containing Kuwait's parliament (Majlis Al-Umma), most governmental offices, the headquarters of most Kuwaiti corporations and banks, it is the political, cultural and economic center of the emirate. 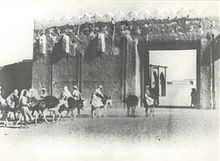 Kuwait City was first settled in the early 18th Century by the Al-Sabāh clan, later the ruling family of Kuwait and a branch of the Al-Utūb tribe (that also included the Al-Khalīfah clan, the ruling family of Bahrain), and their leader, Sheikh Sabāh I. Its name may have derived from an earlier abandoned fort located there, called "Kūt" (كوت) – Arabic for a fortress by the sea.

The settlement grew quickly, and by the time its first wall was built (1760), the town had its own dhow fleet of about 800 and trading relations to Baghdad and Damascus. It was a successful and thriving sea port by the early 19th Century.

It was unclear whether Kuwait was part of the Ottoman Empire, and as a result, tensions often broke out between the sheikhdom and the empire. These tensions peaked when, in 1896, Sheikh Mubārak Al-Sabāh assassinated his brother, the emir Muhammad Al-Sabāh, over Mubārak's deep suspicion that the Ottoman Empire was willing to annex Kuwait.

In exchange for British naval protection, Mubārak was not to negotiate or give territory to any other foreign power without British consent. With the discovery of oil in 1936, the city’s standard of living improved dramatically, including health and education services.

On August 2, 1990, Iraqi forces seized the city and on August 8 they annexed the emirate.[2] During the occupation, the city was extensively damaged and many buildings were destroyed after it, including the Kuwait National Museum.

After Iraqi forces retreated from Kuwait in January–February 1991, foreign investors and the Kuwaiti government were actively involved in modernizing the city and turning it into a world-class business hub. Many hotels, shopping malls and offices were built in the city indicating the economic growth since the war.

Summer temperatures range from 38 to 46 degrees Celsius. A summer heat wave can see temperatures soar as high as 50 degrees, and higher. Winters are much cooler than summer.

Summer rainfall is very rare, and normally non-existent. The wettest month is January, typically with only five days of any rain. Rain may occur in the spring and its frequency increases around November. On average, Kuwait City sees about 22 wet days, and 343 dry days. 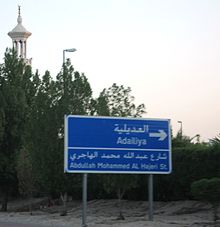 Although the districts below are not usually recognized as suburbs, the following is a list of a few areas surrounding Kuwait city:

Kuwait’s booming economy has allowed many international hotel chains to enter agreements to open hotels in the country. According to the Kuwait Hotel Owners Association, over twenty-five new hotels are planned or in construction, including the following:

By 2012, over 3,000 rooms are expected to be added to Kuwait’s current hotel inventory.

The city is also home to a large variety of shopping malls, which serve as the basis of Kuwaiti social life. Famous malls such as the Avenues, Marina World and the 360 Mall house many internationally-renowned retail and food/beverage brands, as well as provide sheltered, indoor areas to relax. Several more, such as the Mall of Kuwait, the Al Hamra Center and Symphony Centre are expected to enter service within the next five years.

In 2008, a railway network connecting Arab states of the Persian Gulf was proposed, although work is yet to start.[4] A metro network was designed, with four lines and stations across the entire city and suburbs. Although it has faced considerable delays, the project is expected to commence construction sometime in 2011 and open parts of the first two lines by July 2016.

Kuwait International Airport is the primary airport for the country serving a wide variety of local and international destinations.

Kuwait City is twinned with: