Manama
This article is about the capital of Bahrain. For the city in Ajman, see Manama, Ajman.

Manama (Arabic: المنامة‎ Al Manāma) is the capital and largest city of Bahrain, with an approximate population of 155,000 people.

Long an important trading center in the Persian Gulf, Manama is home to a very diverse population. After periods of Portuguese and Persian control and invasions from the Al Sauds and Oman, Bahrain established itself as an independent nation during the 19th century period of British hegemony. In the 20th century, Bahrain's oil wealth helped spur fast growth and in the 1990s a concerted diversification effort lead to expansion in other industries and helped transform Manama into an important financial hub in the Middle East.

Manama was mentioned in Islamic chronicles at least as far back as 1345. It was conquered by Portugal in 1521 and then by the Persians in 1602.[1] Since [1783] it has been under the control of the Al-Khalifa dynasty. Manama was declared a free port in 1958, and in 1971 it became the capital of independent Bahrain.[2]

The north of Bahrain’s main island, which is dominated by Manama today, has seen human activity for roughly 5,000 years, as is indicated from the remains around Bahrain Fort. Early inhabitants are often associated with the historical Dilmun Civilisation though the historical records of Dilmun are scanty. The islanders were soon, however, disturbed by a series of invaders, beginning with the Assyrians during the BC period and ending with the Arabs. During these many centuries Bahrain was a trading post whose importance fluctuated depending on which empire dominated. Manama and its inhabitants were first introduced to Islam during the 7th century and by the 9th century began to lean to a more conservative almost socialist belief system that caused considerable friction with the surrounding Muslim lands. The Qarmatians, as this group was known, ransacked Mecca in 930 during the sacred Hajj, killing hundreds before escaping with the much revered Black Stone. A feud with the Baghdad-based Abbasids less than 50 years later saw the Qarmatians leave the town. 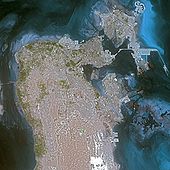 Manama seen from a SPOT satellite.

The next major foreign intervention in Bahrain came at the beginning of the 16th century when the Portuguese naval fleets arrived, quickly crushing the small local population in Manama and the surrounding areas. Bahrain Fort was built during this era, probably to keep out the Persians who nevertheless managed a series of invasions as the whole island alternated between the Portuguese, Persians, and Omanis for the following two centuries. Once the Persians eventually forced the other two out, it was not long before the Al Khalifa family appeared from nearby Qatar, to take control of the whole of the island at the end of the 18th century. The new rulers, whose dynasty continues to this day, sought protection against the Persians from the British Empire, which by that time had established its hegemony in much of the Middle East, and Manama entered a period of colonial influence. Colonial interest only increased when oil was discovered 30 km (19 mi) south of Manama in the centre of the island and first extracted in 1931. After World War II, Bahrain moved slowly towards independence and eventually in 1971 the British pulled out leaving Manama in charge of its own affairs. This was the beginning of a period that has seen it grow and flourish primarily due to the considerable wealth accumulated through oil production and processing.

Historically, Manama has been restricted to what is now known as the Manama Souq and the Manama Fort (now the Ministry of Interior) to its south. However the city has now grown to include a number of newer suburban developments as well as older neighboring villages that have been engulfed by the growth of the city. The neighborhoods of Manama today include:

Manama is the focal point of the Bahraini economy. While oil has decreased in importance in recent years due to depleting reserves and growth in other industries, petroleum is still the mainstay of the economy. Heavy industry (e.g. aluminium smelting, ship repair), banking and finance, and tourism are among the industries which have experienced recent growth. Several multinationals have facilities and offices in and around Manama.[4] The primary industry in Manama itself is financial services, with over two hundred financial institutions and banks based in the CBD and the Diplomatic Area. Manama is a financial hub for the Persian Gulf region and a center of Islamic banking. There is also a large retail sector in the shopping malls around Seef, while the center of Manama is dominated by small workshops and traders.

Manama is the main hub of the country's road network. At the moment the city's road network is undergoing substantial development to ameliorate the situation of traffic in the city. Due to the fact that it is the capital and the main city in the country, where most of the government and the commercial offices and facilities are established, along with the entertainment centers, and the countries fast growth, vehicle population is increasing rapidly.

The outline of the present road network was developed in the early 1930s, soon after the discovery of oil. The four main islands and all the towns and villages are linked by well-constructed roads. There were 3,164 km (1,966 mi) of roadways in 2002, of which 2,433 km (1,512 mi) were paved. A causeway stretching over 2.8 km (2 mi), connect Manama with Muharraq Island, and another bridge joins Sitra to the main island. A four-lane highway atop a 24 km (15 mi) causeway, linking Bahrain with the Saudi Arabian mainland via the island of Umm an-Nasan was completed in December, 1986, and financed by Saudi Arabia. In 2000, there were 172,684 passenger vehicles and 41,820 commercial vehicles.

Bahrain's port of Mina Sulman can accommodate 16 oceangoing vessels drawing up to 11 m (36 ft). In 2001, Bahrain had a merchant fleet of eight ships of 1,000 GRT or over, totaling 270,784 GRT. Private vehicles and taxis are the primary means of transportation in the city.

Manama has a comprehensive bus service which is far more economical than other modes of transport with fares around 150 to 200 Fils (around $.50(US); £.30) allows you to travel by bus. Some bus routes link to other towns such as Muharraq and Isa Town.

Bahrain International Airport is located on Muharraq Island, approximately 7 km (4 mi) from the CBD. It is a premier hub airport in the Middle East. Strategically located in the Northern Persian Gulf between the major markets of Saudi Arabia and Iran, the airport has one of the widest range and highest frequency of regional services with connections to major international destinations in Europe, Asia, Africa, and North America.

Manama has a wide range of universities, colleges and schools.

The city is located in the north-eastern corner of Bahrain on a small peninsula. As in the rest of Bahrain, the land is generally flat (or gently rolling) and arid.

Manama has an arid climate. In common with the rest of Bahrain, Manama experiences extreme climatic conditions, with summer temperatures up to 48 °C (118 °F), and winter as low as 15 °C (59 °F) with even hail at rare occasions. Average temperatures of the summer and winter seasons are generally from 17 °C (63 °F) to about 45 °C (113 °F). The most pleasant time in Bahrain is autumn when sunshine is comparatively low, coupled with warm temperatures tempered by soft breezes. 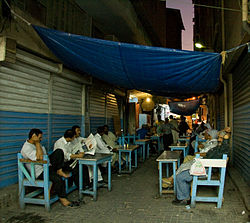 Men sitting at a street cafe in the Manama souq
Main article: Culture of Bahrain

The country attracts a large number of foreigners and foreign influences, with just under one third of the population hailing from abroad.[6] Alcohol is legal in the country, with bars and nightclubs operating in the city, however the government is proposing a ban for Muslims.[citation needed] Bahrain does recognise women's rights thanks to the queen of Bahrain, although it does not recognize[clarification needed] LGBT rights. Football is the most popular sport in Manama (and the rest of the country), with 3 teams from Manama participating in the Bahraini Premier League.