Tashkent (Uzbek: Toshkent, Тошкент; Russian: Ташкент, literally "Stone City"; English pronunciation: /ˌtæʃˈkɛnt/, Russian pronunciation: [tɐʂˈkʲent]) is the capital of Uzbekistan and of the Tashkent Province. The officially registered population of the city in 2008 was about 2.2 million.[1] Unofficial sources estimate the actual population may be as much as 4.45 million.[2]

Little is known about the origin of the city in pre-Islamic times.

In pre-Islamic and early Islamic times the town and the province were known as "Chach". The Shahnameh of Ferdowsi also refers to the city as Chach. Later the town came to be known as Chachkand/Chashkand, meaning "Chach City".[citation needed] (Tash in Turkic languages means stone. Kand, qand, kent, kad, kath, kud—all meaning a city—are derived from the Persian/Sogdian کنده kanda, meaning a town or a city. They are found in city names like Samarkand, Yarkand, Penjikent, Khujand etc.). After the 16th century, the name was steadily changed slightly from Chachkand/Chashkand to Tashkand, which, as "stone city", was more meaningful to the new inhabitants than the old name[citation needed]. The modern spelling of Tashkent reflects Russian orthography.

Tashkent started as an oasis on the Chirchik River, near the foothills of the West Tian Shan Mountains. In ancient times, this area contained Beitian, probably the summer "capital" of the Kangju confederacy.[3]

The principality of Chach, whose main town had a square citadel built around the 5th to 3rd centuries BC, some 8 kilometres (5.0 mi) south of the Syr Darya River. By the 7th century AD, Chach had over 30 towns and a network of over 50 canals, forming a trade center between the Sogdians and Turkic nomads. The region came under the sway of Islam in the early parts of the 8th century.

Under the Samanid dynasty, the city came to be known as Binkath. However, the Arabs retained the old name of Chach for the surrounding region, pronouncing it al-Shash instead. The modern Turkic name of Tashkent (City of Stone) comes from Kara-Khanid rule in the 10th century. 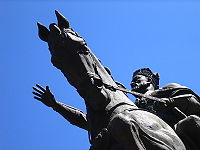 Statue of Amir Timur in Tashkent

The city was destroyed by Genghis Khan in 1219, although the great conqueror had found that the Khorezmshah had already sacked the city in 1214. Under the Timurids and subsequent Shaybanid dynasties the city revived, despite occasional attacks by the Uzbeks, Kazakhs, Persians, Mongols, Oirats and Kalmyks.

In 1809, Tashkent was annexed to the Khanate of Kokand. At the time, Tashkent had a population of around 100,000 and was considered the richest city in Central Asia. It prospered greatly through trade to Russia, but chafed under Kokand’s high taxes. The Tashkent clergy also favored the clergy of Bukhara over that of Kokand. However, before the Emir of Bukhara could capitalize on this discontent, the Russian army arrived.

In May, 1865, Mikhail Grigorevich Chernyayev (Cherniaev), acting against the direct orders of the tsar, and outnumbered at least 15-1 staged a daring night attack against a city with a wall 25 kilometres (16 mi) long with 11 gates and 30,000 defenders. While a small contingent staged a diversionary attack, the main force penetrated the walls, led by a Russian Orthodox priest armed only with a crucifix. Although defense was stiff, the Russians captured the city after two days of heavy fighting and the loss of only 25 dead as opposed to several thousand of the defenders (including Alimqul, the ruler of the Kokand Khanate). Chernyayev, dubbed the "Lion of Tashkent" by city elders, staged a "hearts-and-minds" campaign to win the population over. He abolished taxes for a year, rode unarmed through the streets and bazaars meeting common people, and appointed himself "Military Governor of Tashkent", recommending to Tsar Alexander II that the city be made an independent khanate under Russian protection.

The Tsar liberally rewarded Chernyayev and his men with medals and bonuses, but regarded the impulsive general as a "loose cannon", and soon replaced him with General Konstantin Petrovich von Kaufman. Far from being granted independence, Tashkent became the capital of the new territory of Russian Turkistan, with Kaufman as first Governor-General. A cantonment and Russian settlement were built across the Ankhor Canal from the old city, and Russian settlers and merchants poured in. Tashkent was a center of espionage in the Great Game rivalry between Russia and the United Kingdom over Central Asia. The Turkestan Military District was established as part of the military reforms of 1874. The Trans-Caspian Railway arrived in 1889, and the railway workers who built it settled in Tashkent as well, bringing with them the seeds of Bolshevik Revolution.

Impact of the Russian revolution

With the fall of the Russian Empire, the Russian Provisional Government removed all civil restrictions based on religion and nationality, contributing to local enthusiasm for the February Revolution. The Tashkent Soviet of Soldiers' and Workers' Deputies was soon set up, but primarily represented Russian residents, who made up about a fifth of the Tashkent population. Muslim leaders quickly set up the Tashkent Muslim Council (Tashkand Shura-yi-Islamiya) based in the old city. On 10 March 1917, there was a parade with Russian workers marching with red flags, Russian soldiers singing the La Marseillaise and thousands of local Central Asians. Following various speeches, Governor-General Aleksey Kuropatkin closed the vents with words "Long Live a great free Russia".[4] The First Turkestan Muslim Conference in Tashkent 16–20 April 1917. Like the Muslim Council this was dominated by the Jadid, Muslim reformers. However, a more conservative faction emerged in Tashkent centered around the Ulema. This faction proved more successful during the local elections of July 1917. They formed an alliance with Russian conservatives, while the Soviet became more radical. The Soviet attempt to seize power in September 1917 proved unsuccessful.[5]

The city began to industrialize in the 1920s and 1930s, but industry increased tremendously during World War II, with the relocation of factories from western Russia to preserve the Soviet industrial capacity from the invading Nazis. The Russian population increased dramatically as well, with evacuees from the war zones increasing the population to well over a million. The Russians and Ukrainians would eventually comprise more than half of the total residents of Tashkent.[6]

On 26 April 1966, Tashkent was destroyed by a huge earthquake (7.5 on the Richter scale) and over 300,000 were left homeless. Some 78,000 poorly engineered homes were destroyed[7] mainly in the densely packed areas of the old city where traditional adobe housing predominated.[8] The Soviet republics and some other countries such as Finland sent "battalions of fraternal peoples” and urban planners to help rebuild devastated Tashkent. They created a “model Soviet city” of wide shady streets, parks, immense plazas for military parades, fountains, monuments, and acres of apartment blocks. About 100,000 new homes were built by 1970,[7] many of which were filled with the families of the builders. Further development in the following years increased the size of the city with major new developments in the Chilonzar area, north-east and south-east of the city.[7] 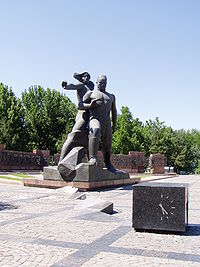 Memorial to victims of the 1966 earthquake

At the time of the collapse of the Soviet Union in 1991, Tashkent was the fourth largest city in the country and a center of learning in the science and engineering fields.

With the 1966 earthquake and the Soviet redevelopment afterward, very little is left of Tashkent's ancient history, including its significance as a trading point on the historic Silk Road.

At the moment, Tashkent is the most cosmopolitan city in Uzbekistan. The city is noted for its tree lined streets, numerous fountains, and pleasant parks. As capital of the nation, it has also been the target of several terrorist attacks since Uzbekistan gained independence, which the government has attributed to Islamic fundamentalists.

Since 1991, the city has changed economically, culturally, and architecturally. The largest statue ever erected for Lenin was replaced with a globe, complete with a geographic map of Uzbekistan over it. Buildings from the Soviet era have been replaced with new, modern buildings. One example is the "Downtown Tashkent" district which includes the 22-story NBU Bank building, the Intercontinental Hotel, the International Business Center, and the Plaza Building.

In 2007, Tashkent was named the cultural capital of the Islamic world as the city is home to numerous historic mosques and Islamic locations of interest.[9] Tashkent also houses the earliest written Qur'an which has been in Tashkent since 1924.[10] 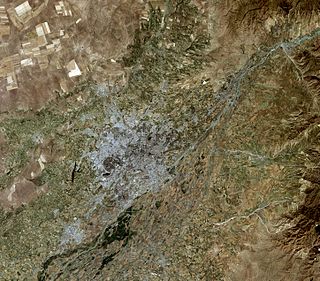 Tashkent 41°18′N 69°16′E﻿ / ﻿41.3°N 69.267°E﻿ / 41.3; 69.267 is situated in a well-watered plain to the west of the last Altai mountains[citation needed] on the road between Shymkent and Samarkand. Tashkent sits at the confluence of the Chirchik river and several of its tributaries and is built on deep alluvial deposits up to 15 metres (49 ft). The city is located in a lively tectonic area suffering large numbers of tremors and some earthquakes. One earthquake in 1966 measured 7.5 on the Richter scale. The local time in Tashkent is UTC/GMT +5 hours.

Tashkent has a Mediterranean climate (Köppen: Csa)[12] with long, hot and dry summers from May to September and short but cold winters from December to February. The climate has continental influences, and features two peaks of precipitation in the early winter and spring. The slightly unusual precipitation pattern is partially due to the 500 m (roughly 1600 feet) altitude that the city features. The temperatures in Tashkent can be extremely hot during July and August. Most precipitation occurs in the months of winter and spring, while the period between July and September is dry.[13][14]

A street in Tashkent

Tashkent is currently divided into the following districts (Uzbek tuman):

At the time of the Tsarist take over it had four districts (Uzbek daha):

In 1940 it had the following districts (Russian район): 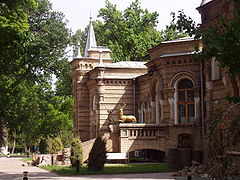 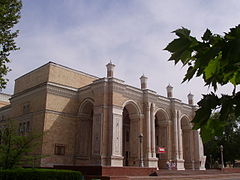 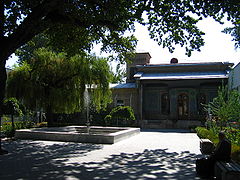 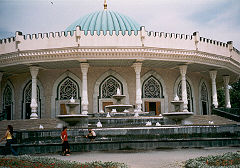 Due to the destruction of most of the ancient city during the 1917 revolution and, later, to the 1966 earthquake, little remains of Tashkent's traditional architectural heritage. Tashkent is, however, rich in museums and Soviet-era monuments. They include:

Russian Orthodox church in Amir Temur Square, built in 1898, was demolished in 2009, along with Soviet-time World War II memorial park and Defender of Motherland monument.[17][18][19]

Tashkent's most prominent football clubs are Pakhtakor Tashkent, and FC Bunyodkor, both of which compete in the Uzbek League.

Cyclist Djamolidine Abdoujaparov and footballer Vassilis Hatzipanagis were born in the city. Tennis player Denis Istomin was born and lives in the city.

Footballer Peter Odemwingie was born in Tashkent but plays for the Nigeria national football team.

Tashkent is twinned with: