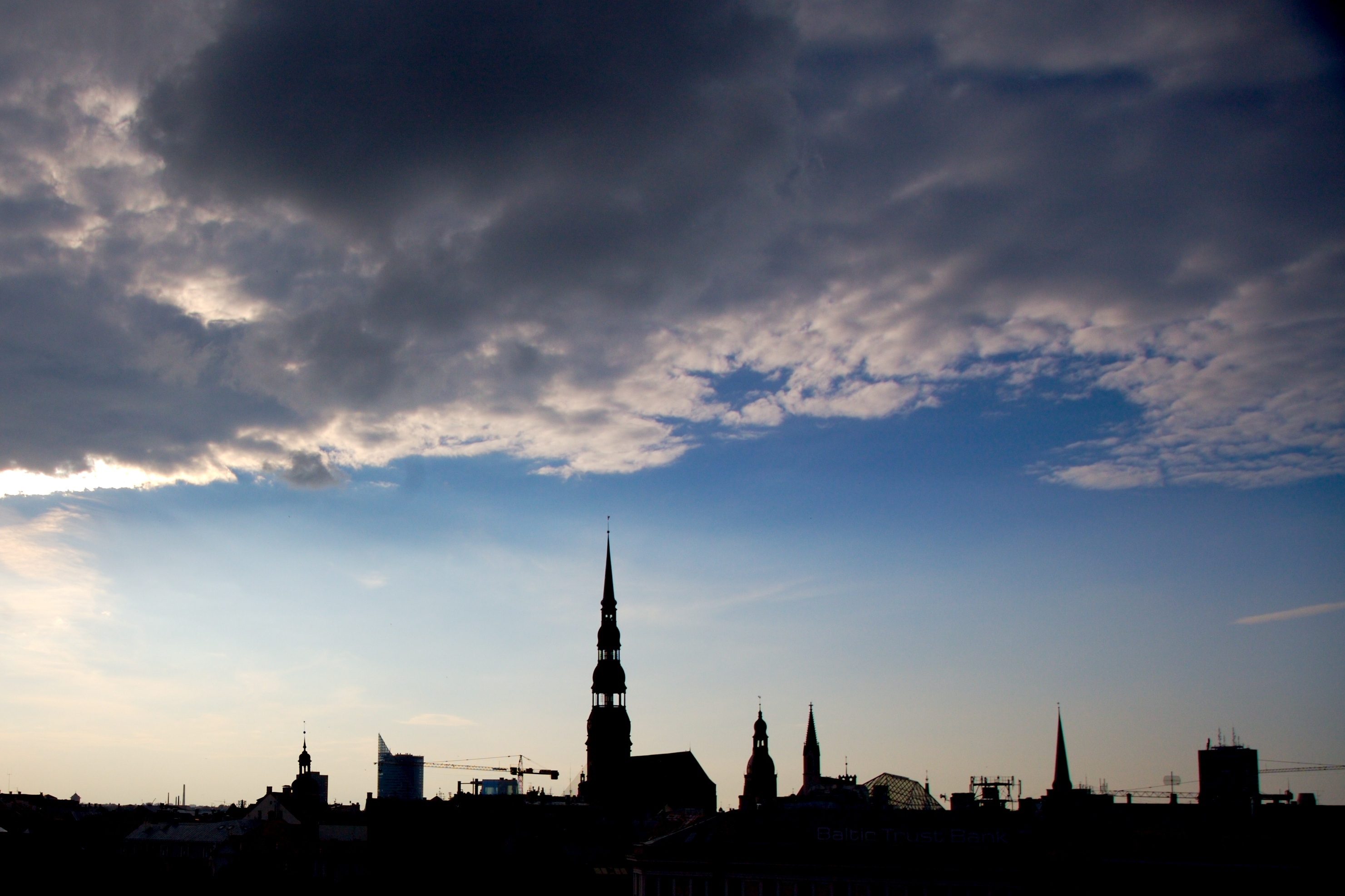 Riga ( _lv. Rīga, IPA2|riːga, audio|Rigapronunc.ogg|pronunciation) the of , is situated on the coast on the mouth of the river . Riga is the largest city in the Baltic states.The Historic Centre of Riga has been declared a , and the city is particularly notable for its extensive () architecture, which UNESCO considers to be unparalleled anywhere in the world [cite web|url=http://whc.unesco.org/archive/advisory_body_evaluation/852.pdf |title=World Heritage List - Riga (Latvia); No. 852 |publisher=unesco.org |format=pdf |pages=p. 3 (67)] .

Riga is located on the site of an ancient settlement of the Livonians, an ancient tribe, at the junction of the and the Riga River, at one point forming a natural harbor called the Riga Lake, neither of which exist today [cite web|url=http://www.ceroi.net/reports/riga/latviski/pamatlietas/teritorija.htm|title=Teritorija un administratīvās robežas vēsturiskā skatījumā |language=Latvian |accessdate=2007-08-02 |publisher=Cities Environmental Reports on the Internet] . It is believed that the name of the river gave Riga its name. [cite web|url=http://www.riga.lv/EN/Channels/About_Riga/History_of_Riga/Stories/Udeni/Ridzina.htm |title=Rīdziņa |language=Latvian |publisher=]

The modern founding of Riga is regarded by historians to have begun with the arrival of German traders, mercenaries and religious rs in the second half of the 12th century, attracted by a sparsely populated region, potential new markets and by the opportunities to convert the local population to . German merchants established an outpost for trading with the near the Liv settlement at Riga in 1158. The Augustinian monk Meinhard built a monastery there 1190.

Bishop Albert was proclaimed Bishop of by his uncle Hartwig, Archbishop of Bremen and Hamburg in 1199. He landed in Riga in 1201 with 23 ships and more than 1500 armed crusaders, making Riga his bishopric. He established the Order of (later a branch of the ) and granted Riga city rights in 1225. [cite web|url=http://www.riga.lv/EN/Channels/About_Riga/History_of_Riga/Chronology/VissenakieLaiki.htm |title=Chronicle of Major Events; The Earliest Age: Livonia |accessdate=2008-09-28 |publisher=]

Riga served as a gateway to trade with the Baltic tribes and with . In 1282 Riga became a member of the . The Hansa was instrumental in giving Riga economic and political stability, thus providing the city with a strong foundation which endured the political conflagrations that were to come, down to modern times.

As the influence of the Hansa waned, Riga became the object of foreign military, political, religious and economic aspirations. Riga accepted the Reformation in 1522, ending the power of the archbishops. In 1524, a venerated statue of the Virgin Mary in the Cathedral was denounced as a witch, and given a in the River. The statue floated, so it was denounced as a witch and burnt at Kubsberg

The 20th century brought and the impact of the to Riga. The German army marched into Riga in 1917. In 1918 the was signed giving the to Germany. Because of the Armistice with Germany of , , Germany had to renounce that treaty, as did Russia, leaving Latvia and the other Baltic States in a position to claim independence. Latvia, with Riga as its capital city, thus declared its independence on , . Between World War I and World War II (1918–1940), Riga and Latvia shifted their focus from Russia to the countries of . The and replaced Russia as Latvia's major trade partners.

During the , Latvia was occupied first by the in 1941 and then by Nazi Germany in 1941-1944. The were forcibly repatriated to Germany. The city's Jewish community was forced into a ghetto in the Maskavas neighbourhood, and concentration camps were constructed in Kaiserwald and the city of .

In 1945 Latvia was once again occupied by the Red Army. As a result of the war Latvia lost approximately one-third of its population.Fact|date=April 2008 Forced industrialization and plannedFact|date=April 2008 large-scale immigration of large numbers of non-Latvians from other Soviet republics into Riga, particularly Russians, changed the demographic composition of Riga.

The policy of economic reform, introduced in 1986 as , led to dissolution of the Soviet Union and restoration of independent Latvia in 1991. Latvia formally joined the as an independent country on , . In 2004 Latvia joined both and the .

In 2004, the arrival of low-cost airlines resulted in cheaper flights from other European cities such as London and Berlin and consequently a substantial increase in numbers of tourists. [cite news|url=http://news.bbc.co.uk/2/hi/programmes/crossing_continents/4633647.stm|publisher=BBC News|title=Latvia prepares for a tourist invasion|first=Jonathan|last=Charles|accessdate=2007-08-02|date=2005-06-30]


Image_caption = The old Town of Riga is one of many World Heritage Sites in Europe
State_Party = LAT
Type = Cultural
Criteria = i, ii
ID = 852
Region = Europe and North America
Year = 1997

* The Cathedral, the largest church in the . Built in the 13th century, it was modified several times in its history. It has a magnificent organ that dates from 1844.
* (Rīgas Pils), which houses the Museum of Latvian History and the Museum of Foreign Art.
* , with its convert|123|m|ft|0|abbr=on high tower.
* St. John's Church, a small 13th-century chapel, behind Saint Peter's Church.
* The Powder Tower ("Pulvertornis"), the only tower that remains from the original city walls. The Latvian Museum of War is located inside.
* Wooden architecture.
* Ethnographic Open-Air Museum ( [http://www.muzejs.lv "Brīvdabas Muzejs")] , houses, farm buildings, and church representing rural life going back hundreds of years. Situated along Jugla Lake ("Juglas Ezers").
* The Occupation Museum of Latvia, which documents the seizure and occupation of Latvia by different forces from 1940 to 1991.
* Art Nouveau architecture on Central Riga streets such as Alberta and Elizabetes Iela.
* - the third highest tower in Europe.
* Motor Museum ("Motormuzejs") - collection of retro motorcycles and automobiles, including some of the first motorcycles and remants of the Soviet era, for example, Brezhnev's and Stalin's armored limousines with waxworks of these political figures. Located in .
* and (Forest Park) with a Ferris wheel.
* Riga Circus - the only permanently situatated circus in the Baltic States.

The city of Riga consists of six administrative regions, four of which are named after regions of - district, suburb, suburb, suburb. There is also a Central District and a Northern district. Residents, however, divide Riga into residential neighbourhoods called "micro regions." Unlike the city centre, they are mostly residential although they are equipped with commercial sectors. These neighbourhoods include:

The climate of Riga is maritime and temperate, but the winters can be extreme due to the northern location. The coldest months are January and February, when the average temperature is -6°C but can frequently drop as low as -25°C. Due to the proximity of the sea autumn rains and fogs are frequent. Continuous snow cover may last eighty days. The summers in Riga are very warm and humid, with an average temperature of 18°C, the peak often goes as high as 36°C.

Business and leisure travel to Riga have increased significantly in recent years due to improved infrastructure. Most tourists travel to Riga by air via , the largest airport in the , which was renovated and modernized in 2001 on the occasion of Riga's 800th anniversary. In the near future, the face of Riga will undergo notable changes. The construction of a new landmark — the building — is beginning in the autumn of 2007 and is due to be built by 2010. [cite web|url=http://www.gaismaspils.lv/gp/index.php?l=en&m=attistiba&s=LNB_Ekas_Buvnieciba |title=Gaismas Pils; Development of the project |publisher=gaismaspils.lv |accessdate=2007-08-21] Currently discussions are underway in Riga council about the development of the central areas on the left bank of the Daugava. The major dispute surrounds plans to build skyscrapers in Ķīpsala.Fact|date=August 2007 The construction of 3 buildings in Ķīpsala has already started — the Da Vinci complex (25 floors) and two s called Z-Towers (30 floors). [cite web|url=http://www.emporis.com/en/wm/bu/?id=102008 |title=Da Vinci, Riga |accessdate=2007-08-21 |publisher=emporis.com] [cite web|url=http://www.vertikalapasaule.lv/eng/project/ |title=Z-Towers; On top of your business! |publisher=vertikalapasaule.lv |accessdate=2007-08-21] Almost all important Latvian financial institutions are located in Riga, including the , which is Latvia's central bank. Foreign commercial trade through Riga has been on the increase in recent years and received new impetus on , when Latvia became a member of the . Riga accounts for about half of the total industrial output of Latvia, focusing on the financial sector, public utilities, food and beverages, pharmaceuticals, wood processing, printing and publishing, textiles and furniture, and communications equipment manufacturing. More than 50% of Latvian companies are registered in Riga region. [cite web|url=http://www.lursoft.lv/stat/ur_stat_075.html |title=Lursoft statistika; Uzņēmumu dibināšanas dimanika Latvijas rajonos |accessdate=2007-09-25 |publisher=lursoft.lv |language=Latvian] The port of Riga is an important cargo shipping center. It is the main all-weather port in the Baltic and is expected to grow in the next few years due to increased trade with other ex-Soviet states and China.

Riga has one airport, , that serves commercial airlines. Air traffic at the airport doubled between 1993 and 2004. Baltic sea ferries connect Riga to , and . Riga was also home to two air bases during the : Rumbula and . Riga as a city-port is a major transportation hub and is the center of the local road and system. In 2008, the first stage of the new Southern Bridge route across the Daugava will be completed. [cite web|url=http://www.rdpad.lv/en/south_bridge/ |title=Explanatory Note on Planning and Building of the Southern Bridge Route |publisher=rdpad.lv |accessdate=2007-08-21] The Southern Bridge is currently the biggest construction project in Baltic States in 20 years, and will help to reduce traffic jams and the amount of traffic in the city centre. [cite web|url=http://www.dienvidutilts.lv/index.php?lang_id=2&menu_id=18 |title=Dienvidu Tilts; Project of the Bridge |accessdate=2007-08-21 |publisher=dienvidutilts.lv] Another big construction project is the planned Riga Northern Transport Corridor, [cite web|url=http://www.ziemelukoridors.lv/pages/main.php?l=en&tema=2 |title=Northern Corridor; About project |accessdate=2007-08-21 |publisher=ziemelukoridors.lv] which is scheduled to start in 2010.

Public transportation in the city is provided by which operates a large fleet of , and on an extensive network of routes across the city. In addition, many private owners operate services. Riga is connected to the rest of Latvia by trains operated by the national railway company , whose headquarters are in Riga. There are also international rail links to and (Valga).