For the operetta by Gilbert and Sullivan, see The Grand Duke. For the Grand Duke butterfly, see Bassarona iva.

The feminine form of grand duke is grand duchess.

The proper term of grand duke was a later invention, probably originating in Western Europe, to denote a particularly mighty duke, as the title duke has until the end of Middle Ages been deflated to belong to rulers of relatively small fiefs (such as a city state or a district), instead of the big provinces it once was attached to.

One of the first examples, occurred when Count Gonçalo I Mendes of Portucale (in northwest Portugal and considered as the country’s original nucleus) took, in 987, the personal title of Magnus Dux Portucalensium (Grand-Duke of Portucale) and rebelled against King Bermudo II of León. He was defeated by the royal armies but he obtained a remarkable autonomy as a Magnus Dux.

Another example was the semi-official use of grand duke meaning the later Dukes of Burgundy, i.e., in the 15th century, when they ruled a portion of eastern France as well as most of the Netherlands. Philip III, Duke of Burgundy (ruler 1419–67) assumed the subsidiary, legally void style and title Grand Duke of the West in 1435, having recently consolidated the duchies of Brabant and Limburg as well as the counties of Holland, Zeeland, Friesland, Hainaut and Namur under his possession. His son and successor Charles the Bold (ruler 1467–77) continued to use the same style.

The title magnus dux or grand duke (Didysis Kunigas, Didysis Kunigaikštis in Lithuanian) is said to have been used by the rulers of Lithuania, and after Jagiello also became kings of Poland. From 1573, both the Latin and the Polish equivalent wielki ksiaze, in chief of Lithuania as well as Russia, Prussia, Mazovia, Samogithia, Kiev, Volhynia, Podolia, Podlachia, Livonia, Smolensk, Severia and Chernigov (including hollow claims), were used as part of the respective versions of the full style officially used by the kings (title Krol) of Poland during the Polish-Lithuanian Commonwealth.

The first monarchs ever officially titled grand duke were the Medici sovereigns of Tuscany beginning from the late 16th century. This official title was granted by Pope Pius V in 1569, but the lands in question were under the vassalage of the Holy Roman Empire.

Napoleon used to award that title extensively: during his era, several of his allies were allowed to assume the title of grand duke, usually at the same time as their inherited fiefs were enlarged by additional lands obtained thanks to being his allies. His conquerors, for example the Congress of Vienna, consented to yet more uses of the title. Thus, the 19th century saw a new group of monarchs titled grand duke all around Central Europe. A list of such is available at grand duchy.

At the same century, the courtesy use of the title, translated grand duke, in Russia expanded because of the births of several male dynasts, instead of the earlier precarious situations when Russia barely had only one or two to succeed.[clarification needed]

The term can be said to originate in Germany, in a sense that a ruler in the then Germany's western borders was the first to be called so, and that it was a German overlord, the Holy Roman Emperor, whose vassal (although an Italian) was first granted the official title by the Pope.

The German and Dutch languages, which have separate words for royal prince (Prinz, Prins) and for sovereign prince (Fürst, Vorst), mark the Grand Princes of Lithuania, Ruthenian states and other Eastern European nations as higher princes, as well as the Russian rulers and later princes of the blood, by the terms Grossfürst, Grootvorst, not Grossherzog, Groothertog.

In 1582, king John III of Sweden added Grand Duke of Finland to the subsidiary titles of the Swedish kings, however without any factual consequences, Finland already being a part of the Swedish realm.

After the Russian conquests, it continued to be used by the Russian emperor in his role as ruler of Lithuania (1793–1918) and of autonomous Finland (1809–1917) as well. The Holy Roman Empire ruling house of Habsburg instituted a similar Grand Principality in Transylvania in 1765.

Grand princes or great princes were medieval monarchs who ruled usually several tribes and/or were overlords of other princes. At the time, they were usually treated and translated as kings. However, grand princes were not as elevated sovereign as later Western European kings, and thus they are treated lower than kings, particularly in later literature. Grand Princes ruled in Central and Eastern Europe, notably among Slavs and Lithuanians.

The title grand prince is Velikiy Knjaz (Великий князь) in Russian. The Slavic word knjaz and the Lithuanian kunigas (today translated as prince) are actually cognates of King. Thus, Veliki Knjaz and Didysis Kunigas was more like "high king" than "grand duke".

These countries developed in a way that the position of the head of the dynasty became more elevated. In such situations, those monarchs assumed a higher title, such as tsar or king. Grand Prince Ivan IV of Muscovy was the last monarch to rule without any higher title, until he assumed the style Tsar of Russia in 1547.

The rulers of the Turkish vassal state of Transylvania used the title of Grand Prince, this title was later assumed by the Habsburgs on their conquest of Hungary. The Polish kings of the Swedish Vasa dynasty also used the grand-princely title for their non-Polish territory.

The title grand prince (which in many of those lands already was in later medieval centuries awarded simultaneously to several rulers of the more expanded dynasty) continued, in modern times, as a courtesy title for all or several members of the Russian dynasty, such as the Grand Duke of Russia (veliki knjaz) in Russia's imperial era.

For more details on this topic, see Megas doux.

Under the latter, exclusively Byzantine theme system, the commander of a theme was often styled a dux. The title of "Grand Duke" (megas doux) was created by Alexios I Komnenos and was conferred upon the commanding admiral of the Byzantine navy. The title remained in use until the Empire's end, by which time the office had become a virtual chief minister, heading both civil and military administration. 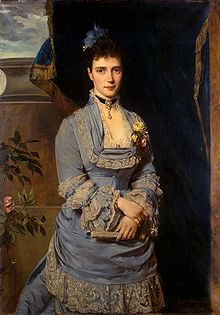 "Grand duke" is the traditional translation of the title Velikiy Kniaz, which from the 11th century was at first the title of the leading Prince of Kievan Rus', then of several princes of the Rus'. From 1328 the Velikii Kniaz of Muscovy appeared as the grand duke for "all of Russia" until Ivan IV of Russia in 1547 was crowned as Tsar. Thereafter the title was given to sons and grandsons (through male lines) of the Tsars and Emperors of Russia. The daughters and paternal granddaughters of Russian emperors, as well as the consorts of Russian grand dukes, were generally called "grand duchesses" in English.

Another translation of the Russian title would be grand prince. While this term is a more precise translation, it is neither standard nor widely used in English. In German, however, a Russian grand duke was known as a Großfürst, and in Latin as Magnus Princeps.

From 1809 to 1917 the Emperor of Russia was also the Grand Duke of Finland, which he held as an autonomous state. Before the Russian conquest Finland had been held by the Swedish kings, first as a royal duchy, since 1581 with the King assuming the secondary title Grand Prince of Finland (Finnish: Suomen suuriruhtinas, Swedish: Storfurste av Finland), also often translated as Grand Duke of Finland.

Styles and forms of address

Most often, a reigning grand duke, and in some families also a hereditary grand duke, were styled as "Royal Highness". Other more junior members of the families generally bore the lower style of "Grand Ducal Highness". For instance, prior to her marriage, Empress Alexandra of Russia was known as "Her Grand Ducal Highness Princess Alix of Hesse and by Rhine" Ihre Großherzogliche Hoheit Alix Prinzessin von Hessen und bei Rhein).

The Grand Ducal Family of Luxembourg however, styles all its members as "Royal Highness" since 1919; this is due to the fact that they are cadet members of the Royal and Ducal House of Bourbon-Parma, as male-line descendants of Prince Felix of Bourbon-Parma.

Historically, grand dukes and grand duchesses from Russia were styled as "Imperial Highness", as being member of the Russian Imperial Family.