The Duchy of Brabant was a historical region in the Low Countries. Its territory consisted essentially of the three modern-day Belgian provinces of Flemish Brabant, Walloon Brabant and Antwerp, the Brussels-Capital Region and most of the present-day Dutch province of North Brabant.

The Flag of Belgium is based on the colors of Brabant's coat of arms: black, yellow, and red.

In Roman times, the territory was situated in the Roman provinces of Belgica and Germania Inferior and inhabited by the Belgae, who were of both Celtic and Germanic origin. At the end of the Roman period they were conquered by the Germanic Franks.

The region's name is first recorded as the Carolingian shire pagus Bracbatensis, located between the rivers Scheldt and Dijle, from bracha "new" and bant "region".[citation needed]

It formed the heart of the Low Countries until it was dismembered after the Dutch revolt. Its most important cities were Brussels, Antwerp, Leuven, Breda, 's-Hertogenbosch, Lier and Mechelen.

The Landgraviate of Brabant was established as a feudal imperial fief within Lower Lotharingia. As such, it was an integral part of the Holy Roman Empire. After the death of the preceding count of Brabant, Count Palatine Herman II of Lotharingia in 1085, the imperial fief was assigned to count Henry III of Leuven.

The Duchy of Brabant was formally established in 1183-1184 and the hereditary title of Duke of Brabant was created by Emperor Frederick I Barbarossa in favour of Henry I of Brabant, son of Godfrey III of Leuven. Although the original county was quite small and limited to the territory between the rivers Dender and Zenne, situated to the west of Brussels, from the 13th century on its name was applied to the entire territory under control of the dukes.

In 1190, after the death of Godfrey III, Henry I also became Duke of Lower Lotharingia. By that time the title had lost most of its territorial authority. According to protocol, all his successors were thereafter called Dukes of Brabant and Lower Lotharingia (often called Duke of Lothier).

After the Battle of Worringen in 1288, the dukes of Brabant also acquired the Duchy of Limburg and the lands of Overmaas (trans-Meuse). In 1354 the Joyous Entry, or charter of liberty was granted to the citizens of Brabant by John III. 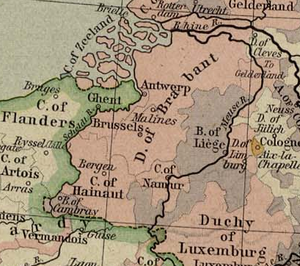 Historical map of the duchy of Brabant and of the Prince-Bishopric of Liège (1477).

In 1430 the Duchies of Lower Lotharingia, Brabant and Limburg were inherited by Philip the Good of Burgundy and became part of the Burgundian Netherlands.

In 1477 the title fell to the House of Habsburg by dowry of Mary of Burgundy. At that time the Duchy of Brabant extended from Luttre, south of Nivelles to 's Hertogenbosch, with Leuven as the capital city. The subsequent history of Brabant is part of the history of the Habsburg Seventeen Provinces.

The Eighty Years' War (1568–1648) brought the northern parts (essentially the present Dutch province of North Brabant) under military control of the northern insurgents. After the Treaty of Westphalia in 1648, the United Provinces' independence was confirmed and northern Brabant was formally ceded to the United Provinces as Staats-Brabant, a federally governed territory.

The southern part remained in Spanish Habsburg hands as a part of the Southern Netherlands. It was transferred to the Austrian branch of the Habsburgs in 1714. During the French occupation of the Southern Netherlands in 1795 the duchy of Brabant was dissolved. The territory was reorganised in the départements of Deux-Nèthes (present province of Antwerp) and Dyle (the later province of Brabant).

Map of the Duchy of Brabant; territory covering approximately the present Dutch province of North Brabant, the three Belgian provinces Antwerp, Walloon Brabant and Flemish Brabant, and the Brussels-Capital Region.

The Duchy of Brabant was historically divided in four parts each with their own capital. The four capitals are Leuven, Brussels, Antwerp and 's Hertogenbosch. Before 's Hertogenbosch was founded Tienen formed the fourth capital.

The unwalled cities did not have the right to construct walls. Trade was allowed in these areas and usually this right resulted in a larger population and the development of major villages and later cities. The unwalled cities had also the right to hold markets which they held on large market squares. This distinguishes them from surrounding villages who were not allowed to hold markets and did not possess market squares. Being unwalled also meant that some of these places suffered heavily in war and during the Dutch Revolt.

Note: the city of Mechelen formed an independent state along with the Land of Heist-op-den-Berg and Gestel. Willemstad, Geertruidenberg and Klundert were part of the County of Holland; whose name in turn was later used to describe or label large areas of the Netherlands.