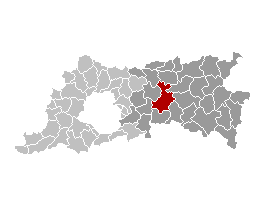 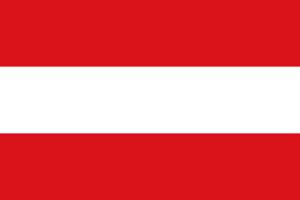 Leuven audio|Nl_be-Leuven.ogg|listen (French: "Louvain", often used in English, German: "Löwen") is the capital of the province of in the Flemish Region, . It is located about 30 kilometers east of , with as other neighbouring cities , , , and .

The comprises the historical of Leuven and the former municipalities of , , a part of , and .

The first mention of Leuven goes back to 891 ('Loven'), when a Viking army was defeated by the Frankish king (see: ). According to the city legend, its red-white-red colours depict the blood-stained shores of the river after this battle.

Situated at this river and nearby the stronghold of the Dukes of Brabant, Leuven became the most important centre of trade in the between the 11th and the 14th century. A token of its former importance as a centre of cloth manufacture, is nicely reflected in the typical Leuven linen cloth, known in late 14-15th century texts as "lewyn" (other spellings: "Leuwyn", "Levyne", "Lewan(e)", "Lovanium", "Louvain") [ [http://www.library.ucla.edu/yrl/reference/maps/blaeu/germania-inferior-nt.htm#prima_brabantiae Blaeu Atlas (UCLA Library - YRL Reference and Instructional Services) ] ] .

In the 15th century a new golden era began with the founding of the largest and oldest university in the , the , in 1425.

In the 18th century Leuven became even more important because of a flourishing that would later become (recently renamed to ), the largest brewery company in the world. In fact, InBev's brewery and main offices dominate the entire north-eastern part of the town, between the and the to .

In the 20th century, both world wars inflicted major damage to the city. Upon German entry in WW1, the town was heavily damaged due to German "" policy. The Germans shot the burgomaster, university rector and all the city's police officers ["Fighting the Great War" by Michael S. Neiberg page 15 Harvard University Press, 2005] The university library was deliberately destroyed by the German army on , using petrol and incendiary pastilles. Hundreds of thousands of irreplaceable volumes and Gothic and Renaissance manuscripts were lost. [cite book |title= Dynamic Of Destruction, Culture and mass killing in the first world war |last= Kramer|first= Alan |authorlink= |coauthors= |year=2008 |publisher=Penguin |location= |isbn= 9781846140136 |pages= ] [cite journal |last= Gibson |first= Craig |authorlink= |coauthors= |year=2008 |month= |title= The culture of destruction in the First World War |journal=Times Literary Supplement |volume= |issue= January 30, 2008 |pages= |id= |url= http://entertainment.timesonline.co.uk/tol/arts_and_entertainment/the_tls/article3277792.ece |accessdate= 2008-02-18 |quote= ] The world was outraged over this and the library was completely rebuilt after with American charity funds and German war indemnities. After World War II, the burnt down building had to be restored again. It still stands as a symbol of the wars and of Allied solidarity.

* The Town Hall, built by , , and, after both of them died, between 1439 and 1463 in a Brabantian late-Gothic style. The reception hall dates from 1750.
* The St. Peter's Church (1425–1500) was finished by and . During the Second World War the church was damaged; during the restoration a Romanesque from the 11th century was found. In the church itself there are several paintings from the 17th and 18th centuries (amongst others famous painting of ) and the grave of Henry I of Brabant. The 50 meter high tower—which was meant to be 169 meters but was never completed—is home to a . The tower was included in 's list of "" in 1999.
* Saint-Anthony's Chapel, Pater Damiaanplein, from the 17th to the 20th centuries, contains the tomb of , the "leper priest" of , by . The Catholic 's remains were returned in Belgium with great fanfare in 1936 after having been originally buried on the an Island of where he had served the outcast lepers and died.
* The Linen-hall in an early-Gothic style, with baroque addition, is today the University Hall.
* The Church of Saint Michael was built in the typical Style.
* The Church of Saint Quinten incorporates remains of a Romanesque church built in the 13th century.
* The University Library on the was built by the American . It was a gift from the American people to Leuven after during which the Germans burned down the original library, causing much outroar in the USA. The tower houses one of the largest carillons in the world.
* There is a ducal castle dating from the 12th century on the Keizersberg ("Emperor's Mountain") which was demolished in the 17th Century. Today there is a neo-romanesque Abbey where the castle once stood.
* The Large Beguinage is one of the world's best remaining examples of its architectural type. It was recognized by as a in 1998.
* There are several other smaller churches and chapels around town.
* "Fonske" is a statue near the centre of town . Its full name is "Fons Sapientiae", Latin for "fountain of wisdom." The statue represents a university student who, while reading a book, lets wisdom flow into his head as liquid from a glass. Just like in , Fonske is from time to time dressed in costumes appropriate for the occasion.

Given the presence of the KULeuven, an important European institution for academic research and education, much of the local economy is concentrated on spin-offs from academic research. There are several biotech and ICT companies; , the academic hospital and research center and a large number of private service providers in the medical and legal field.

Being the capital of the region of Flemish-Brabant means that there are many governmental institutions located in Leuven as well as the regional headquarters of transport corporations such as .As the largest and one of the oldest cities in the immediate Flemish vicinity Leuven, with a large palate of cafés, restaurants, cultural institutions and shopping neighouborhoods, the city also attracts people from nearby cities and villages.

Leuven is also the worldwide headquarters of , an international beer giant.

Nowadays Leuven is a real "student city", as during the academic year most citizens in its centre are students.

Leuven sports one of the liveliest bar scenes in Belgium. Besides boasting the "longest bar" in Belgium, the Old Market, tens of bars and cafés crammed into a central square in Leuven, it's also the proud home city of Belgium's smallest bar, Onder den Toog in the Noormannenstraat.

The (; the Catholic University Leuven) is the oldest Catholic university still in existence in the World and the biggest university in Belgium.

One of the orchestras formed by students is the "Arenbergorkest", allowing these young people to combine study and music. There is also a number of "" (Vocational university, literally translated: "high schools") such as the (; the Catholic "High School" Leuven), as well as a university college: (Group T).

The of Leuven is currently , a socialist politician prominent on the national level, formerly minister of internal affairs and leader of the socialist faction in the lower chamber of the parliament, among other positions held.

Leuven is well known for its summer rock festival . The main of the municipality is , the successor of .Leuven also has some orchestras, like the famous Arenberg Orchestra.