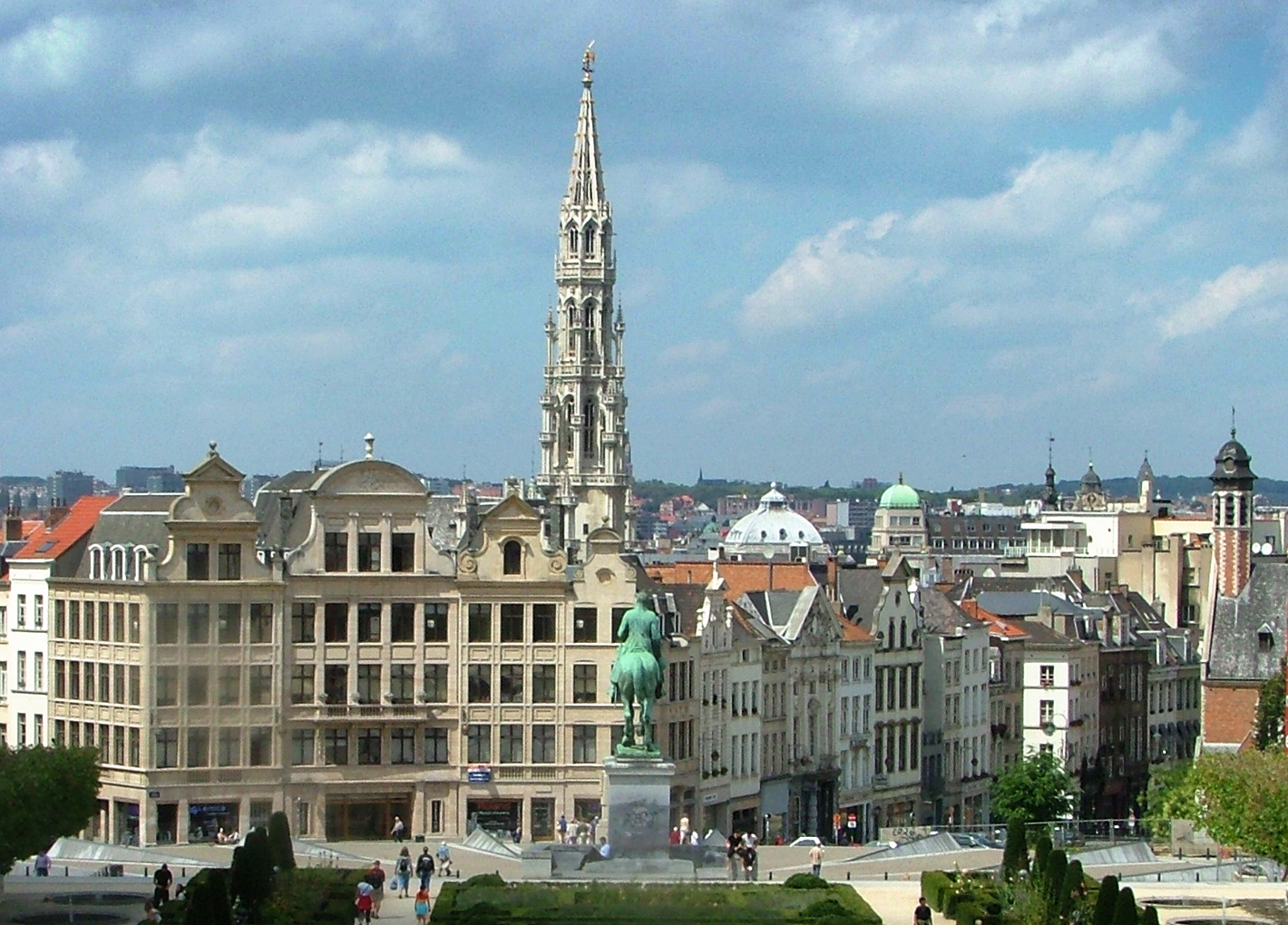 imagesize = 250px
image_caption = View of the old city centre from 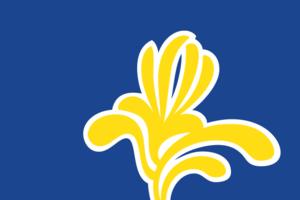 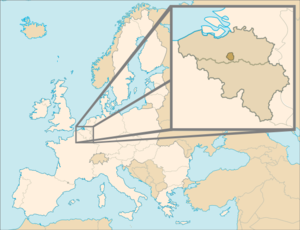 Brussels has grown from a 10th-century fortress town founded by 's grandson into a metropolis of more than one million inhabitants.

Although historically Dutch-speaking, Brussels has become increasingly francophone. Today most inhabitants are native French-speakers, although both languages have official status. [ [http://news.bbc.co.uk/2/hi/europe/7507506.stm BBC NEWS | Europe | Analysis: Where now for Belgium?] ] This process has led to a longstanding conflict between the French and Dutch speaking community, reflecting the situation in Belgium at large. Brussels is the capital of and of the .

The name Brussels derives from the "Bruocsella", which means marsh ("bruoc") and home ("sella") or "home in the marsh".Fact|date=September 2008

The origin of the settlement that was to become Brussels lies in ' construction of a chapel on an island in the river around 580. [ [http://www.city-data.com/world-cities/Brussels-History.html Brussels History ] ]

The official founding of Brussels is usually situated around 979, because Duke Charles transferred the relics of Saint Gudula from to the Saint Gaugericus chapel in Brussels, located on what would be called . The Otto II gave the duchy of to Charles, the banished son of King in 977, who would construct the first permanent fortification in the city, doing so on that same island.

The county of Brussels was attributed to , count of Leuven around 1000. In 1047, his son founded the Saint Gudula chapter.

Because of its location on the shores of the on an important trade route between and , and , Brussels grew quite quickly; it became a commercial centre that rapidly extended towards the upper town (, , Zavel area...), where there was a smaller risk of floods. As it grew to a population of around 30,000, the surrounding marshes were drained to allow for further expansion. The Counts of Leuven became Dukes of Brabant at about this time (1183/1184). In the 11th century, the city got its first walls. [nl [http://www.bop.vgc.be/didmat/ogenblikken/achtergrond/ontstaan.html Zo ontstond Brussel] Vlaamse Gemeenschapscommissie - Commission of the Flemish Community in Brussels]

After the construction of the in the early 13th century, Brussels grew significantly. In order to let the city expand, a second set of walls was erected between 1356 and 1383. Today, traces of it can still be seen, mostly because the "", a series of roadways in downtown Brussels bounding the historic city centre, follows its former course.

In the 15th century, by means of the wedding of heiress with Philip the Bold, Duke of Burgundy, a new Duke of Brabant emerged from the House of Valois (namely Antoine, their son), with another line of descent from the Habsburgs (Maximilian of Austria, later , married , who was born in Brussels).

Brabant had lost its independence, but Brussels became the Princely Capital of the prosperous , and flourished.

Charles V, heir of the Low Countries since 1506, though (as he was only 6 years old) governed by his aunt Margaret of Austria until 1515, was declared King of , in 1516, in the Cathedral of Saint Gudule in Brussels.

Upon the death of his grandfather, in 1519, Charles V became the new archduke of the Austrian Empire and thus the of the Empire "on which the sun does not set". It was in the Palace complex at Coudenberg that Charles V abdicated in 1555. This impressive palace, famous all over Europe, had greatly expanded since it had first become the seat of the Dukes of Brabant, but it was destroyed by fire in 1731. All that remains is an archaeological site.

In 1695, French troops sent by King bombarded Brussels with artillery. Together with the resulting fire, it was most destructive event in the entire history of Brussels. The was destroyed, along with 4000 buildings, a third of those in the city. The reconstruction of the city centre, effected during subsequent years, profoundly changed the appearance of the city and left numerous traces still visible today.

In 1830, the took place in Brussels after a performance of Auber's opera "" at De Munt or theatre. On July 21, 1831, Leopold I, the first King of the Belgians, ascended the throne, undertaking the destruction of the city walls and the construction of many buildings. Following independence, the city underwent many more changes. The Senne had become a serious , and from 1867 to 1871 its entire was completely covered over. This allowed and the construction of modern buildings and boulevards which are characteristic of downtown Brussels today.

The city has hosted various fairs and conferences, including the fifth in 1927 and two world fairs: the and the .

Beginning on May 10, 1940, Brussels was bombed by the German army; however, most of the war damage to the city took place in 1944&ndash;1945. The was built, completed in 1952. The first was finished in 1969, and the first line of the was opened in 1976. The took place in Brussels on May 29, 1985. The Brussels Capital Region was founded on June 18, 1989 after a constitutional reform in 1970. [Belgian Constitution, Article 3: "Belgium is made up of three regions: The Flemish region, the Walloon region and the Brussels region."] [ [http://portail.irisnet.be/en/region/region_de_bruxelles-capitale/creation.shtml Brussels Capital-region / Creation] ]

Brussels' proximity to coastal areas influences the area's climate by sending marine air masses from the . Nearby wetlands also ensure a maritime temperate climate. On average (based on measurements the last 100 years), there are approximately 200 days of rain per year in the Brussels Capital-Region. [ [http://www.meteo.be/meteo/view/fr/360361-Parametres.html#ppt_757427 Site de l'institut météorologique belge] ]

The Brussels Capital-Region is one of the three regions of , while the and the do exercise, each for their part, their cultural competencies on the territory of the region. French and Dutch are the official languages; most public services are bilingual (exceptions being education and a couple of others). The Capital Region is predominantly French-speaking - about 85-90% [fr icon [http://www.lexilogos.com/bruxelles_plan.htm Personal website "Lexilogos" located in the , on European Languages (English, French, German, Dutch, and so on) - French-speakers in Brussels are estimated at about 90% (estimation, not an 'official' number because there are no linguistic census in Belgium)] ] [fr icon [http://www.initiatives.refer.org/_notes/sess604.htm#_ftnref9 "Langues majoritaires, langues minoritaires, dialectes et NTIC" by Simon Petermann, Professor at the University of Liège, Wallonia, Belgium] ]

Because of how the federalisation was handled in Belgium, but also because of the fact that the municipalities in the region did not take part in the merger that affected municipalities in the rest of Belgium in the seventies, the public institutions in Brussels offer a bewildering complexity. The complexity is more apparent in the lawbooks than in the facts, since the members of the Brussels Parliament and Government also act in other capacities, e.g. as members of the council of the Brussels agglomeration or the community commissions.One distinguishes:

* The agglomeration, with a council and a board, with the same membership as the organs of the Brussels Region. This is a decentralised administrative public body, assuming competences which elsewhere in Belgium are exercised by municipalities or provinces (fire brigade, waste disposal). The by-laws enacted by it do not have the status of a legislative act.

* A bi-communitarian public authority, (Dutch: "Gemeenschappelijke Gemeenschapscommissie, GGC", French: "Commission communautaire commune, COCOM"), with a United Assembly (i.e. the members of the regional parliament) and a United Board (the ministers - not the secretaries of state - of the region, with the minister-president not having the right to vote). This Commission has two capacities: it is a decentralised administrative public body, responsible for implementing cultural policies of common interest. It can give subsidies and enact by-laws. In another capacity it can also enact ordinances, which have equal status as a national legislative act, in the field of the welfare competencies of the communities: in the Brussels Capital-Region, both the French Community and the Flemish Community can exercise competencies in the field of welfare, but only in regard to institutions that are unilingual (e.g. a private French-speaking retirement home or the Dutch-speaking hospital of the ). The Common Community Commission is competent for policies aiming directly at private persons or at bilingual institutions (e.g. the centra for social welfare of the 19 municipalities). Its ordinances have to be enacted with a majority in both linguistic groups. Failing such a majority, a new vote can be held, where a majority of at least one third in each linguistic group is sufficient.

* The Brussels Region is not a province, nor does it belong to one. Within the Region, 99% of the provincial competencies are assumed by the Brussels regional institutions. Remaining is only the and some aides.

Due to the multiple capacities of single members of parliament, there are parliamentarians who are at the same member of the Brussels Parliament, member of the Assembly of the Common Community Commission, member of the Assembly of the French Community Commission, member of the Parliament of the French Community of Belgium and "community senator" in the . At the moment, this is the case for Mr. François Roelants du Vivier (for the ), Mrs. Amina Derbaki Sbaï (since June 2004 for the Parti Socialiste, but beforehand, since 2003, for the Mouvement Réformateur) and Mrs Sfia Bouarfa (since 2001 for the Parti Socialiste).