Leopold I of Belgium

Leopold I of Belgium 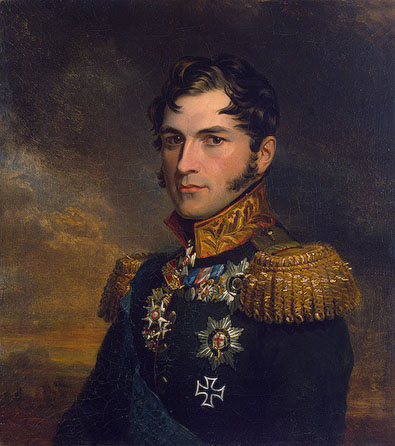 He was born in and died in .

He was the youngest son of and Countess , and later became a prince of after the territorial swap by his father of Ehrenburg Castle in the n town of Coburg. He was also an uncle of Queen Victoria of the .

In 1795, as a mere child, Leopold was appointed of the Izmaylovsky Imperial Regiment in . Seven years later he became a . When Napoleonic troops occupied the Duchy of Saxe-Coburg in 1806 Leopold went to . Napoléon offered him the position of adjutant, but he refused. Instead he took up a military career in the Imperial Russian cavalry. He campaigned against Napoléon, and distinguished himself at the at the head of his division. In 1815, Leopold reached the rank of in the .

In on , , he married , the only legitimate child of the British Prince Regent (later King ) and therefore heiress to the British throne, and was created a British field-marshal and Knight of the Garter. On , , Princess Charlotte was delivered of a stillborn son; she herself died the following day. Had she lived, she would have become Queen of the United Kingdom on the death of her father, and Leopold presumably would have assumed the role later taken by his nephew, Prince Albert, as Prince Consort of Great Britain, and never chosen King of the Belgians. Despite Charlotte's death, the Prince Regent granted Prince Leopold the British style of "Royal Highness" by on [ [http://www.heraldica.org/topics/britain/prince_highness_docs.htm#1816 Royal Styles and Titles – 1818 Order-in-Council] ] . In honor of his first wife, Leopold and , his second wife, named their first daughter Charlotte, who would later become Empress Carlota of Mexico.

On , , Leopold participated in nuptials of doubtful validity (a private marriage-contract with no religious or public ceremony) with the actress , created "Countess of Montgomery", a cousin of his advisor, . The 'marriage' reportedly ended in 1831 and the following year he married Louise-Marie at the , in , , on , .

King of the Belgians

After asserted its independence from the on , the , considered several candidates and eventually asked Leopold to become king of the newly formed country. He was elected on and accepted and became "King of the Belgians" on , . He swore allegiance to the constitution in front of the Saint Jacob's Church at Coudenbergh Place in on . This day became the Belgian national holiday. would become his personal secretary. Less than two weeks later, on , the invaded . Skirmishes continued for eight years, but in 1839 the two countries signed the Treaty of London establishing 's independence. With the opening of the railway line between and on , , one of King Leopold's fondest hopes&mdash;to build the first railway in continental Europe&mdash;became a reality.

Infobox Monarch styles
royal name=King Leopold I of the Belgians


dipstyle=His Majesty
offstyle=Your Majesty
altstyle=Sire| In 1840, Leopold arranged the marriage of his niece, Queen Victoria, the daughter of his sister, , to his nephew, Prince , son of his brother, . Even before she succeeded to the throne, Leopold had been advising the then-Princess Victoria by letter, and after her accession, he was one of the great influences on her in the early days of her monarchy.

In 1842, Leopold tried unsuccessfully to pass laws to regulate female and . A wave of revolutions passed over after the deposition of King Louis-Philippe from the French throne in 1848. remained neutral, mainly because of Leopold's diplomatic efforts.

On , , Leopold again lost a young wife, as Queen Louise-Marie died of tuberculosis at age 38. At 11:45 am on , the king died in . He lies buried in the Royal vault at the Church of Our Lady, Laken Cemetery, , .

Descent before Conrad the Great is taken from [http://fabpedigree.com/s056/f354285.htm] and may be inaccurate.

*
* Leopold I of Belgium has left such a legacy behind that he was selected as a motive for a very recent commemorative coin: the 12.50 euro 175th Anniversary of the Belgian Dynasty Coin. The obverse shows his portrait facing left.
*
* (1793-1862), personal doctor.