The only daughter of Leopold I, King of the Belgians (1790–1865) by his second wife, Louise-Marie, Princess of France (1812–1850), Charlotte was born at the Royal Castle of Laeken in Laeken, Brussels, Belgium. Charlotte had three brothers: Louis-Philippe, who died in infancy, Leopold, who on the death of their father became Leopold II of Belgium and Philippe, Count of Flanders. She was also a first cousin to both Queen Victoria of the United Kingdom and her husband, Prince Albert, as well as Ferdinand II of Portugal. She belonged to the House of Saxe-Coburg and Gotha.

Her favorite grandparent Maria Amalia of the Two Sicilies, Queen of France, was the consort of Louis-Philippe of France, and a niece of Marie Antoinette. Maria Amalia was Charlotte's close confidante, and on her wedding day in 1857, she wore a bracelet with a miniature portrait of her. They regularly corresponded, especially later while Charlotte was in Mexico.

When Charlotte was ten years old, her mother, Louise-Marie, died of tuberculosis and Charlotte was entrusted to the Countess of Hulste, a close family friend. Although young, the princess had her own household; but for a few weeks out of the year, Charlotte stayed in Claremont with Maria Amalia and the rest of her mother's family in exile. 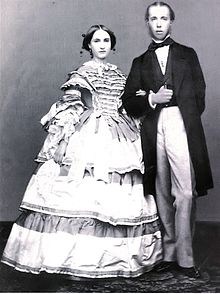 On 27 July 1857 in Brussels, Charlotte married her second cousin Archduke Maximilian of Austria, the idealistic younger brother of Emperor Franz Josef of Austria. In the Court of Vienna she was much prized by her mother-in-law, who saw in her the perfect example of a wife to an Austrian Archduke. Charlotte disliked Empress Elizabeth (also known as Sissi, Franz Josef's wife). It is said that the archduchess disliked the deep connection that existed between the empress and Maximilian, who were confidantes and shared the same tastes for many things, especially because her sister-in-law was universally admired for her beauty and charms.

Charlotte spent several relatively happy years in Italy as Maximilian's wife while the archduke served as governor of the provinces of Lombardy and Venetia. Although Lombardy and Venetia were then under the rule of the Austrian Empire, neither Maximilian nor Charlotte held real power, and both were fatally eager for more challenging roles in life. 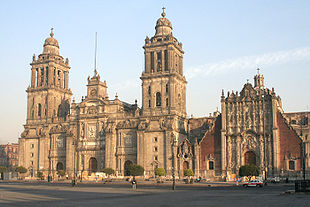 Maximilian and Carlota were crowned in 1864 at the Catedral Metropolitana in Mexico City.

In the early 1860s, the ambitious Napoleon III initiated the French intervention in Mexico. France, eager to turn Mexico into a satellite state, searched for a suitable figurehead to serve as the nominal emperor of Mexico. Maximilian accepted the Mexican crown and the couple sailed for the New World. The imperial couple were crowned at the Catedral Metropolitana in 1864 and chose as their seat Mexico City, making their home in the Neoclassical Castillo de Chapultepec. As Empress, Charlotte took the name of Carlota (Spanish for Charlotte). Carlota tried to take her imperial duties seriously, and even undertook a tour of the remote Yucatán frontier, visiting the ruins of Uxmal.

Only months after the coronation, however, Napoleon III began signaling his abandonment of Maximilian, and the French began to withdraw their troops from Mexico. This strategic pullback was a potentially fatal blow to the infant Mexican monarchy. The situation was exacerbated by a United States blockade that prevented French reinforcements from landing. In a desperate attempt to save her husband's throne, Charlotte returned to Europe, seeking assistance for her husband in Paris, Vienna, and finally in Rome from Pope Pius IX. Her efforts failed; she manifested symptoms of paranoia, suffered a profound cognitive and emotional collapse, and never returned to Mexico.

Charlotte and Maximilian had no children, but in 1865 the imperial couple adopted Agustín de Iturbide y Green and Salvador de Iturbide y de Marzán – grandsons of Agustín de Iturbide y Arámburu, an earlier emperor of Mexico (r. 1822-23). They gave two-year-old Agustín the title of "His Highness, The Prince of Iturbide" —similar imperial titles were accorded to various members of the child's extended family—and intended to groom him as heir to the throne. The explosive events of 1867, however, dashed such hopes, and after he grew to adulthood, Agustín renounced all rights to the Mexican throne, served in the Mexican army, and eventually established himself as a professor at Georgetown University.

Rumors persist that, in 1866, Charlotte was having an affair with Belgian officer Colonel Alfred van der Smissen and that she gave birth to a son, Maxime Weygand, in Brussels on 21 January 1867. Weygand refused to confirm or deny the persistent rumor and his parentage remains uncertain. Weygand was a French military commander in both World War I and II.1

President Benito Juárez of the Republic of Mexico oversaw the execution of Maximilian in 1867. (His last words were reportedly of his absent wife: "Poor Carlota!"[1]). The empire had collapsed after only three years. Carlota's mental state continued to be poor. Her brother Prince Philippe, Count of Flanders, had her examined by alienists (psychiatrists), who pronounced her insane. She spent the rest of her life in seclusion, first at Miramar Castle near Trieste, Italy, and then at the Castle of Bouchout in Meise, Belgium. During World War I, her Belgian estate was surrounded by the occupying German army, but the estate itself was sacrosanct because Austria was one of Germany's chief allies and she was the widowed sister-in-law of the Austrian emperor.

As Charlotte's illness progressed, her paranoia faded. She remained deeply in love with her husband. After his death, she cherished all of the surviving possessions they had enjoyed in common. The bias of the historiography of the time makes it difficult to assess to what extent she suffered from alleged mental conditions such as psychosis, paranoia and monomania. Her considerable fortune as one of the richest women of Europe was administered by baron de Goffinet, a servant of King Leopold II, who ensured that the money was used for his personal colonization of the Congo.[2]

Charlotte died of pneumonia brought on by influenza at the Bouchout Castle, in Meise, Belgium, on 19 January 1927, and is buried at the Church of Our Lady of Laeken.

Charlotte is also referenced in the first season of The Dick Van Dyke Show in an episode titled "Empress Carlotta's Necklace."

American film production company Two M Films, has announced a project entitled 'Bringing Back Charlotte'. The company gained exclusive access to the archives of the Belgian royal palace, and were allowed to read the letters the empress had written to her father and brothers, while being in Mexico. Belgian born writer/director Maxime Brulein is said to direct the film, which he wrote the screenplay for.[3]

The musical Carlota, a serpentine crown (2009) by composer and scenarist Marcel Wick portrays Charlotte as a woman driven by ambition towards inevitable disaster.