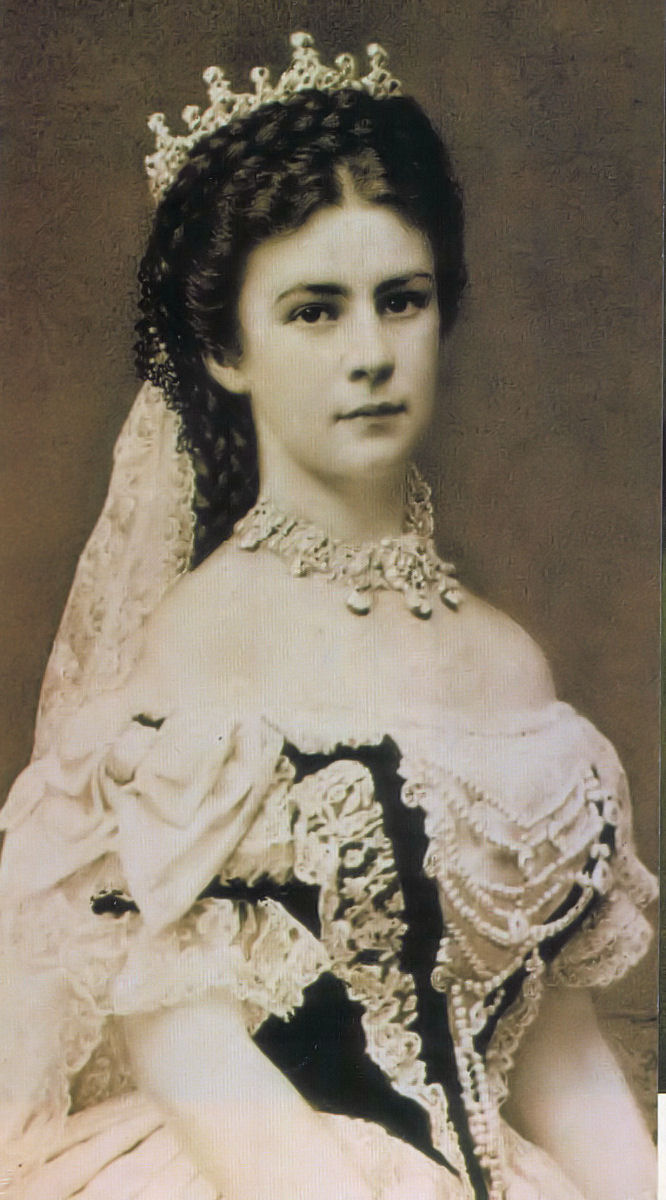 Elisabeth Amalie Eugenie (, &ndash; , ) of the House of , was the consort of and of , being married to the Emperor Franz Joseph I. Her father was and her mother was Ludovika, Royal Princess of Bavaria; her family home was . From an early age, she was called "Sissi" by family and friends.

She was born in , . Elisabeth accompanied her mother and her 18-year-old sister, Helene, on a trip to the resort of , [http://www.aeiou.at/aeiou.encyclop.b/b041313.htm;internal&action=_setlanguage.action?LANGUAGE=en] , where they hoped Helene would attract the attention of their maternal first cousin, 23-year-old Franz Joseph, then Emperor of Austria. Instead, Franz Joseph chose Elisabeth, and the couple were married in at St. Augustine's Church on , . Elisabeth later wrote that she regretted accepting his proposal for the rest of her life.Fact|date=September 2007

Elisabeth had difficulty adapting to the strict etiquette practiced at the court. Nevertheless she bore the Emperor three children in quick succession: (1855&ndash;1857), (1856&ndash;1932), and the hoped-for crown prince, Rudolf (1858&ndash;1889). In 1860 she left Vienna after contracting a lung-disease which was presumably psychosomatic. She spent the winter in Madeira and only returned to Vienna after having visited the Ionian Islands. Soon after that she fell ill again and returned to Corfu. After that Elisabeth began to use her beauty to gain influence on her husband. She achieved her only political goal whereby in 1867 she and were crowned King and Queen of Hungary, and ten months later, another child (1868&ndash;1924) followed. Elisabeth was denied any major influence on her older children's upbringing, however &mdash; they were raised by her mother-in-law Sophie, who often referred to Elizabeth as their "silly young mother. [Martyrdom of an Empress, (C) 1899 Harpers] " Soon after Marie Valerie's birth the marriage again started to deteriorate, undone by Elisabeth's increasingly erratic behaviour.

To ease her pain and illnesses, Elisabeth embarked on a life of travel, seeing very little of her offspring, visiting places such as , , , and , where she commissioned the building of a castle which she called "Achilleion " &mdash; after her death the building was sold to the German Emperor Wilhelm II. She not only became known for her beauty, but also for her fashion sense, diet and exercise regimens, passion for riding sports, and a series of reputed lovers. She paid extreme attention to her appearance and would spend most of her time preserving her beauty. Her diet and exercise regimens were strictly enforced to maintain her 20-inch (50 cm) waistline and reduced her to near emaciation at times (symptoms of what is now recognised as anorexia). One of the few things she would eat was raw veal meat juice, squeezed from her juice press, then boiled and seasoned. Fact|date=September 2007 One of her alleged lovers was George "Bay" Middleton, a dashing &ndash;Scot who was probably the father of Clementine Ogilvy Hozier (Mrs. ). She also tolerated, to a certain degree, Franz Joseph's affair with actress .

National unrest within the Habsburg monarchy caused by the rebellious Hungarians led, in 1867, to the foundation of the Austro&ndash;Hungarian double monarchy, making Elisabeth Empress of Austria and Queen of Hungary. Elisabeth had always sympathized with the Hungarian cause and, reconciled and reunited with her alienated husband, she joined Franz Joseph in , where their took place. In due course, their fourth child, was born (1868&ndash;1924). Afterwards, however, she again took up her former life of restlessly travelling through Europe.

The Empress also engaged in writing poetry (such as the "Nordseelieder" and "Winterlieder", both inspirations from her favorite German poet, ). Shaping her own fantasy world in poetry, she referred to herself as , 's Fairy Queen. Most of her poetry refers to her journeys, classical Greek and romantic themes, as well as ironic mockery on the Habsburg dynasty. In these years, Elisabeth also took up with an intensive study of both ancient and modern Greek, drowning in 's and . Numerous Greek lecturers (such as Marinaky, Christomanos, and Barker) had to accompany the Empress on her hour-long walks while reading Greek to her. According to contemporary scholars, Empress Elisabeth knew Greek better than any of the Bavarian Greek Queens in the 19th century.

In 1889, Elisabeth's life was shattered by the death of her only son: 30-year-old Crown Prince Rudolf and his young lover were found dead, apparently by suicide. The scandal is known by the name "Mayerling", after the name of Rudolf's hunting lodge in .

After Rudolf's death, the Empress continued to be an icon, a sensation wherever she went: a long black gown that could be buttoned up at the bottom, a white parasol made of leather and a brown fan to hide her face from curious looks became the trademarks of the legendary Empress of Austria. Only a few snapshots of Elisabeth in her last years are left, taken by photographers who were lucky enough to catch her without her noticing. The moments Elisabeth would show up in Vienna and see her husband were rare. Interestingly, their correspondence increased during those last years and the relationship between the Empress and the Emperor of Austria had become platonic and warm. On her imperial steamer, Miramar, Empress Elisabeth travelled restlessly through the . Her favourite places were Cap Martin on the , where tourism had only started in the second half of the 19th century, in , in Austria, where she would spend her summers, and . More than that, the Empress had visited countries no other Northern royal went to at the time: Portugal, Spain, Morocco, Algeria, Malta, Greece, Turkey and Egypt. Travel had become the sense of her life but also an escape from herself.

On , in , , Elisabeth, aged 60, was stabbed in the heart with a sharpened file by a young named , in an act of . She had been walking along the promenade of about to board steamship "Genève" for with her lady-of-courtesy, Countess Sztaray, when she was attacked. Unaware of the severity of her condition she still boarded the ship. Bleeding to death from a puncture wound to the heart, Elisabeth's last words were "What happened to me?" [ [http://www.biographybase.com/biography/Elisabeth_of_Austria.html Biography Base] ] The strong pressure from her corset kept the bleeding back until the corset was removed. Only then did her staff and surrounding onlookers understand the severity of the situation. Reportedly, her had hoped to kill a prince from the House of Orléans and, failing to find him, turned on Elisabeth instead. As Lucheni afterward said, "I wanted to kill a royal. It did not matter which one." [ [http://www.biographybase.com/biography/Elisabeth_of_Austria.html Biography Base] ]

The empress was buried in the in Vienna's city centre which has for centuries served as the Imperial burial place.

While Elisabeth's role and influence on Austro-Hungarian politics should not be overestimated (she is only marginally mentioned in scholarly books on Austrian history), she has undoubtedly become a 20th century , often compared to . She was considered to be a free spirit who abhorred conventional court protocol. She has inspired filmmakers and theatrical producers alike.

In the 1980s, , a historian renowned for her book on 's early years in Vienna (see bibliography), wrote a biography of Elisabeth, again fuelling interest in Franz Joseph's consort.

has profited enormously from the renewed interest in Elisabeth and vice versa, both in Austria and abroad. Apart from the usual s such as T-shirts and coffee mugs, visitors are eager to see the various residences Elisabeth frequented at different points in her life. These include her apartments in the Hofburg and the in , the imperial villa in , the Achilleion in , that she built in 1890, soon after her son's tragic death, and her summer residence in Gödöllő, Hungary.

Elisabeth loved far more than Austria and surrounded herself with Hungarian ladies-in-waiting, being particularly close to Marie Festetics and Ida Ferenczy. She insisted that her attendants speak Hungarian, which she herself spoke fluently. One of her closest friends was Count Andrássy, who later became Emperor Franz-Joseph's Foreign Minister. Elisabeth's attachment to Hungary benefitted the Empire because the returned the attachment but also antagonized the Viennese and the Czechs of Bohemia. There are several sites in Hungary named after her, two of 's districts, and , and most famously, .

In literature, film, television and theatre

In the German-speaking world, her name will forever be associated with a trilogy of romantic films about her life directed by and starring a teenaged in the title role:

The three films, now newly restored, are shown every Christmas on Austrian and German TV and have done much to create the myth surrounding Elisabeth. A condensed version dubbed in English was published under the title "Forever My Love".

Schneider loathed the role, claiming, "Sissi sticks to me like porridge ("Griessbrei")." Later she was able to achieve a sort of satisfaction, appearing as a much more realistic and fascinating Elisabeth in 's "Ludwig" a 1972 movie about Elisabeth's cousin, . A portrait of herself in this film was the only one of her roles she had displayed in her home.

also played the Empress in the 1968 film "Mayerling". ( and played the doomed lovers). She, also, had one sole film portrait of herself on display in her home: it was from this film.

She was the subject of a 1991 German movie called "Sissi/Last Minute" (original "Sisi und der Kaiserkuß" "Sissi and the kiss of the Emperor"). The movie starred as Sissi, as and as Nene. [imdb title|id=0102936|title=Sissi und der Kaiserkuß]

In 1974, Elisabeth was portrayed in the British television series "" by (as the young Elisabeth) and (as Elisabeth at the time of Prince Rudolf's death).

In Japan, the has performed a large musical version of her life since 1996. (See the "In Music" section).

Her story also became part of a series: "The Royal Diaries: Elisabeth: The Princess Bride". Fact|date=September 2007 In one of the episodes of the Austrian TV show, "Kommissar Rex" (1994), about a police dog who always solves his police-inspector owner's cases, the myth of Sissi is shown under the influence of her story on a young woman who often sneaks into a palace where Sissi lived and starts acting like her during the night, when the museum is closed. This includes riding in the park, using hair ornaments similar to the ones Elisabeth was known for using and even sleeping in the Empress's bed, dressed in vintage nightwear, after having brushed her hair in Sissi's way, separating it in two parts spread over the pillow so that the strands wouldn't be mussed by morning: all this, of course, using Sissi's old brush. This episode, the thirteenth of Season 5 of the show (and the last from that season), is called "Sissi" and originally aired on . The empress-obsessed character's name is Marion, and she is played by actress Marion Mitterhammer.

Her younger years are portrayed in a children's series in 1997 called .

In 2007, German comedian and director released a computer-animated parody film of Sissi's character under the title "" (lit.: "Lissi and the Wild Emperor"). It is based on his Sissi parody sketches featured in his TV show "".

In dance and music

composed a comic opera 'Sissi', which premiered in Vienna in 1932. The libretto was written by Ernst and Hubert Marischka.

In 1992, the musical "Elisabeth" premièred at the in , . Written by Michael Kunze (, ) and (), with the leading role of the Empress played by of the Netherlands. It has also been produced successfully in Hungary, Germany, Switzerland, the Netherlands, Sweden, Finland and in Japan, with Douwes also again performing the role of Sissi in the Netherlands, Berlin, Essen and Stuttgart.

In the film version of 's "The Phantom of the Opera", the character Christine is wearing a gown inspired by a portrait of Elizabeth of Bavaria by during her opera debut when she performs the song "Think of Me".

French ballet dancer appeared to great acclaim at the in a piece titled "" , choreographed by .

Elisabeth has a featured role in 's ballet, "Mayerling" including a "" with her son Prince Rudolf, the central character in the ballet; and a notable "" with five male partners, Bay Middleton and four Hungarian officers, friends of her son.

Dutch singer Petra Berger's album Eternal Woman includes "If I Had a Wish", a song about Elisabeth.