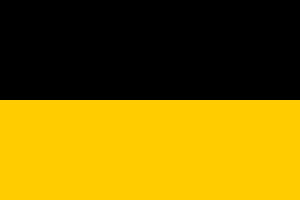 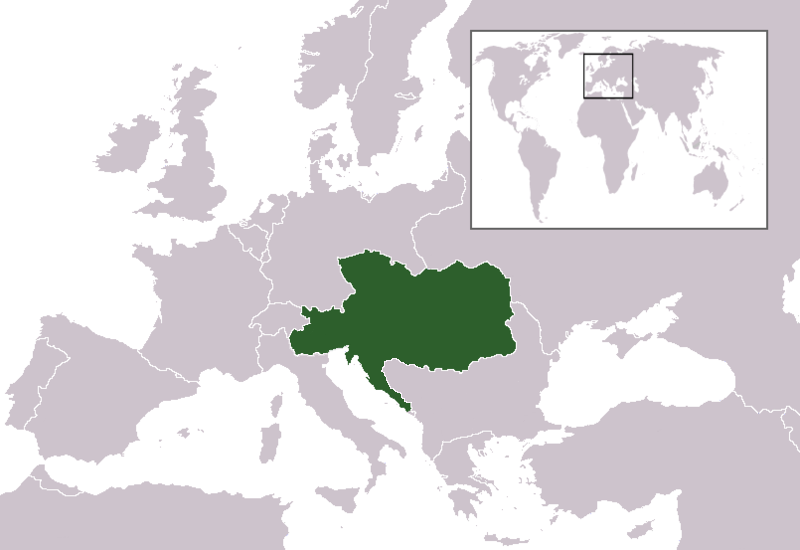 image_map_caption = The Austrian Empire
capital =
latd=48|latm=12|latNS=N|longd=16|longm=21|longEW=E
largest_city =
government_type = Monarchy
title_leader = Emperor
leader1 = Francis I
year_leader1 = 1804&ndash;1835
leader2 = Ferdinand I
year_leader2 = 1835&ndash;1848
leader3 = Franz Joseph I
year_leader3 = 1848&ndash;1867The Austrian Empire ( _de. Kaisertum Österreich) was a modern era successor founded on a remnant of the centered on what is today's that officially lasted from 1804 to 1867. It was followed by combining the Royal House with that of creating the dual monarchy (also known as the "Austro-Hungarian Empire" (1867 to 1918), which itself as one of the losers was dissolved at the end of and broken into separate new states).

The term "Austrian Empire" is also used for the possessions before 1804, which had no official collective name, although "Austria" is more frequent; the term has also been used, incorrectly, of .

The Austrian Empire was founded by the Habsburg monarch Holy Roman Emperor Francis II (who became Emperor Francis I of Austria), as a comprising his personal lands within the larger Empire.

This was a reaction to Napoleon Bonaparte's proclamation of the in 1804.

Austria and some parts of the Holy Roman Empire then took the field against France and its German allies in the during the which lead to the crushing defeat at Austerlitz in early December 1805. By the fourth, the armies were in a cease fire in place and conducting peace talks nearby.

Subsequently, Francis II agreed to the humiliating (December 1805), which in practice meant dissolution of the long-lived with a reorganization of the lost German territories under a Napoleonic imprint into a precursor state of what became modern Germany, those possessions nominally having been part of the Holy Roman Empire within the present boundaries of Germany, as well as other measures weakening Austria and the Habsburgs in other ways. Certain Austrian holdings in Germany were passed to French allies — the , the and the . Austrian claims on those German states were renounced without exception.

One consequence of that was eight months later on , Francis II dissolved the Holy Roman Empire, due to the formation of the by France; as he did not want Napoleon to succeed him. This action was unrecognized by who was also the Elector of Hanover who had also lost his German territories around Hanover to Napoleon. The English claims were settled by the creation of the which was held by George's British heirs until Queen Victoria's ascension, after which point it split into the British and Hanoverian royal families.

Although the office of Holy Roman Emperor was elective, the had held the title since 1440 (with one brief interruption) and Austria was the core of their territories.

The Austrian Empire did not originally include the , and its extensive dependent territories, which the Habsburgs had ruled since 1541; Hungary was incorporated after the defeat of the revolutionaries during the 1848/49 revolution. Much controversy ensued, including Hungarian efforts to obtain constitutional reform by declining to crown the new Emperor Francis Joseph as King of Hungary. After Austria was defeated in the of 1866, and left the , the Austrian Empire was transformed into the Austro-Hungarian Empire by the , which granted Hungary and the Hungarian lands equal status to the rest of Austria as a whole.

Changes shaping the nature of the Austrian Empire took place during conferences in (1797-1799) and (1801-1803). On , the Imperial ( _de. Reichsdeputationshauptschluss) was declared, which greatly reduced the number of clerical territories from 81 to only 3 and imperial cities from 51 to 6. This measure was aimed at replacing the old constitution of the Holy Roman Empire, but the actual consequence of the Imperial Recess was the end of the Holy Roman Empire. Taking this significant change into consideration, Francis II created the title Emperor of Austria, for himself and his successors, abandoning the title of Holy Roman Emperor later in 1806.

The fall and dissolution of the Empire was accelerated by French intervention in the Empire in September 1805. On , an Austrian army led by general Karl Mack von Leiberich was defeated by French armies near the town of . The French victory resulted in the capture of 20,000 Austrian soldiers and many cannons. Napoleon’s army won another victory in the on . In light of those events, Francis was forced to negotiate with the French from to . These negotiations were concluded by an armistice on .

The French victories encouraged rulers of certain imperial territories to assert their formal independence from the Empire. On , the Duke of Bavaria proclaimed himself King, followed by the elector Duke of Württemberg on 11 December. Finally, on 12 December, the of was given the title of . In addition, each of these new countries signed a treaty with France and became French allies. The between France and Austria, signed in Pressburg (today , ) on , enlarged the territory of Napoleon's German allies at the expense of defeated Austria.

On , the was established comprising 16 sovereigns and countries. This confederation, under French influence, put an end to the . On , even Francis recognized the new state of things and claimed the dissolution of the Holy Roman Empire.

When, on , assumed the title of first , the empire spanned from present-day to present-day and to the . The multi-national makeup of the empire is illustrated by the fact that its population included , s, , , Czechs, , , s, , Serbs, and numerous smaller nationalities. The emperor ruled Austria as the namesake, but also held the title of , , Croatia, Slavonia and , leading to the Empire's multi-national army being styled the "" (Imperial-Royal Army). The Empire had a structure, although some degree of autonomy was left to Hungary which was ruled by its own Diet, and to .

The years 1804-1815 in Austrian foreign policy were significantly determined by the . After signed a peace treaty with France on , , Austria was forced to carry the main burden of war with the French Republic/Empire for almost ten years. This situation led to a distortion of Austrian economy contributing Austrians perceived the war in a highly unpopular manner. With regard to the mentioned mood, Emperor Francis II refused to join the next war against Napoleonic France for long time. On the other hand, Francis II did not abandon a possibility of a revenge on France and therefore he entered into a secret military agreement with the in November 1804. This convention was to assure a mutual cooperation between Austria and Russia in the case of a new war against France.

An apparent unwillingness of Austria to join the was overcome by British subsidies. A decisive defeat at put an end to Austrian membership in the . Although the Austrian suffered from wartime expenditures and its international position was significantly undermined, the humiliating provided plenty of time to strengthen the army and economy. Moreover, an ambitious Archduke Charles together with pursued a new war with France.

Archduke Charles of Austria served as the Head of the Council of War and Commander in Chief of the Austrian army. Endowed with the enlarged powers, he reformed the Austrian Army to preparedness for another war. Johann Philipp von Stadion, the foreign minister, personally hated due to an experience of confiscation of his possessions in France by Napoleon. In addition, the third wife of Francis II, , agreed with Stadion's efforts to begin a new war. , located in , called for careful advance in the case of the war against France. The defeat of French army at the in Spain on triggered the war. On , an Austrian force of 170,000 men attacked .

Despite military defeats - especially high magnitude losses like those at the Battles of Marengo, Ulm, Austerlitz and Wagram - and consequently lost territory throughout the Revolutionary and Napoleonic Wars (the Treaties of Campo Formio in 1797, Pressburg in 1806, and Schönbrunn in 1809), Austria played a decisive part in the overthrow of Napoleon in the campaigns of 1813-14.

The latter period of Napoleonic Wars featured Metternich exerting a large degree of influence over foreign policy in the Austrian Empire, a matter nominally decided by the Emperor. Metternich initially supported an alliance with France, arranging the marriage between Napoleon and the Francis II's daughter, Marie-Louise; however, by the 1812 campaign, he had realised the inevitability of Napoleon's downfall and took Austria to war against France. Metternich's influence at the was remarkable, and he became not only the premier statesman in Europe but virtual ruler of the Empire until 1848 - the Year of Revolutions - and the rise of equated to his political downfall.