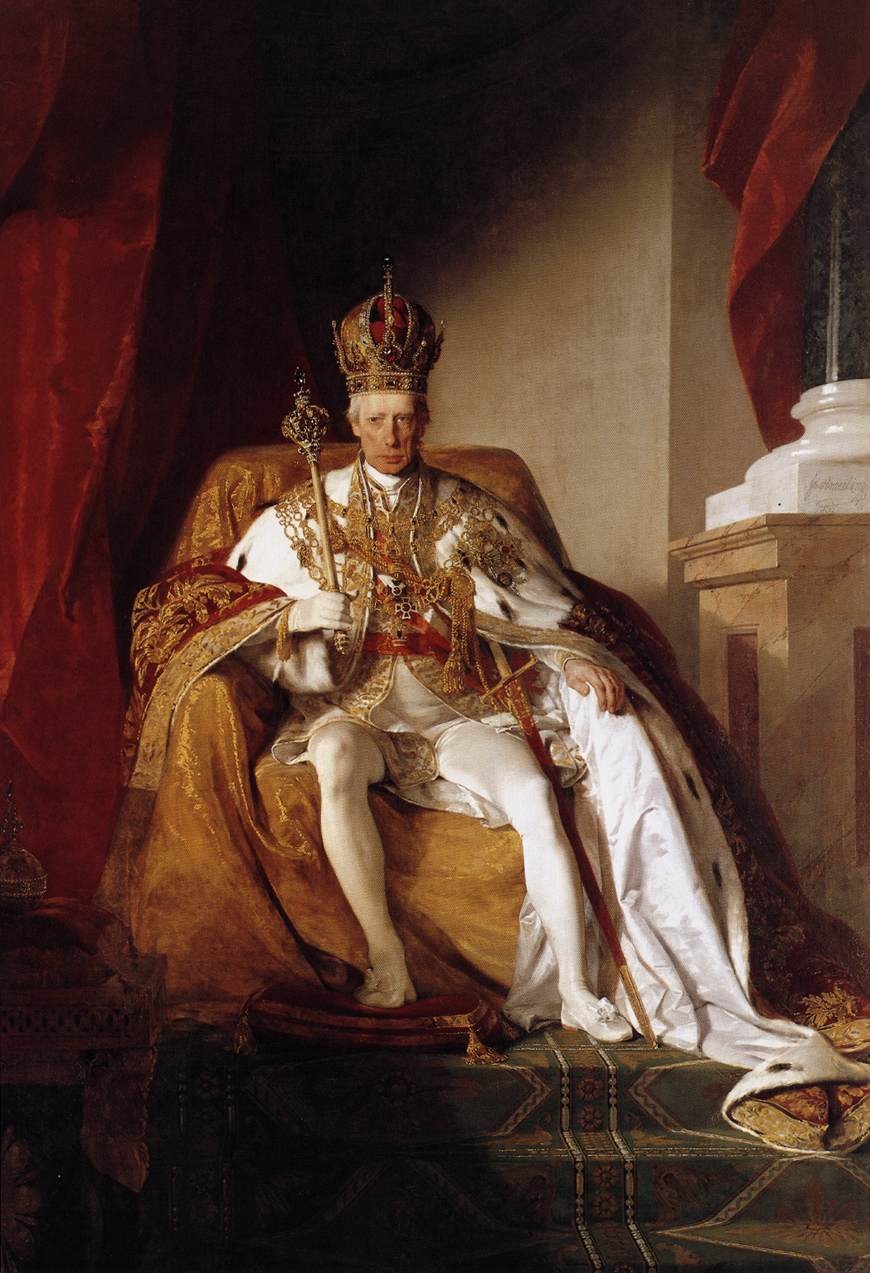 Francis II ( _de. Franz II, Heiliger Römischer Kaiser) ( &ndash; ) was the last , ruling from 1792 until , , when he dissolved the Empire after the disastrous defeat of the by Napoleon at the . In 1804 he had founded the and became Francis I of Austria ("Franz I."), the first , ruling from 1804 to 1835, so later he was named the one and only "Doppelkaiser" (double emperor) in history. For the two years between 1804 and 1806 Francis used the title and style "by the grace of God elected Roman Emperor, always August, hereditary Emperor of Austria" and he was called the "Emperor of both Germany and Austria". He was also King of as "I. Ferenc". Francis I continued his leading role as an opponent of Napoleonic France in the , and suffered several more defeats after Austerlitz. The proxy marriage of state of his daughter to Napoleon I on , was assuredly his most severe defeat.

Francis was a son of Emperor Leopold II (1747 &ndash; 1792) and his wife (1745 &ndash; 1792), daughter of . Francis was born in , the capital of Tuscany where his father reigned as Grand Duke from 1765–90. Though he had a happy childhood surrounded by his many siblings, [cite book |last=Wheatcroft|title=The Habsburgs |accessdate=2007-05-07|pages=p. 233] his family knew Francis was likely to be a future Emperor (his uncle Joseph had no surviving issue from either of his two marriages), and so in 1784 the young Archduke was sent to the Imperial Court in to educate and prepare him for his future role.

Emperor Joseph himself took charge of Francis's development, and his disciplinarian regime was a stark contrast to the indulgent Florentine Court of Leopold. The Emperor wrote that Francis was "stunted in growth", "backward in bodily dexterity and deportment", and "neither more nor less than a spoiled mother's child". Joseph concluded that "…the manner in which he was treated for upwards of sixteen years could not but have confirmed him in the delusion that the preservation of his own person was the only thing of importance."

Joseph's method of improving the young Francis were "fear and unpleasantness". [cite book |last=Wheatcroft|title=The Habsburgs| accessdate=2007-05-07|pages=p. 235] The young Archduke was isolated, the reasoning being that this would make him more self-sufficient as it was felt by Joseph that Francis "fail [ed] to lead himself, to do his own thinking". Nonetheless, Francis greatly admired his uncle, if rather feared him. To complete his training, Francis was sent to join an army regiment in and he settled easily into the routine of military life. [cite book |last=Wheatcroft|title=The Habsburgs|accessdate=2007-05-07|pages=p. 236]

After the death of Joseph II in 1790, Francis's father became Emperor. He had an early taste of power while acting as Leopold's deputy in Vienna while the incoming Emperor traversed the Empire attempting to win back those alienated by his brother's policies. [cite book |last=Wheatcroft|title=The Habsburgs| accessdate=2007-05-07|pages=p. 238] The strain told on Leopold, and by the winter of 1791 he became ill. He gradually worsened throughout early 1792, and, on the afternoon of Leopold died, at the relatively young age of 44. Francis, just past his 24th birthday, was now Emperor much sooner than he had expected.

As the leader of the large multi-ethnic , Francis felt threatened by Napoleon's call for liberty and equality in . Francis had a fraught relationship with . His aunt Marie Antoinette died under the at the beginning of his reign. Francis, on the whole, was indifferent to her fate (she was not close to his father Leopold, and Francis had met her, but when he was of an age that was too young for Francis to remember). attempted to negotiate with the Emperor for Marie Antoinette's release from captivity, but Francis was unwilling to make any concessions in return. [cite book |last=Fraser|title=M.Antoinette |accessdate=2007-05-07|pages=p. 492] Later, he led Austria into the and was defeated by Napoleon. By the , he ceded the left bank of the to France in exchange for and . He again fought against France during the Second and Third Coalition, when after meeting crushing defeat at Austerlitz, he had to agree to the , which effectively dissolved the , weakening the and reorganizing present-day under a Napoleonic imprint.

In 1809, Francis attacked France again, hoping to take advantage of the embroiling Napoleon in . He was again defeated, and this time forced to ally himself with Napoleon, ceding territory to the Empire, joining the , and wedding his daughter Marie-Louise to the Emperor. Francis essentially became a of the Emperor of the French. The drastically weakened Austria and threatened its preeminence among the states of Germany, a position that it would eventually cede to the .

In 1813, for the fourth and final time, Austria turned against France and joined Great Britain, Russia, and Prussia in their war against Napoleon. Austria played a major role in the final defeat of France—in recognition of this, Francis, represented by , presided over the , helping to form the and the , ushering in an era of and in Europe. The , a loose association of an states was created by the Congress of Vienna in 1815 to organize the surviving states of the Holy Roman Empire. The Congress was a personal triumph for Francis, where he hosted the assorted dignitaries in comfort, [cite book |last=Wheatcroft|title=The Habsburgs |accessdate=2007-05-07|pages=p. 249] though Francis undermined his allies Tsar Alexander and by negotiating a secret treaty with the restored French king Louis XVIII. [cite book |last=Wheatcroft|title=The Habsburgs |accessdate=2007-05-07|pages=p. 250]

The federal Diet met at under Austrian (in fact the Habsburg Emperor was represented by an Austrian 'presidential envoy').

The events of the French Revolution impressed themselves deeply into the mind of Francis, and he came to distrust 'radicalism' in any form. In 1794, a '' conspiracy was discovered in the Austrian and Hungarian armies. [cite book |last=Wheatcroft|title=The Habsburgs |accessdate=2007-05-07|pages=p. 239] The leaders were put on trial, but the verdicts only skirted the perimeter of the conspiracy. Francis's brother Alexander Leopold (at that time ) wrote to the Emperor admitting "Although we have caught a lot of the culprits, we have not really got to the bottom of this business yet." Nonetheless, two officers heavily implicated in the conspiracy were hanged and ed, while many others were sentenced to imprisonment (where many died in the conditions).

Francis was by nature suspicious, [cite book |last=Wheatcroft|title=The Habsburgs |accessdate=2007-05-07|pages=p. 251] and set up an extensive network of police spies and censors to monitor dissent

Francis presented himself as an open and approachable monarch (he regularly set aside two mornings each week to meet his imperial subjects, regardless of status, by appointment in his office, even speaking to them in their own language), [cite book |last=Wheatcroft|title=The Habsburgs |accessdate=2007-05-07|pages=p. 245] but his will was sovereign. In 1804, he had no compunction about announcing that through his authority as Holy Roman Emperor, he declared he was now Emperor of Austria (at the time a geographical term that had little resonance). Two years later, Francis personally wound up the moribund Holy Roman Empire of the German Nation. Both actions were of dubious constitutional legality. [cite book |last=Wheatcroft|title=The Habsburgs |accessdate=2007-05-07|pages=p. 246] Infobox Austrian monarch styles
royal name = Emperor Francis II of Austria
dipstyle = His Imperial Majesty
offstyle = Your Imperial Majesty
altstyle = My Lord

Francis was a devoted family man, and a main point in the political testament he left for his son and heir Ferdinand was "Preserve unity in the family and regard it as one of the highest goods". In many portraits (particularly those painted by ) he was portrayed as the patriarch of a loving family, surrounded by his children and grandchildren.

On , 43 years and a day after his father's death, Francis died in Vienna of a sudden fever aged 67, in the presence of many of his family and with all the religious comforts.

After 1806 he used the titles: "We, Francis the First, Emperor of Austria; King of Jerusalem, Hungary, Bohemia, Dalmatia, Croatia, Slavonia, Galicia and Lodomeria; Archduke of Austria; Duke of Lorraine, Salzburg, , , Styria, Carinthia and ; ; Grand Prince of Transylvania; Margrave of Moravia; Duke of , Masovia, , Upper and Lower Silesia, Auschwitz and Zator, Teschen and Friule; Prince of and ; Princely Count of Habsburg, and Gradisca and of the ; and Margrave of Upper and Lower and in ". 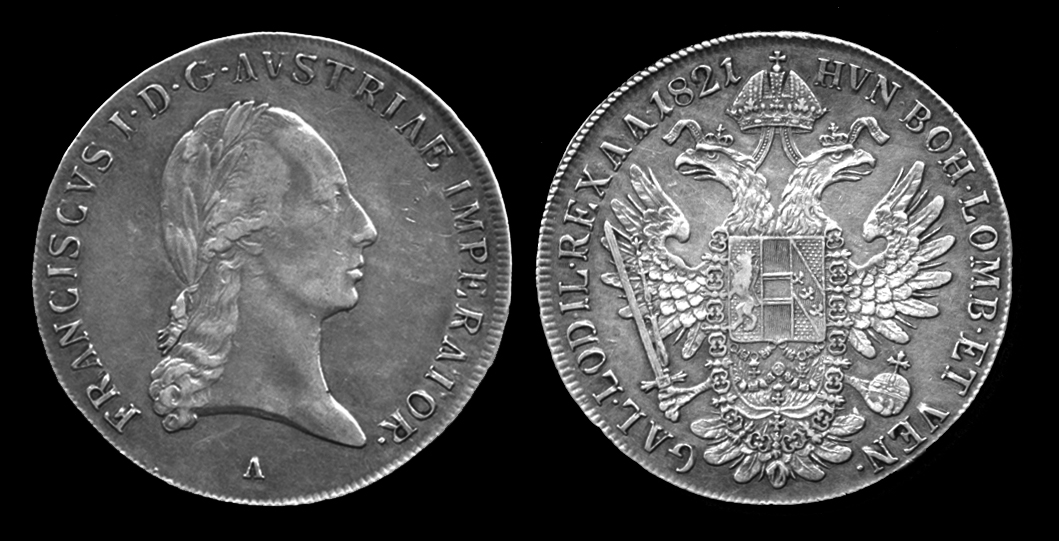 caption_left = By the time the coin was minted, Francis had abdicated the title of "Holy Roman Emperor," and his title had changed to Francis I of Austria. Obverse: (Latin) "FRANCISCVS I, D [EI] G [RATIA] AVSTRIAE IMPERATOR," or in English, "Francis I, by the Grace of God, Emperor of Austria"
caption_right = Reverse: (Latin) "HVN [GARIAE] BOH [EMIAE] LOMB [ARDIAE] ET VEN [ETIARUM] GAL [ICIAE] LOD [OMERIA] IL [LYRIAE] REX A [RCHIDUX] A [VUSTRIAE] 1821", or in English, "King of Hungary, Bohemia, Lombardy-Venetia, Galicia, Lodomeria, and Illyria, Archduke of Austria 1821."
width = 250
position = center
margin = 0

From his first wife , one daughter, and his second wife , eight daughters and four sons :