Archduke Charles of Austria, Duke of Teschen (de: Erzherzog Karl von Österreich, Herzog von Teschen, also known as Karl von Österreich-Teschen) (Full name: Karl Ludwig Johann Josef Lorenz of Austria) (5 September 1771 – 30 April 1847) was an Austrian field-marshal, the third son of emperor Leopold II and his wife Infanta Maria Luisa of Spain. He was also the younger brother of Francis II, Holy Roman Emperor. Despite being epileptic, Charles achieved respect both as a commander and as a reformer of the Austrian army. He was considered one of Napoleon's most formidable opponents.

He began his career fighting the revolutionary armies of France. Early in the wars of the First Coalition, he saw victory at Neerwinden in 1793, before tasting defeat at Wattignies 1793 and Fleurus 1794. In 1796, as chief of all Austrian forces on the Rhine, Charles out-generaled Jean-Baptiste Jourdan at Amberg and Würzburg, and forced Jean Victor Marie Moreau to withdraw across the Rhine, and followed these victories with others at Zürich, Ostrach, Stockach, and Messkirch in 1799. He reformed Austria's armies to adopt the nation at arms principle; in 1809, he went into the War of the Fifth Coalition with confidence and inflicted Napoleon's first major setback at Aspern-Essling, before suffering a massive defeat at the Battle of Wagram. Following Wagram, Charles saw no more significant action in the Napoleonic Wars.

As a military strategist, historians compare him to Arthur Wellesley, 1st Duke of Wellington, conservative, cautious, and competent. Charles was a study in contrasts. As a practitioner, he was flawless in executing complex and risky maneuvers of troops in the heat of battle, achieving brilliant victories in the face of almost certain defeat. Yet, as a theoretician, his devotion to ground and caution led his contemporary, Carl von Clausewitz, to criticize his rigidity and adherence to geographic strategy. Regardless, he remains among Austria's pantheon of heroes of the French Revolutionary and Napoleonic wars.

Charles was born in Florence, Italy, where his father was then Grand Duke. In a generous act by his father, he was adopted and raised in Vienna by his childless aunt Archduchess Marie Christine of Austria and her husband Albert of Saxe-Teschen. His youth was spent in Tuscany, at Vienna and in the Austrian Netherlands, where he began his career of military service in the war of the French Revolution. He commanded a brigade at the Battle of Jemappes, and in the campaign of 1793 distinguished himself at the Action of Aldenhoven and the Battle of Neerwinden. In this year he became Statthalter in Belgium and received the army rank of lieutenant field marshal. This promotion was soon followed by that to Feldzeugmeister. In the remainder of the war in the Low Countries he held high commands, and was present at the Battle of Fleurus.

In 1795 he served on the Rhine, and in the following year was entrusted with chief control of all the Austrian forces on that river. His conduct of the operations against Jourdan and Moreau in 1796 marked him out at once as one of the greatest generals in Europe. At first falling back carefully and avoiding a decision, he finally marched away, leaving a mere screen in front of Moreau. Falling upon Jourdan he beat him in the battles of Amberg and Würzburg, and drove him over the Rhine with great loss. He then turned upon Moreau's army, which he defeated and forced out of Germany. 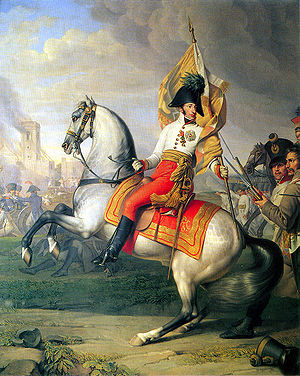 Victorious Archduke Charles of Austria during the Battle of Aspern-Essling (21–22 May 1809).
See also: Imperial and Royal Army during the Napoleonic Wars

In 1797 he was sent to arrest the victorious march of General Bonaparte in Italy, and he conducted the retreat of the over-matched Austrians with the highest skill. In the campaign of 1799 he once more opposed Jourdan, whom he defeated in the battles of Ostrach and Stockach, following up his success by invading Switzerland and defeating Masséna in the First Battle of Zürich, after which he re-entered Germany and drove the French once more over the Rhine.[1]

Ill-health, however, forced him to retire to Bohemia, but he was soon recalled to undertake the task of checking Moreau's advance on Vienna. The result of the Battle of Hohenlinden had, however, foredoomed the attempt, and the archduke had to make the armistice of Steyr. His popularity was now such that the Eternal Diet of Regensburg, which met in 1802, resolved to erect a statue in his honor and to give him the title of savior of his country, but Charles refused both distinctions.

In the short and disastrous war of 1805 Archduke Charles commanded what was intended to be the main army in Italy, but events made Germany the decisive theatre of operations; Austria sustained defeat on the Danube, and the archduke was defeated by Massena in the Battle of Caldiero. With the conclusion of peace he began his active work of army reorganization, which was first tested on the field in 1809. As generalissimo of the army he had been made field marshal some years before.

In 1806 Francis II (now Francis I of Austria) named the Archduke Charles Commander in Chief of the Austrian army as well as Head of the Council of War. Supported by the prestige of being the only general who had proved capable of defeating the French, he promptly initiated a far-reaching scheme of reform, which replaced the obsolete methods of the 18th century. The chief characteristics of the new order were the adoption of the nation in arms principle and the adoption of French war organization and tactics. The army reforms were not yet completed by the war of 1809, in which Charles acted as commander in chief, yet even so it proved a far more formidable opponent than the old and was only defeated after a desperate struggle involving Austrian victories and large loss of life on both sides.

Its initial successes were neutralized by the reverses of Abensberg, Landshut and Eckmuhl but, after the evacuation of Vienna, the archduke won a strong victory at the Battle of Aspern-Essling but soon afterwards lost decisively at the Battle of Wagram. At the end of the campaign the archduke gave up all his military offices.

When Austria joined the ranks of the allies during the War of the Sixth Coalition, Charles was not given a command and the post of commander-in-chief of the allied Grand Army of Bohemia went to the Prince of Schwarzenberg. Charles spent the rest of his life in retirement, except for a short time in 1815 when he was military governor of the Fortress Mainz. In 1822 he succeeded to the duchy of Saxe-Teschen.

Frederick William was the eldest surviving son of Karl Christian of Nassau-Weilburg and Princess Wilhelmine Carolina of Orange-Nassau.

Wilhelmine Carolina was a daughter of William IV, Prince of Orange and Anne, Princess Royal and Princess of Orange. Anne was in turn the eldest daughter of George II of Great Britain and Caroline of Ansbach.

Charles died at Vienna on 30 April 1847. He is buried in tomb 122 in the New Vault of the Imperial Crypt in Vienna. An equestrian statue was erected to his memory on the Heldenplatz in Vienna in 1860.

Assessment of his achievements

The caution which the archduke preached so earnestly in his strategic works, he displayed in practice only when the situation seemed to demand it, though his education certainly prejudiced him in favor of the defensive at all costs. He was at the same time capable of forming and executing the most daring offensive strategy, and his tactical skill in the handling of troops, whether in wide turning movements, as at Würzburg and Zürich, or in masses, as at Aspern and Wagram, was certainly equal to that of any leader of his time, with only a few exceptions. 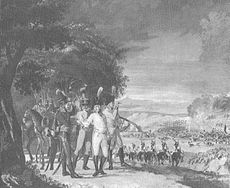 Archduke Charles at the Battle of Ostrach

His campaign of 1796 is considered almost faultless. That he sustained defeat in 1809 was due in part to the great numerical superiority of the French and their allies, and in part to the condition of his newly reorganized troops. His six weeks' inaction after the victory of Aspern is, however, open to unfavorable criticism. As a military writer, his position in the evolution of the art of war is very important, and his doctrines had naturally the greatest weight. Nevertheless they cannot but be considered antiquated even in 1806. Caution and the importance of strategic points are the chief features of his system. The rigidity of his geographical strategy may be gathered from the prescription that this principle is never to be departed from.

Again and again he repeats the advice that nothing should be hazarded unless one's army is completely secure, a rule which he himself neglected with such brilliant results in 1796. Strategic points, he says, not the defeat of the enemy's army, decide the fate of one's own country, and must constantly remain the general's main concern, a maxim which was never more remarkably disproved than in the war of 1809. The editor of the archduke's work is able to make but a feeble defense against Clausewitz's reproach that Charles attached more value to ground than to the annihilation of the foe. In his tactical writings the same spirit is conspicuous. His reserve in battle is designed to cover a retreat. 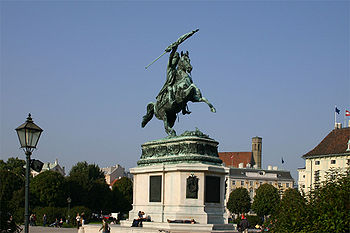 Statue of Archduke Charles on the Heldenplatz in Vienna.

The baneful influence of these antiquated principles was clearly shown in the maintenance of Königgratz-Josefstadt in 1866 as a strategic point, which was preferred to the defeat of the separated Prussian armies, and in the strange plans produced in Vienna for the campaign of 1859, and in the almost unintelligible Battle of Montebello in the same year. The theory and the practice of Archduke Charles form one of the most curious contrasts in military history. In the one he is unreal, in the other he displayed, along with the greatest skill, a vivid activity which made him for long the most formidable opponent of Napoleon.

On the battlefield, it is probably fair to say, Charles was comparable in skill and style to Sir Arthur Wellesley, 1st Duke of Wellington - quite conservative and yet exceedingly competent. Wellington is better-known to posterity, because he led one of the two Allied armies at the final decisive victory of the Napoleonic Wars (the battle of Waterloo in 1815), although Wellington's superior reputation is perhaps also because he only once faced Napoleon, whereas Charles was confronted by Napoleon in battle more times than any other commander. On these occasions the reliable and yet unimaginative tactics Charles was fond of were not sufficient, except on one occasion at Aspern-Essling, to defeat the unpredictable Corsican. Nonetheless Charles is a member of a pantheon of famous Napoleonic figures that includes the Emperor himself, Louis Nicolas Davout, Andre Massena, Karl von Schwarzenberg, Mikhail Kutuzov, Gebhard Leberecht von Blücher and the aforementioned Duke of Wellington.

He was the 831st Knight of the Order of the Golden Fleece in Austria.