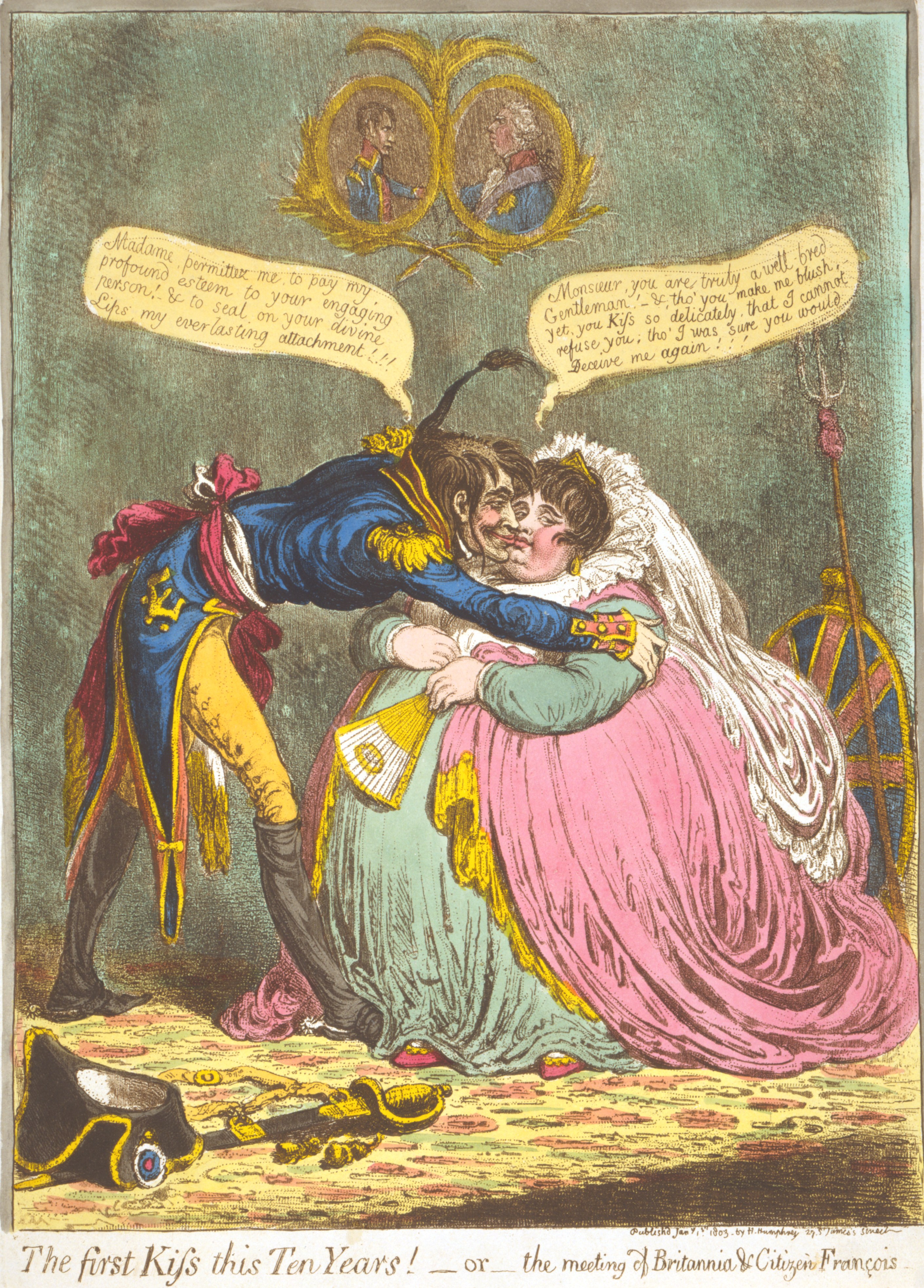 The Treaty of Amiens temporarily ended the hostilities between and the United Kingdom during the . It was signed on , (Germinal 4, year X in the ) by and the Marquess Cornwallis as a "Definitive Treaty of Peace". The consequent peace lasted only one year, and was the only period of peace during the so-called '' between 1793 and 1815. [There would also be a premature peace during the abortive first Bourbon restoration of May 1814-March 1815, interrupted by the "".] Under the treaty, the United Kingdom recognized the French Republic. Together with the (1801) the treaty of marked the end of the . The War started well for the Coalition, with General Bonaparte's reverses in Egypt. But, after France's victories at Marengo and Hohenlinden, Austria, Russia and Naples asked for peace. Nelson's victory at Copenhagen (, ) halted the creation of the and led to a negotiated ceasefire: Preliminary Articles of Peace were signed in London, October 1801, and greeted with illuminations and fireworks; in a street would be named for the treaty. [The street's name is generally pronounced "Ay-me-ens".] Peace, it was thought, would lead to the withdrawal of the imposed by Pitt, the reduction of grain prices and a revival of markets. The Treaty was made possible by William Pitt's resignation 16 February 1801, on an unrelated issue; Henry Addington replaced him. The British negotiators in Paris were led by Robert Jenkinson, Lord Liverpool.

The treaty, beyond confirming "peace, friendship, and good understanding":
*Arranged for the restoration of prisoners and hostages.
*The United Kingdom returned the to the .
*The UK returned most of its captured Dutch West Indian islands to the Batavian Republic.
*The UK withdrew its forces from .
*The UK was ceded , and .
*France withdrew its forces from the .
*The borders of were fixed.
*, , and were to be restored to the Hospitallers and the islands were declared neutral altough the islands remained under theb British Empire.
*The island of returned to Spain.

Upper-class British visitors flocked to Paris in the summer and autumn of 1802. took the opportunity to confer with his colleagues at the Observatoire. In booths and temporary arcades in the courtyard of the Louvre the third French "exposition des produits français" took place, 18-24 September. According to the memoirs of his private secretary Fauvelet de Bourrienne, Napoleon "was, above all, delighted with the admiration the exhibition excited among the numerous foreigners who resorted to Paris during the peace." [Quoted by [http://charon.sfsu.edu/publications/ParisExpositions/NapoleonicExpos.html Arthur Chandler, "The Napoleonic Expositions"] ] Among the visitors was , who received a personal tour from Minister Chaptal. Within the Louvre, in addition to the display of recent works in the Salon of 1802, visitors could see the display of Italian paintings— filled a sketchbook— and Roman sculptures collected from all over Italy under the stringent terms of the . Even the four Greek had been furtively removed in 1797 and could now be viewed in an inner courtyard. [Francis Haskell and Nicholas Penny, "Taste and the Antique" (Yale University Press) 1981, pp ch xiv 'The Last Dispersals'.] arrived at Paris, 16 October 1802: the Roman sculptures did not move him, but he spent much of three months studying and copying Italian masters in the Louvre. ["I say nothing of the statues; for I know but little of sculpture, and never liked any till I saw the Elgin Marbles.... Here, for four months together, I strolled and studied." (Hazlitt, "Table Talk:" "On The Pleasure Of Painting").] Among the stream of British visitors were the family party that included , who spent the winter in Paris, leaving hastily and landing safely at Dover, 6 March 1803; Lovell Edgeworth was not so lucky. [Hon. Emily Lawless, "Maria Edgeworth", ch. viii ( [http://digital.library.upenn.edu/women/lawless/edgeworth/chapter-VIII.html on-line text] ).] Another author, , travelled to Paris in April 1803 to see her husband comte Alexandre d'Arblay, and when hostilities resumed was required to remain until 1815.

The British government balked at implementing certain terms, such as evacuating their naval presence from Malta. After the initial fervour, objections to the treaty had quickly grown in the United Kingdom, where it seemed to the governing class that they were making all the concessions and ratifying recent developments. For his part, during the negotiated truce Bonaparte continued to support the French general 's reactionary "coup d'état" of 18 September 1801 in the , and the new constitution, ratified by a sham election, that brought it into closer alignment with its dominant partner. On 24 January, just before the signing at Amiens, Napoleon was installed as president of the new , successor to the . Earlier in that same month, Napoleon had sent forces under General to France's richest colony, , with public professions of benevolence and secret orders to reverse the revolution, to deport — dismissed as the "Africain doré" but with whom the British were treating as head of state— and to reimpose slavery. Leclerc came ashore to the smoldering ashes of Cap François, 2 February 1802; Toussaint died in a French prison 7 April 1803; [See, for example, Bob Corbett, [http://www.webster.edu/~corbetre/haiti/history/revolution/revolution3.htm "The Haitian Revolution: part III"] .] British newspaper readers followed the events, presented in strong moralising colours. Bonaparte refused additional concessions despite appeals from his Foreign Minister , so Addington strengthened the Royal Navy and imposed a blockade of France. Talks in Paris broke down in May; the British ambassador left on the 13th. ["Unfavorable termination of the discussion lately depending between his majesty and the French government, ... his majesty's ambassador left Paris on the 13th. ... Letters of marque and commissions to privateers are to be issued, and French ships to be captured, &c. The kings share of all French ships and property will be given to privateers. Homeward bound ships should wait for convoys." (Beamish Murdoch, "History of Nova Scotia" (Halifax: James Barnes, 1865), vol. 3, p. 226; noted [http://www.blupete.com/Literature/Biographies/Literary/Hazlitt/Ch008.htm#fn6] ]

In justifying an immediate "casus belli" for resumption of hostilities, it has been alleged that the United Kingdom did seize all French ships in British ports; there appears to be no evidence to support such an assertion. Napoleon certainly believed it, stating that six ships had been seized "on the high seas," although these ships and their captains have never been named. On 18 May a declaration of war was laid before Parliament. Presented as a response, on (2 Prairial, year XI) the First Consul suddenly ordered the imprisonment of all British males between the ages of eighteen and sixty in France, trapping many travelling civilians. This act was denounced as illegal by all the major powers. Napoleon claimed in the French press that the British prisoners that he had taken amounted to 10,000, but French documents compiled in Paris a few months later show that the numbers were 1,181. It was not until the abdication of Napoleon in 1814 that the last of these imprisoned British civilians were allowed to return home.

Addington proved an ineffective prime minister in wartime, and was replaced on with William Pitt, who started the . Pitt has been alleged to have been behind assassination attempts on Bonaparte's life by and Pichegru.

Napoleon, now emperor, assembled armies on the coast of France to invade , but Austria and Russia, the United Kingdom's allies, were preparing to invade France. The French armies were christened "" and secretly left the coast to march against Austria and Russia before those armies could combine. The "Grande Armée" defeated Austria at Ulm the day before the , and Napoléon's victory at the effectively destroyed the Third Coalition. In 1806, Britain re-took the from the , which Napoleon abolished later that year in favour of the Napoleonic , ruled by his brother Louis.