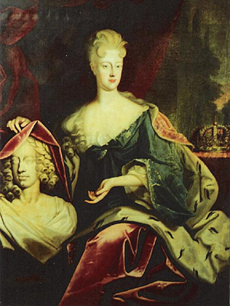 Elisabeth Christine was the eldest daughter of and his wife .

At age 13 Elisabeth Christine became engaged to the future through negotiations between her ambitious grandfather, and Charles' sister-in-law, Empress Wilhelmina Amalia, whose father was and thus belonged to another branch of the .


However, the Protestant bride opposed the marriage at first, since it involved her switching to Catholicism, but finally she gave in and on , was converted in .

At the time of the wedding, Charles was fighting for his rights to the Spanish throne against the French-born King , so he was living in . Elisabeth Christine arrived in on July 1708 and married Charles on in . Later, they had two children who survived infancy, Empress Maria Teresa and Archduchess Maria Anna. Elisabeth Christine died in .