Ferdinand II of the Two Sicilies

Ferdinand II of the Two Sicilies 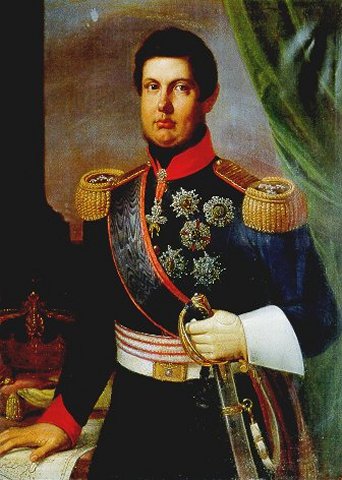 Ferdinand was born in , the son of King and his wife and first cousin .

Ferdinand I and Charles IV were brothers, both sons of and .

In his early years he was fairly popular. Progressives credited with Liberal ideas and in addition, his free and easy manners endeared him to the so-called "", the lower classes of Neapolitan society.

On succeeding to the throne in 1830, he published an edict in which he promised to give his most anxious attention to the impartial administration of justice, to reform the finances, and to use every effort to heal the wounds which had afflicted the Kingdom for so many years. His goal, he said, was to govern his Kingdom in a way that would bring the greatest happiness to the greatest number of his subjects while respecting the rights of his fellow monarchs and those of the . The early years of his reign were comparatively peaceful: he cut taxes and expenditures, had the first railway in Italy built (between and the royal palace at ), his fleet had the first steamship in the , and he had telegraphic connections established between Naples and (Sicily).

However, in 1837 he violently suppressed Sicilian demonstrators demanding a constitution and maintained strict police sureveillance in his domains. Progressive intellectuals, who were motivated by visions of a new society founded upon a modern constitution, continued to demand for the King to grant a constitution and to liberalize his rule.

In September 1847, violent riots inspired by Liberals broke out in and in and were put down by the military. On , a rising in Palermo, Sicily, spread throughout the island and served as a spark for the all over .

After similar revolutionary outbursts in , south of , and in the Cilento region which were backed by the majority of the intelligentsia of the Kingdom, on , King Ferdinand was forced to grant a constitution patterned on the French .

A dispute, however, arose as to the nature of the oath which should be taken by the members of the chamber of deputies. As an agreement could not be reached and the King refused to compromise, riots continued in the streets. Eventually, the King ordered the army to break them and dissolved the national parliament on , . Although the constitution was never formally abrogated, the King returned to reigning as an absolute monarch.

During this period, Ferdinand showed his attachment to by granting him asylum at . The pope had been temporarily forced to flee from Rome following similar revolutionary disturbances. (see , .

Meantime Sicily proclaimed its independence under the leadership of , who on , declared the King deposed. In response, the King assembled an army of 20,000 under the command of General and dispatched it to Sicily to subdue the and restore his authority. A naval flotilla sent to Sicilian waters shelled the city of with "savage barbarity" for eight hours after its defenders had already surrendered, killing many civilians and earning the King the nickname "Re` Bomba" ("King Bomb").

After a campaign lasting close to nine months, Sicily's Liberal regime was completely subdued on ,.

Between 1848 and 1851, the policies of King Ferdinand caused many to go into exile. Meanwhile, an estimated 2,000 suspected revolutionaries or dissidents were jailed.

After visiting Naples in 1850, Gladstone began to support Neapolitan opponents of the Bourbon rulers: his "support" consisting of a couple of letters that he sent from Naples to the Parliament of London, describing the "awful conditions" of the Kingdom of Southern Italy and claiming that "it is the negation of God erected to a system of government". Gladstone had not actually been to Southern Italy and therefore some of his accusations were unreliable, however reports of misgovernment in the Two Sicilies were widespread throughout Europe during the 1850s. Gladstone's letters provoked sensitive reactions in the whole Europe, and helped to cause the diplomatic isolation of the Kingdom prior to the invasion and annexion of the Kingdom of the Two Sicilies by the Kingdom of Piedmont, with the following foundation of modern Italy.

The British Government, which had been the ally and protector of the Bourbon dynasty during the , had already additional interests to limit the independence of the Kingdom governed by Ferdinand II. The British Government possessed extensive business interests in Sicily and relied on Sicilian for certain industries. The King had endeavored to limit British influence, which had been beginning to cause tension. As Ferdinand ignored the advice of the British and the French governments, those powers recalled their ambassadors in 1856.

A soldier attempted to assassinate Ferdinand in 1856 and many believe that the infection he received from the soldier's bayonet led to his ultimate demise. He died on , , shortly after the and the had declared war against the . This would later lead to the invasion of his Kingdom by and in 1861.