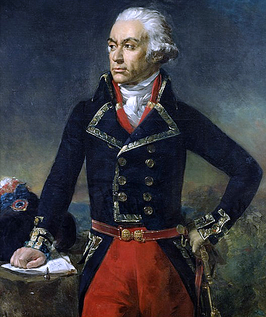 Charles-François du Périer Dumouriez (25 January 1739 – 14 March 1823) was a French general during the French Revolutionary Wars. He shared the victory at Valmy with General François Christophe Kellermann, but later deserted the Revolutionary Army and became a royalist intriguer during the reign of Napoleon.

Dumouriez was born in Cambrai, on the Scheldt River in northern France, to parents of noble rank. Six years earlier, Cambrai was part of the Belgian provinces, and so Dumouriez would always consider himself a Walloon or French-speaking native of Flanders. His father, Antoine-François du Périer, served as a commissary of the royal army, and educated his son most carefully and widely. The boy continued his studies in Paris at the Lycée Louis-le-Grand, and in 1757 began his military career as a volunteer in the campaign of Rossbach. He received a commission for good conduct in action, and served in the later German campaigns of the Seven Years' War with distinction; but at the peace he was retired as a captain, with a small pension and the cross of St Louis.

Dumouriez then visited Italy and Corsica, Spain and Portugal, and his memoranda to the duc de Choiseul on Corsican affairs led to his re-employment on the staff of the French expeditionary corps sent to the island, for which he gained the rank of lieutenant-colonel. In 1767 Choiseul gave Dumouriez a military command as deputy quartermaster general to the Army of Corsica under the Marquis de Chauvelin. After this, he became a member of the Secret du Roi, the secret service under Louis XV, which gave full scope to his diplomatic skills. In 1770 he undertook a mission into Poland to the Confederation of Bar, where, in addition to his political business, he organized a Polish militia for the War of the Bar Confederation. On 23 May, his Polish soldiers were smashed by the Russian forces of General Alexander Suvorov in the Battle of Lanckorona. The fall of Choiseul (1770) brought about his recall. In 1772, upon returning to Paris, Dumouriez sought a military position from the Marquis de Monteynard, the minister of war, who gave him a staff position with the regiment of Lorraine writing diplomatic and military reports. In 1773, he found himself imprisoned in the Bastille, where he spent six months, occupying himself with literary pursuits. He was then removed to Caen, where he remained in detention until the accession of Louis XVI in 1774. Dumouriez was then recalled to Paris and assigned to posts in Lille and Boulogne by the Count de Saint-Germain, the new king’s minister of war.

Upon his release, Dumouriez married his cousin, a certain Mademoiselle de Broissy, but he proved a neglectful and unfaithful husband, and in 1789 the couple separated. Madame Dumouriez took refuge in a convent. In the meantime, Dumouriez had turned his attention to the internal state of his own country, and amongst the very numerous memoranda which he sent to the government was one on the defence of Normandy and its ports, which procured for him in 1778 the post of commandant of Cherbourg, which he administered with much success for ten years. He became a maréchal de camp in 1788, but his ambition was not satisfied.

Career during the Revolution

At the outbreak of the Revolution, seeing the opportunity for carving out a new career, he went to Paris, where he joined the Jacobin Club in 1789. The death of Mirabeau, to whose fortunes he had attached himself, proved a great blow. However, opportunity arose again when, in his capacity as a lieutenant-general and the commandant of Nantes, he offered to march to the assistance of the National Constituent Assembly after the royal family's unsuccessful flight to Varennes.

Minister of War, Louis Lebègue Duportail, promoted Dumouriez from president of the War Council to major-general in June of 1791 and attached him to the Twelfth Division, which was commanded by General Jacques Alexis de Verteuil.

He now attached himself to the Girondist party and, on 15 March 1792, became the French minister of foreign affairs. Dumouriez then selected Pierre LeBrun as his first officer for Belgian and Liégeois affairs. The relationship between the Girondists and Dumouriez was not based on ideology, but rather based on the practical benefit it gave to both parties. Dumouriez needed people in the Convention to support him, and the Girondists needed a general to give them legitimacy in the army.[1] He played a major part in the declaration of war against Austria (20 April), and he planned the invasion of the Low Countries. His foreign policy was greatly influenced by Jean-Louis Favier.[2] Favier had called for France to break its ties with Austria. On the king's dismissal of Roland, Clavière and Servan (13 June 1792), he took Servan’s post of minister of war, but resigned it two days later on account of Louis XVI's refusal to come to terms with the National Constituent Assembly, and went to join the army of Marshal Luckner. After the émeute of 10 August 1792 and Lafayette’s flight, he gained appointment to the command of the "Army of the Centre". At the same moment, France's enemies assumed the offensive. Dumouriez acted promptly. His subordinate Kellermann repulsed the Prussians at Valmy (20 September 1792), and Dumouriez himself severely defeated the Austrians at Jemappes (6 November 1792). After these military victories, Dumouriez was ready to invade Belgium to spread revolution. He was a true revolutionary in the sense that he believed that nations which had undergone a revolution, in this instance France, should give aid to oppressed countries. As his plans were largely limited to Belgium, this tunnel vision sometimes prevented him from acting in the most logical fashion as a commander.[3]

Returning to Paris, Dumouriez encountered popular ovation, but he gained less sympathy from the revolutionary government. His old-fashioned methodical method of conducting war exposed him to the criticism of ardent Jacobins, and a defeat would have meant the end of his career. To the more radical elements in Paris, it became clear that Dumouriez was not a true patriot when he returned to Paris on 1 January 1793 and worked during the trial of Louis XVI to save him from execution. Dumouriez had also written a letter to the Convention scolding it for not supplying his army to his satisfaction and for the Decree of 15 December, which allowed the French armies to loot in the territory they had won. The Decree insured that any plan concerning Belgium would fail due to a lack of popular support among the Belgians. This letter became known as “Dumouriez’s declaration of war”.[1] After a major defeat in the Battle of Neerwinden in March 1793, he made a desperate move to save himself from his radical enemies. Arresting the commissaries of the National Convention who had been sent to inquire into his conduct, he handed them over to the enemy, and then attempted to persuade his troops to march on Paris and overthrow the revolutionary government. The attempt failed, and Dumouriez, along with the duc de Chartres (afterwards King Louis Philippe) and his younger brother, the duc de Montpensier, fled into the Austrian camp. This blow left the Girondists vulnerable due to their association with Dumouriez.

Following his defection in April of 1793, Dumouriez remained in Brussels for a short time, and then traveled to Cologne, seeking a position at the elector’s court. He soon learned he had become an object of suspicion among his countrymen, the royal houses, aristocracies, and clergy of Europe. In response, Dumouriez wrote and published in Hamburg a first volume of memoirs in which he offered his version of the previous year’s events.

Dumouriez now wandered from country to country, occupied in ceaseless royalist intrigues, until 1804 when he settled in England, where the British government granted him a pension. He became a valuable adviser to the British War Office in its struggle against Napoleon, though the extent of his aid only became public many years later. In 1814 and 1815, he endeavoured to procure from Louis XVIII the baton of a marshal of France but failed to do so.