Cherbourg-Octeville is a city and commune in the Manche department in Normandy in north-western France.

Originally just Cherbourg, it was formed when the city absorbed Octeville on 28 February 2000, and was officially renamed Cherbourg-Octeville.

Cherbourg holds an arsenal of the French Navy.

The combined population of Cherbourg and Octeville at the 1999 census was 42,318 inhabitants. (Separately, the official numbers were 25,370 for Cherbourg and 16,948 for Octeville.) The population of Cherbourg metropolitan area (the aire urbaine de Cherbourg) at the 1999 census was 117,855 inhabitants. The city is now the second largest in the Basse-Normandie region (after Caen), surpassing Alençon, which had been second before the amalgamation. Also, the city is the largest in the Manche département, although Saint-Lô is the préfecture (capital).

The Cotentin Peninsula was the first territory conquered by the Vikings and Cherbourg became a port.

During the Seven Years' War the town was briefly occupied by a British force in the Raid on Cherbourg in 1758. The British destroyed military buildings and warehouses before departing.

In the Napoleonic era the harbour was fortified to prevent British naval incursions. Underwater obstructions were sunk at intervals across the harbour entrance, and then progressively replaced with piles of masonried rubble. Works began in 1784 and were not concluded until 1850, long after Napoleon's defeat at the Battle of Waterloo.

On July 31, 1909, tsar Nicholas II and French president Armand Fallières met officially in Cherbourg to reinforce the Franco-Russian Alliance. Cherbourg was the first stop of RMS Titanic after it left Southampton, England.

The Battle of Cherbourg, fought in June 1944 following the Normandy Invasion, ended with the capture of the city on 30 June.

The Norman language writers Alfred Rossel, a native of Cherbourg, composed many songs which form part of the heritage of the region. Rossel's song "Sus la mé" ("on the sea") is often sung as a regional patriotic song. The local dialect is known as Cotentinais.

La Glacerie comes from the French for glass factory. In 1655, Louis Lucas de Néhou built a glass factory which was provided for buildings like Galerie des Glaces and Château de Versailles. The factory in La Glacerie was destroyed by Allied bombardments in 1944.

Cherbourg is at the end of the N13 road from Paris and Caen.

City buses are run by Zephir. 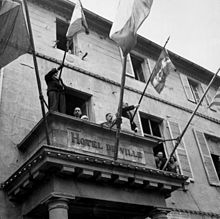 The city's station is at the end of a railway line built by the Chemins de Fer de l'Ouest from Paris. Regular services operate to Paris-Saint-Lazare via Caen using Corail Intercites stock, local TER services operate from the station to Lisieux via Caen and to Rennes via Saint-Lô. As well as a main line station there was also the Gare Maritime Transatlantique station. This now forms part of the Cité de la mer.

Cherbourg-Octeville is a port on the English Channel with a number of regular passenger and freight ferry services operating from the large modern ferry terminal and has a major artificial harbour. The following operators currently run services from the port:

Cherbourg-Octeville has previously had services operated by the following operators:

It should be mentioned that Brittany Ferries to Poole briefly stopped their conventional ferry service in early 2010 but resumed it in February 2011; the seasonal catermaran service continues to run, as does the freight service to the Dorset port. Brittany Ferries have introduced more frequent services from Portsmouth to Cherbourg-Octeville with their latest acquisition, "Cap Finistère" (ex- "Superfast V").

In addition to ferry services, the port also handles cruise ships at the Gare Maritime Transatlantique on the Quai de France next to the Cité de la mer and conventional cargo ships in the eastern area of the docks on the Quai des Flamands and Quai des Mielles.

The nearest airport is in Maupertus-sur-Mer which is named Cherbourg Maupertus.