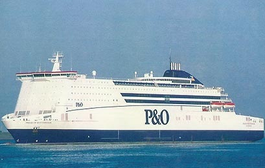 P&O had originally established ferry services in the United Kingdom in the late 1960s with services in the North Sea. In the late 1970s P&O was affected by a reduction in traditional shipping activities which saw the sale of a number of its businessess and assets. This continued into 1985 when it sold its cross channel ferry activities to European Ferries[1], which at the time consisted of services between Dover-Boulogne and Southampton-Le Havre.[2]

In April 2002, P&O announced its intention to purchase Stena Line's 40% share of the joint venture. The purchase was completed by August and in October[3] the Portsmouth and North Sea operations were merged with the Dover operations to create P&O Ferries Ltd in its current form jointly managing all services from its head office, Channel House in Dover.

In September 2004, P&O Ferries Ltd conducted a business review that concluded with the announcement of closure of several of its long term Portsmouth based routes, leaving only the Portsmouth – Bilbao route in operation. These closures were predominantly blamed on the expansion of Low-Cost airlines and the increasing usage of the Channel Tunnel as a faster alternative to ferry operations.[4]

On 15 January 2010, P&O Ferries announced that it would be closing the Portsmouth - Bilbao route by the end of September when its existing charter for the Pride of Bilbao ends. This will mean the closure of the final route served by P&O Ferries in Portsmouth.[5][6]

The MS Pride of Dover and MS Pride of Calais were originally ordered by Townsend Thoresen as purpose-built vessels for the Dover – Calais route. Following the purchase of Townsend Thoresen during construction, they were delivered to P&O European Ferries in 1987 and began operating soon after. They were built by Schichau Unterweser in Bremen-Vegesack, Germany.

MS Pride of Burgundy, MS Pride of Canterbury and MS Pride of Kent were originally ordered as three of four freight vessels for the Dover – Zeebrugge route with the names European Causeway, European Pathway and European Highway respectively. The Pride of Burgundy was converted mid-construction and entered service in 1993. The European Pathway, European Highway and the fourth vessel MS European Seaway were completed and entered service with the Dover – Zeebrugge route.

Following the closure of the Dover – Zeebrugge route in 2002, European Pathway and European Highway returned to their builders and were converted to full passenger mode, eventually re-entering service as the Pride of Canterbury and the Pride of Kent. The fourth vessel, European Seaway was transferred to the Dover – Calais route in early 2005 where she still operates as a freight-only replacement to Pride of Provence.

Two other ships, Pride of Aquitaine and the Pride of Provence were withdrawn from service as part of the review of P&O Ferries operations announced in September 2004.

On 17 December 2007 the Dover fleet was joined by the MS European Endeavour, a new freight ferry to complement the European Seaway. This ship previously saw service at Dover with Norfolkline as the Midnight Merchant. The "European Endeavour" has since been relocated to the companies Liverpool - Dublin route.

It was announced on 8 August 2008 that P&O Ferries had placed a €360 million order with STX Europe for two new ships to replace the Pride of Dover and Pride of Calais. The new ships will be 49,000 gross tonnes and 210 metres in length making them the largest ferries on the English Channel. They will also be the first ships in the world to comply with the new SOLAS "Safe Return to Port" requirements.[7] The first of these new ships MS Spirit of Britain arrived in Dover on 9 January 2011 and the second is scheduled October 2011.[8] The construction of the first vessel began on 3 March 2009 at STX Europe's shipyard in Rauma, Finland.[7]

The Kingston upon Hull to Rotterdam route is taken by P&O's flagships of the ferry fleet, sister ships Pride of Hull and Pride of Rotterdam. Both ships were built in Venice, Italy by Fincantieri's Marghera Shipbuilders, and were delivered to P&O in 2001. Both ships took 14 months to build, have an overall length of 215.1m, a gross tonnage of 59,925t, displacement tonnage of 25,113t and have a service speed of 22 knots. In terms of gross tonnage, these sister ships were the biggest passenger ferries in the world but this title is now held by the 75,100t Color Magic, they are however still the largest passenger ferries to operate from the United Kingdom. Pride of Rotterdam was launched by Queen Beatrix of the Netherlands on April 25, 2001. Pride of Hull was named on November 30, 2001 by the then British Prime Minister's wife Cherie Blair.

The route had begun under Thoresen Car Ferries in 1964 with the revolutionary 'Viking' class fleet of ferries. P&O European Ferries took over in 1987 with two Mark 2 Viking class vessels, Pride of Cherbourg1 and Pride of Winchester and remained in operation until 1994 when they were replaced by the two 'Super Vikings', the Pride of Cherbourg 2 and the Pride of Hampshire which served the route until their eventual replacement by Pride of Cherbourg 3 in September 2002. At the end of the month the Pride of Hampshire was also withdrawn leaving the new Pride of Cherbourg as the only conventional ferry on the route. Many disliked the new timetable offered using the new ship and despite a similar timetable being successfully used by Brittany Ferries Poole-Cherbourg passenger service during the summer for many years it is seen as a contributing factor to the eventual downfall of the route.

The conventional route ran 3 times a day under Townsend Thoresen and later P&O, with two day sailings (morning and mid-afternoon) running 5 hours and one overnight sailing running 8 or 9 hours. From 2002, the new vessel ran twice daily, sailing in the morning (4 hrs 45 mins) and the evening (5 hrs 45 mins), with shorter night sailings as she was faster but had less capacity. On Friday night 'Cabaret Cruises' the Viking class vessels were assisted (since 1993) by the larger Pride of Bilbao, with capacity for 2,500.

Additionally, between 1998 and 2004 a three times daily FastCat service (3 hours) ran between Portsmouth and Cherbourg, which initially began between 1998 and 2000 on Superstar Express, which was chartered from Star Cruises. The highly successful Superstar Express was replaced in 2000 by the larger Incat 91m catamaran Catalonia which was marketed under the name Portsmouth Express. The change to the larger vessel did not go smoothly and the new ship suffered a number of technical problems forcing P&O Portsmouth to recall the Superstar Express for a short time from its new home on the Carinryan-Larne route until the problems were solved. The Portsmouth Express gained a reputation of being unreliable and services were frequently cancelled due to technical problems and the weather but her larger size and long term charter agreement meant she remained on the service for a number of years. For her 2003 season she was painted in standard P&O Ferries livery and her trading name was shortened to "Express" with her official name becoming Catalonia A. In her final season in 2004, the vessel was officially renamed Express but adopted the trading name Cherbourg Express.

Following the announcement of the 2004 P&O Ferries business review, the Portsmouth - Cherbourg fastcat service ceased operation in October 2004 and the ferry route closed in January 2005. It was run solely by P&O's rival company Brittany Ferries until October 2009 when Celtic Link began operating a daily service on the route. This was unsuccessful, and Celtic Link ceased operating the Portsmouth - Cherbourg link in less than a fortnight.

The route began under Thoresen Car Ferries when they decided a second route from their Southampton base was required to meet growing traffic demand. Using the Viking class ferries, they operated a three-times daily service, sailing in the morning and afternoon (5 hours 30 minutes) and one overnight sailing (eight hours). All three vessels used both the Le Havre route and the shorter Cherbourg route.

In 1967 Normandy Ferries opened their route in competition to Townsend Thoresen's, sailing twice daily with one morning and one afternoon sailing (night sailings and cabins were not offered). This now put the two British groups in a three-way competition with French rivals Brittany Ferries. P&O bought out Normandy Ferries becoming P&O Normandy Ferries and maintained its twice daily schedule. By 1985, the three-way competition became a head-to-head struggle with Brittany Ferries after P&O sold their services to Townsend Thoresen. In 1987 P&O returned to the Portsmouth market after purchasing European Ferries Group Ltd.

P&O European Ferries, continued a three-times daily schedule to Le Havre. The need for bigger ships was in high demand especially due to the Vikings' low passenger and vehicle numbers. In 1991 it was decided that the Mark 1 European class freighters (minus European Gateway) should move to back up the freight side. The back-up fleet went down to two in 1993 with the departure of European Clearway to Rosslare. The two remaining Mark 1 European class freighters stayed until the introduction of two German-built vessels, the Pride of Le Havre and the Pride of Portsmouth in 1994.

The demand for bigger ships with higher freight and passenger capacity had now been met.. The two remaining Mark 1 European class freighters moved to Ireland in 1995 to back up Falmouth until January 2006 when they left for their new owners SNAV in Italy. They were renamed SNAV Lazio and SNAV Sardegna respectively and now operate from Civitavecchia to Palermo, in Sicily.

LD Lines now currently operates a two-ship service following the removal of the Norman Voyager and Norman Spirit, from Portsmouth to Le Havre with the high-speed catamaran Norman Arrow and the conventional ferry Cote d'Albatre. 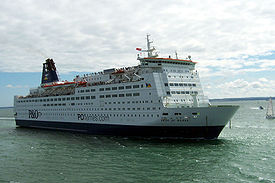 Pride of Bilbao, an archetypical cruiseferry. Built for Viking Line and operated by P&O Ferries between Portsmouth in the UK and Bilbao in Spain from 2002 to 2010

Launched by P&O European Ferries in 1993 the Bilbao route and the Pride of Bilbao continued as they had done in the pre-P&O Portsmouth days. The service operated twice weekly with the Pride of Bilbao running a party cruise to Cherbourg on Friday nights returning on Saturday afternoon. She was also frequently used to cover refits of the Pride of Portsmouth, Pride of Le Havre and Pride of Cherbourg.

The Pride of Bilbao operated P&O Ferries' longest route between Portsmouth and Bilbao. The Pride of Bilbao was often late arriving at its ports due to the unpredictable weather conditions in the Bay of Biscay. The wind has been known to reach Force 12 and recently (in July 2010) she was six hours late due to a force nine gale in the Bay of Biscay.

On 15 January 2010, P&O Ferries announced they will withdraw the service between Portsmouth and Bilbao. The ship will be returned to the Irish Continental Group, from whom it has been used on charter since 1993.[6] After a refit the vessel is being purchased by St Peter Line.

The Pride of Bilbao completed its final voyage for P&O on 28 September 2010. It has now be announced that P&O Ferries rival operator Brittany Ferries will take over this route for the 2011 season.

On September 28, 2004 P&O Ferries made the announcement that it would shut down all its Portsmouth services, except for Portsmouth–Bilbao. The Caen Express was returned to her owner in October 2004 and the Cherbourg Express was sent to P&O Irish Sea. The last crossing of Pride of Cherbourg for P&O was on January 14, 2005. The Le Havre service closed on September 30, 2005.