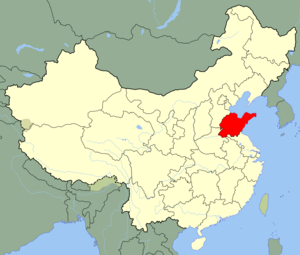 Audio|zh-Shandong.ogg|Shandong (zh-stpw|s=wd|山wd|东|t=wd|山wd|東|p=Shāndōng |w="Shan-tung") is a coastal province of eastern . Its abbreviation is Lǔ, after the that existed here during the .

Shandong's name is literally translated as: "east mountain", which refers to the province's location east of the . [zh [http://www.people.com.cn/GB/shenghuo/1090/2435218.html Origin of the Names of China's Provinces] , .] The province is located in the lower reaches of the (Yellow River) and extends out to sea in the form of the . Shandong borders the to the north, to the northwest, to the west, to the south, and the to the southeast; it also shares a very short border with , between Henan and Jiangsu.

A common nickname for Shandong is "Qílǔ" (齐鲁/齊魯), after the and that existed here during the .

Shandong is located on the eastern edge of the , and felt the influence of Chinese civilization since remote antiquity. The earliest dynasties (the and ) exerted varying degrees of control over western Shandong, while eastern Shandong was inhabited by the Laiyi peoples who were considered as the "s". Over subsequent centuries, the Laiyi were eventually sinicized.

During the Spring and Autumn Period and the Warring States Period, regional states became increasingly powerful. At this time,Shandong was home to two powerful states: the state of Qi at Linzi and the state of Lu at Qufu. Lu is noted for being the home of Confucius. The state was, however, comparatively small, and eventually succumbed to the powerful from the south. The was, on the other hand, a major power throughout this entire period. Cities it ruled included , Jimo (north of modern ) and Ju.

The destroyed Qi and founded the first centralized Chinese state in 221 BC. The that followed created two "zhou" ("provinces") in what is now modern Shandong: in the north and in the south. During the division of the Shandong belonged to the , which ruled over northern China.

In 412, the Chinese Buddhist monk landed at , on the southern edge of the Shandong peninsula, and proceeded to to edit and translate the scriptures he had brought back from .

The reestablished unity in 589, and the (618-907) presided over the next golden age of China. For the earlier part of this period Shandong was ruled as part of , one of the circuits (a political division). Later on China splintered into warlord factions, resulting in the period. Shandong was part of the Five Dynasties, all based in the north.

The reunified China in the late tenth century. In 1996, the discovery of over two hundred buried Buddhist statues at Qingzhou was hailed as a major archaeological find. The statues included early examples of painted figures, and are thought to have been buried due to Emperor Huizong's Song Dynasty repression of (he favoured ).

The Song Dynasty was forced to cede northern China to the Jin Dynasty in 1142. Shandong was administered by the Jin Dynasty as and &mdash; the first use of its current name.

The modern province of Shandong was created by the . It also included much of modern-day (in south ) at the time. However, the s increasingly asserted independence, and managed to conquer all of China in 1644. Under the , which they founded, Shandong acquired (more or less) its current borders.During the nineteenth century, China became increasingly exposed to Western influence, and Shandong, a coastal province, was especially affected. was leased to in 1897 and to Britain in 1898. The rest of Shandong was generally considered to be part of the German . In addition, the opened to immigration during the 19th century; Shandong was the main source of the ensuing tide of migrants.

In 1937 began its invasion of China proper in the , which would eventually become part of the Pacific theatre of the . Shandong was occupied in its entirety by Japan, with resistance in the countryside, and was one of the provinces where operation sankō was implemented by general . This lasted until the surrender of Japan in 1945.

By 1945, communist forces already held some parts of Shandong. Over the next four years of the , they expanded their holdings, eventually driving the (government of the ) entirely out of Shandong by June 1949. The was founded in October of the same year.

In recent years Shandong, especially eastern Shandong, has raced ahead in economic development, becoming one of the richest provinces of the People's Republic of China.

The passes through Shandong's western areas, entering the sea along Shandong's northern coast; in its traversal of Shandong it flows on a , higher than the surrounding land, and dividing western Shandong into the watershed in the north and the watershed in the south. The enters Shandong from the northwest and leaves on the southwest. is the largest lake of the province. Shandong's coastline is 3000 km long. has a rocky coastline with cliffs, bays, and islands; the large , the southernmost of the three bays of , is found to the north, between and Penglai; , which is much smaller, is found to the south, next to . The extend northwards from the northern coast of the peninsula.

The politics of Shandong is structured in a dual party-government system like all other governing institutions in mainland China.

The is the highest ranking official in the People's Government of Shandong. However, in the province's dual party-government governing system, the Governor has less power than the Shandong Provincial Committee Secretary, colloquially termed the "Shandong ".

Shandong ranks first among the provinces in the production of a variety of products, including and as well as precious metals such as and s. Other importants crop include and . Shandong has extensive deposits as well, especially in the area in the delta, where the (lit. Victory Oilfield) is one of the major oilfields of China. Shandong also produces from underground wells and salt from sea water.

Shandong is one of the richer provinces of China, and its economic development focuses on large enterprises with well-known brand names. Shandong has also benefited from n and ese investment, due to its geographical proximity to those countries. The richest part of the province is the , where the city of is home to two of the most well-known brand names of China: Tsingtao and . In addition, 's oil fields and petroleum industries form an important component of Shandong's economy. On the other hand, the extreme inland west of Shandong is much poorer than the rest of the province.

Shandong is the second most populous province of China, after , with a population of almost 92 million. Over 99% of Shandong's population is . Minority groups include the Hui and the s. Shandong is also known as having highest average height of any Chinese province.

Shandong is divided into seventeen prefecture-level divisions, all of them :

(鲁菜) is one of the eight great traditions of . It can be more finely divided into inland Shandong cuisine (e.g. ); the -centered in the peninsula; and , an elaborate tradition originally intended for imperial and other important feasts.

and are popular types of in Shandong; both originated from southwestern Shandong.

The (-) and (-) are both major arterial railways that pass through the western part of Shandong. The Jingjiu passes through and ; the Jinghu passes through , , , . and . The is an important railway of Shandong, linking its two largest cities of and , with the longest history of all.

Shandong has one of the densest and highest quality expressway networks among all Chinese provinces. At over 3000 km, the total length of Shandong's expressways is the highest among the provinces. The (-) and (-, passing through Shandong) are all important arterial expressways.

The , with its bays and harbours, has many important ports, including , , , , and . Many of these ports have historical significance as well, as the sites of former foreign naval bases or historical battles. Ferries link the cities on the north coast of the peninsula with the , further north across the sea.

Important airports include and .

Tourist attractions in Shandong include:
* Penglai, a town on the north of the Shandong peninsula famed in .
* , beach resort city on the south of the peninsula famous for its Tsingtao
** , a scenic area and ist centre to the east of Qingdao.
* , an ancient trading and administrative centre with some famous archaeological discoveries.
* , a former British port city important in the .
* :
** Temple and Cemetery of , and the Kong Family Mansion in
** , sacred mountain, in