Joséphine de Beauharnais (pronounced: [ʒo.ze.fin də‿bo.aʁ.nɛ]; 23 June 1763 – 29 May 1814) was the first wife of Napoléon Bonaparte, and thus the first Empress of the French. Her first husband Alexandre de Beauharnais had been guillotined during the Reign of Terror, and she had been imprisoned in the Carmes prison until her release five days after Alexandre's execution.

She did not bear Napoleon any children; as a result, he divorced her in 1810 to marry Marie Louise of Austria.

Joséphine was the recipient of numerous love letters written by Napoleon, many of which still exist. Her chateau of Malmaison was noted for its magnificent rose garden, which she supervised closely, owing to her passionate interest in roses, which she collected from all over the world.

The family struggled financially after hurricanes destroyed their estate in 1766. Edmée (Desirée for the french), Joséphine's paternal aunt, had been the mistress of François, Vicomte de Beauharnais, a French aristocrat. When François's health began to fail, Edmée arranged the advantageous marriage of her niece, Catherine-Désirée, to François's son Alexandre. This marriage would be highly beneficial for the Tascher family, because it would keep the Beauharnais money in their hands; however, twelve-year old Catherine died on 16 October 1777, before leaving Martinique for France. In service to their aunt Edmée's goals, Catherine was replaced by her older sister, Joséphine.

In October 1779, Joséphine went to France with her father. She married Alexandre on 13 December 1779, in Noisy-le-Grand. Although their marriage was not happy, they had two children: a son, Eugène de Beauharnais (1781–1824), and a daughter, Hortense de Beauharnais (1783–1837), who married Napoléon's brother Louis Bonaparte in 1802.

On 2 March 1794, during the Reign of Terror, the Comité de Salut public ordered the arrest of her husband. He was jailed in the Carmes prison in Paris. Considering Joséphine as too close to the counter-revolutionary financial circles, the Committee ordered her arrest on 19 April 1794. A warrant of arrest was issued against her on 2 Floréal, year II (21 April 1794), and she was imprisoned in the Carmes prison until 10 Thermidor, year II (28 July 1794). Her husband was accused of having poorly defended Mainz in July 1793, and considered an aristocratic "suspect", was sentenced to death and guillotined, with his cousin Augustin, on 23 July 1794, on the Place de la Révolution (today's Place de la Concorde) in Paris. Joséphine was freed five days later, thanks to the fall and execution of Robespierre, which ended the Reign of Terror. On 27 July 1794 (9 Thermidor), Tallien arranged the liberation of Thérèse Cabarrus, and soon after that of Joséphine.

In June 1795, a new law allowed her to recover the possessions of Alexandre. 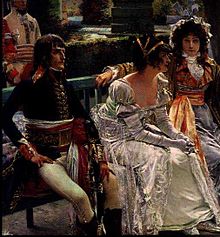 Joséphine de Beauharnais, now a widow, became the mistress of several leading political figures, including Paul François Jean Nicolas Barras. In 1795, she met General Napoléon Bonaparte, six years her junior, and became his mistress. In a letter to her in December, he wrote, "I awake full of you. Your image and the memory of last night’s intoxicating pleasures has left no rest to my senses." Biographer Carolly Erickson wrote, “In choosing her lovers Rose [Josephine] followed her head first, then her heart”, [1] meaning that she was adept in terms of identifying the men who were most capable of fulfilling her financial and social needs. She was not unaware of Napoleon's potential. Joséphine was a renowned spendthrift and Barras may have encouraged the relationship with Général Bonaparte in order to get her off his hands.

Joséphine was described as being of average height, svelte, shapely, with silky, chestnut-brown hair, hazel eyes, and a rather sallow complexion. Her nose was small and straight, and her mouth was well-formed; however she kept it closed most of the time so as not to reveal her bad teeth.[2] She was praised for her elegance, style, and low, "silvery", beautifully-modulated voice.[3] 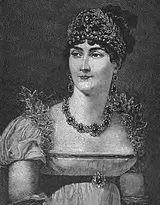 In January 1796, Napoléon Bonaparte proposed to her and they married on 9 March. Until meeting Bonaparte, she was known as Rose, but Bonaparte preferred to call her Joséphine, the name she adopted from then on. Two days after the wedding, Bonaparte left to lead the French army in Italy, and during their separation, sent her many love letters. In February 1797, he wrote: “You to whom nature has given spirit, sweetness, and beauty, you who alone can move and rule my heart, you who know all too well the absolute empire you exercise over it!”[4] Many of his letters are still intact today, while very few of hers have been found; it is not known whether this is due to their having been lost or to their initial scarcity.

In the meantime, Joséphine, left behind in Paris, began an affair in 1796 with a handsome Hussar lieutenant, Hippolyte Charles.[5] The rumours that reached Bonaparte so infuriated him[6] that his love for her changed entirely.[6]

The marriage was not well-received by the members of Napoléon's family, who were shocked that he had married a widow with two children. His mother and sisters were especially resentful of Joséphine as they felt clumsy and unsophisticated in her presence.[7]

During the Egyptian campaign of 1798, Napoléon Bonaparte started an affair of his own with Pauline Bellisle Foures, the wife of a junior officer who became known as "Napoleon's Cleopatra." The relationship between Joséphine and Napoléon was never the same[citation needed] after this. His letters became less loving. No subsequent lovers of Joséphine are recorded, but Napoléon continued to have sexual affairs with other women. In 1804, he said, "Power is my mistress."[citation needed]

On 24 December 1800, Joséphine was caught up in an attempt on Napoleon's life. She was travelling in the second of two carriages on the way to the Opéra alongside her daughter, Hortense, pregnant sister-in-law, Caroline Murat, and General Rapp. They were to see a performance of Josef Haydn's Creation.[8] Napoléon had already gone on ahead in the first carriage as Joséphine had held up the group on account of her unfamiliary with the draping of a new silk shawl.[9] Her carriage was approaching an explosive device known as the "Machine infernale", which was hidden in a wine cask and placed in a cart attached to a mare, when it exploded, killing several bystanders and damaging nearby houses. The blast killed one of the horses, blew out the carriage's windows, and Hortense was struck in the hand by flying glass. Otherwise, there were no further injuries and the party proceeded to the Opéra as planned.[10]

Empress of the French 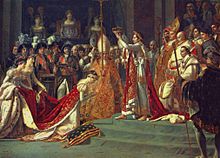 Joséphine kneels before Napoléon during his coronation at Notre Dame. Detail from the oil painting (1806-7) by David and Rouget

Divorce letter from Joséphine to Napoléon, 1809

In 1804, Napoleon used the various plots against his life to justify the re-creation of a hereditary monarchy in France with himself as Emperor Napoléon I, which would make Joséphine Empress of the French.

Shortly before their coronation, there was an incident at the Château de Saint-Cloud that nearly sundered the marriage between the two. Joséphine caught Napoléon in the bedroom of her lady-in-waiting, Elisabeth de Vaudey, and Napoléon threatened to divorce her as she had not produced an heir. Eventually, however, through the efforts of her daughter Hortense, the two were reconciled.

When, after a few years, it became clear she could not have a child, Joséphine agreed to a divorce so the Emperor could remarry in the hope of having an heir. The divorce took place on 10 January 1810. On 11 March, Napoléon married Marie-Louise of Austria by proxy; the formal ceremony took place at the Louvre on 1 April. Napoléon once remarked after marrying Marie-Louise that "he had married a womb." 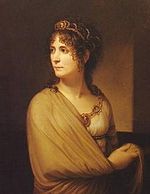 Portrait of Joséphine by Andrea Appiani 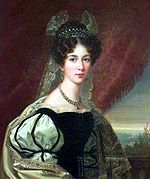 Statue of Joséphine in the park of Bois-Préau castle, part of the Malmaison estate.

After the divorce, Joséphine lived at the Château de Malmaison, near Paris. She remained on good terms with Napoléon, who once said that the only thing to come between them was her debts.

Joséphine died of pneumonia in Rueil-Malmaison, four days after catching cold during a walk with Tsar Alexander in the gardens of Malmaison. She was buried in the nearby church of Saint Pierre-Saint Paul in Rueil. Her daughter Hortense is interred near her.

Napoléon claimed to a friend, while in exile on Saint Helena, that "I truly loved my Joséphine, but I did not respect her."[11] Despite his numerous affairs, eventual divorce, and remarriage, the Emperor's last words on his death bed at St. Helena were: "France, the Army, the Head of the Army, Joséphine."

Hortense's son became Napoléon III, Emperor of the French. Eugène's daughter Joséphine, married King Oscar I of Sweden, the son of Napoléon's one-time fiancée, Désirée Clary. Through her, Joséphine is a direct ancestor of the present heads of the royal houses of Belgium, Denmark, Greece, Luxembourg, Norway and Sweden. Another of Eugène's daughters, Amélie de Beauharnais von Leuchtenberg, married Emperor Pedro I of Brazil (also former king Pedro IV of Portugal) in Rio de Janeiro, and became Empress of Brazil, and they had one surviving daughter.

In 1799 while Napoleon was in Egypt, Josephine purchased the Chateau de Malmaison.[12] She had it landscaped in an “English” style, hiring landscapers and horticulturalists from the United Kingdom. These included: Thomas Blaikie, a Scottish horticultural expert, another Scottish gardener, Alexander Howatson, the botanist, Ventenat, and the horticulturist, Andre Dupont. The rose garden was begun soon after purchase; inspired by Dupont’s love of roses. Josephine took a personal interest in the gardens and the roses, and learned a great deal about botany and horticulture from her staff. Josephine wanted to collect all known roses so Napoleon ordered his warship commanders to search all seized vessels for plants to be forwarded to Malmaison. Pierre-Joseph Redoute was commissioned by her to paint the flowers from her gardens. Les Roses was published 1817-20 with 168 plates of roses, 75-80 of which grew at Malmaison. The English nurseryman Kennedy was a major supplier, despite England and France being at war, his shipments were allowed to cross blockades. Specifically, when Hume’s Blush Tea-Scented China was imported to England from China, the British and French Admiralties made arrangements in 1810 for specimens to cross naval blockades for Josephine’s garden.[13] Sir John Banks, Director of the Royal Botanical Gardens, Kew, also sent her roses. The general assumption is that she had about 250 roses in her garden when she died in 1814. Unfortunately the roses were not catalogued during her tenure. There may have only been 197 rose varieties in existence in 1814, according to calculations by Jules Gravereaux of Roseraie de l’Haye. There were 12 species, about 40 centifolias, mosses and damasks, 20 Bengals, and about 100 gallicas. The botanist Claude Antoine Thory, who wrote the descriptions for Redoute’s paintings in Les Roses, noted that Josephine’s Bengal rose R. indica had black spots on it.[14] She produced the first written history of the cultivation of roses.

Modern hybridization of roses through artificial, controlled pollination began with Josephine’s horticulturalist Andre Dupont.[12] Prior to this, most new rose cultivars were spontaneous mutations or accidental, bee-induced hybrids, and appeared rarely. With controlled pollination, the appearance of new cultivars grew exponentially. Of the roughly 200 types of roses known to Josephine, Dupont had created 25 while in her employ. Subsequent French hybridizers created over 1000 new rose cultivars in the 30 years following Josephine's death. In 1910, less than 100 years after her death, there were about 8000 rose types in Gravereaux's garden. Bechtel also feels that the popularity of roses as garden plants was boosted by Josephine’s patronage. She was a popular ruler and fashionable people copied her. Brenner and Scanniello call her the "Godmother of modern rosomaniacs" and attribute her with our modern style of vernacular cultivar names as opposed to latinized, pseudo-scientific cultivar names. For instance, R. alba incarnata became ‘Cuisse de Nymphe Emue’ in her garden. After Josephine’s death in 1814 the house was vacant at times, the garden and house ransacked and vandalised, and the garden’s remains were destroyed in a battle in 1870.

The rose ‘Souvenir de la Malmaison’ appeared in 1844, 30 years after her death, named in her honor by a Russian Grand Duke planting one of the first specimens in the Imperial Garden in St. Petersburg.[14]