This is the correct spelling of the surname in modern Polish; various other spellings are also used in English and French.

Marie Leszczyńska (Trzebnica, 23 June 1703 – Versailles, 24 June 1768) was a queen consort of France. She was a daughter of King Stanisław Leszczyński of Poland (later Duke of Lorraine) and Catherine Opalińska. She married King Louis XV of France and was the grandmother of Louis XVI, Louis XVIII, and Charles X. In France, she was referred to as Marie Leczinska. She was the longest serving Queen consort of France.

Maria Karolina Zofia Felicja Leszczyńska h. Wieniawa[1] was the second daughter of Stanisław Leszczyński and his wife Katarzyna Opalińska. Her older sister Anna Leszczyńska (1699–1717) died at the age of 18 of pneumonia.

Maria's early life was troubled by her father's political misfortune. Ironically, King Stanisław's hopeless political career was eventually the reason why his daughter Maria was chosen as the bride of King Louis XV of France. Devoid of political connections, his daughter was viewed by the French as being free from the burden of international alliances.[citation needed]

She was born in Trzebnica, Lower Silesia, the year before her father was made King of Poland by Charles XII of Sweden who had invaded the country that year. She would be brought up as a fugitive princess living for a while in Stockholm, (Sweden).

Very close to her father, Maria shared his exile in Wissembourg in the French province of Alsace, a place suggested by Philippe II, Duke of Orléans, a nephew of Louis XIV and Regent of the Kingdom of France during Louis XV's minority.

The family was supported by a pension from the Régent and, while living in Wissembourg, Maria was asked for her hand in marriage by Louis Henri de Bourbon, Prince of Condé, who became Louis XV's prime minister at the death of the Regent in December 1723. That same year, the young king fell ill and, fearing the consequences of the unmarried king dying without an heir, the prime minister suggested marrying the young king. 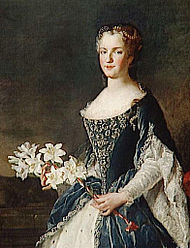 Arms of Marie as queen of France

Maria was on a list of 99 eligible European princesses to marry the young king.

Cardinal Fleury, who wanted for the king a royal bride who would not drag France into any complicated political alliances, supported the marriage. One aspect in the choice of Marie was the fact that she was old enough to have children, while the former designated bride, the Infanta Mariana Victoria of Spain, was too young to bear children.

The marriage by proxy took place on 15 August 1725 in the cathedral of Strasbourg, Louis XV being represented by his cousin the Duke of Orléans, Louis le Pieux.

Louis and Marie first met on the eve of their wedding, which took place on 5 September 1725, at the Château de Fontainebleau. Marie was twenty-two years old and Louis fifteen. The young couple was reported to have fallen in love at first sight.[citation needed].

The announcement of the wedding was not received well as the royal court, who considered the match to be a misalliance, as the father of Marie had been a monarch for such a short time. There were rumours before the wedding that the bride was ugly, epileptic and sterile.[citation needed] However, Marie earned popularity among the population from the beginning, when she handed out money on her way to her wedding in Fontainebleau.

Cardinal de Fleury, who had been Louis' tutor, was appointed Grand Chaplain to Marie[citation needed].

Upon her marriage, Maria's Polish name was modified into French as Marie Leczinska.

The young couple's marriage was initially happy. In August 1727, Maria gave birth to her first children, twin daughters named Louise Élisabeth de France and Henriette Anne de France, at the Palace of Versailles. The elder twin, Louise Élisabeth, later married the Infante Felipe of Spain and eventually became the Duchess Consort of Parma. Through Louise Élisabeth, Marie became an ancestor of Juan Carlos I of Spain.

After the difficult birth of Louise Marie de France, in 1737, which nearly took her life[citation needed], she had no more children. In 1738, she refused Louis entrance to her bedroom, and after this, their private relationship ended, though the formal marriage continued in spite of her husband's infidelities.

Louis XV was a notorious womaniser. Several of his mistresses, particularly Madame de Pompadour, who was introduced at the court of Versailles in 1745 on the occasion of the marriage of the Dauphin Louis, eventually eclipsed the Queen's social status. Most of her husband's romantic affairs were with her knowledge, and she either simply accepted them, or was powerless to stop them[citation needed], and throughout, she displayed an attitude of discretion and dignity. She upheld a relatively good relationship toward Madame de Pompadour.[citation needed]

Marie had a very close relationship to her children. 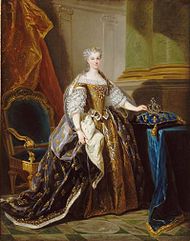 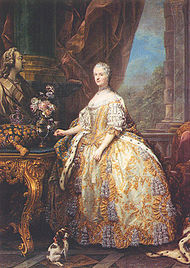 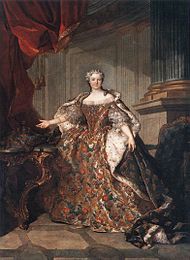 Marie Leszczynska in formal attire as the Queen of France.

On 5 September 1725, she married Louis XV of France. They had eleven children:

Queen Marie never managed to acquire any political influence. She made an attempt to involve in politics at the very beginning of their marriage when she, in 1726, asked Louis to appoint the unpopular Duke of Bourbon as minister of Cabinet, despite her father's warnings. King Louis took her attempt to involve in politics very badly, and after 1726 she was completely separated from the affairs of State and any political influence on Louis. In 1733, she declared her father her support in his demand on the Polish throne as a private person.

Queen Marie represented the King many times in ceremonial rituals at the court of Versailles during his many absences from such matters.

Louis provided her with a large apartment in the palace where she could live more informally with her circle of friends. Among her most noted guests were the de Luynes couple.

She was given an allowance of 96,000 livres for pleasure, charity and gambling, which was not considered to be very large. She enjoyed a game called cavagnole, and was often in debt because of the reluctance of her husband and father to pay her debts.

Marie was a devout Roman Catholic. Her major contribution to life at Versailles was the weekly event of Polish choral concerts. She was also a great lover of music and painting and the protector of many artists. She met the castrato Farinelli in 1737, and, in 1764, the young Mozart whom she found very charming, and she acted as an interpreter for her husband and family who did not understand German. She also started a correspondence with Voltaire, for whom she secured a pension.

During an era when France was a very powerful nation, often in conflict with Austria, the Austrian ambassador to France, comte de Mercy-Argenteau (who later helped secure the marriage of the Dauphin and Marie Antoinette) was said to have been romantically involved with the queen; this seems highly unlikely and was disregarded as court gossip. Marie was known for her good manners, grace and her piety.

Her daughter-in-law, the dauphine, died at the age of 20 after giving birth to a daughter Marie Thérèse de France, Madame Royale. The Queen, very fond and loving of her only son, encouraged him to take as his second wife Duchess Marie-Josèphe of Saxony the daughter of her father's rival, Frederick Augustus Wettin of Saxony, King August III of Poland. Initially, this connection caused some friction between the Queen and her new daughter-in-law. However, the friction was soon overcome, reportedly because the young German princess was an admirer of the Queen's father. In honour of him, several of the Queen's grandsons received the name Stanislas at their christening.

Marie died at Versailles on 24 June 1768, six years before her husband. Her family sincerely grieved her death. She was buried at the Basilica of St Denis, and her heart was deposed at the church of Church of Notre-Dame-de-Bonsecours in Nancy (Lorraine).