Queen Claude was named after St. Claude, a saint her mother had invoked during a pilgrimage so she could give birth to a living child.

Because her mother, Anne, Duchess of Brittany, had no surviving sons, Claude became heiress to the Duchy of Brittany. The crown of France, however, could pass only to and through male heirs, according to Salic Law. In 1504, Anne, eager to keep Brittany separate from the French crown, effected the Treaty of Blois, which promised Claude's hand in marriage to the future Holy Roman Emperor Charles V with the promise of Brittany and the Duchy of Burgundy. The prospect of a reduced France surrounded on several sides was unacceptable to the Valois, and so the betrothal was soon canceled.

The French nobles argued against a betrothal to a foreigner, urging Louis XII to marry Claude to her cousin Francis, Duke of Angoulême, "who is at least all French", and was also the heir-presumptive to the French crown. In 1506, the child was betrothed to Francis. In 1514, when her mother died, Claude became Duchess of Brittany; and on 18 May 1514, at Saint-Germain-en-Laye, she married Francis.

Claude, the pawn of so much dynastic maneuvering, was short in stature and afflicted with scoliosis, which gave her a hunched back. She was eclipsed at court by her mother-in-law, Louise of Savoy, and her sister-in-law, the literary Marguerite, Queen consort of Navarre.

When Francis became King in 1515, two of Claude's ladies-in-waiting were the English sisters Mary and Anne Boleyn, and another was Diane de Poitiers. Mary became the king's mistress before returning home in about 1519. Anne served as Claude's official translator whenever there were English visitors, such as in 1520. Anne was also a temporary companion to Claude's younger sister, Renée. Anne Boleyn returned to England in 1521, where she eventually became Queen of England as the second wife of Henry VIII. Diane de Poitiers was a principal inspiration of the School of Fontainebleau of the French Renaissance, and became the lifelong mistress of Francis's son and successor, Henry II.

Claude's life was spent in an endless round of annual pregnancies. Her husband had many mistresses, but was usually relatively discreet. Claude imposed a strict moral code on her own household, which only a few chose to flout. 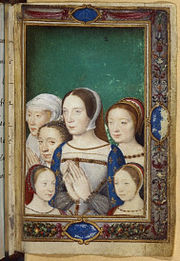 Claude and Francis I had seven children:

Claude died in 1524, when she was only twenty-four. She was initially succeeded as ruler of Brittany by her eldest son, the Dauphin Francis, who became Duke Francis III, with Claude's widower King Francis I as guardian. After the Dauphin's death in 1536, Claude's second son, Henry, Duke of Orleans, became Dauphin and Duke of Brittany. He later became King of France as Henry II.

Claude's widowed husband himself remarried several years after Claude's death, to Eleanor of Austria, the sister of Emperor Charles V. The atmosphere at court became considerably more debauched, and there were rumours that King Francis's death in 1547 was due to syphilis.

The prayer book of Claude of France, is a tiny, jewel-like manuscript that was made for Claude around 1517, the year she was crowned queen of France. Her coat of arms appears on three different folios. The book is richly illustrated: the borders of each leaf are painted, front and back, with 132 scenes from the lives of Christ, the Virgin Mary, and numerous saints. The manuscript and a companion Book of Hours also made for the queen (in a Paris private collection) were illuminated by an artist who was given the nickname Master of Claude de France after these two volumes. It was donated to The Morgan Library & Museum in New York City in 2008 by Mrs. Alexandre Paul Rosenberg in memory of her husband.[2]

Claude is remembered in a classic small plum, the size of a walnut, pale green with a glaucous bloom. It is still called "Reine Claude" (literally, "Queen Claude") in France and is known in England as a "greengage".

Queen Claude of France is played by Gabriella Wright in season one of the Showtime series The Tudors.
"Kind Queen Claude" is a major character in Robin Maxwell's Mademoiselle Boleyn.