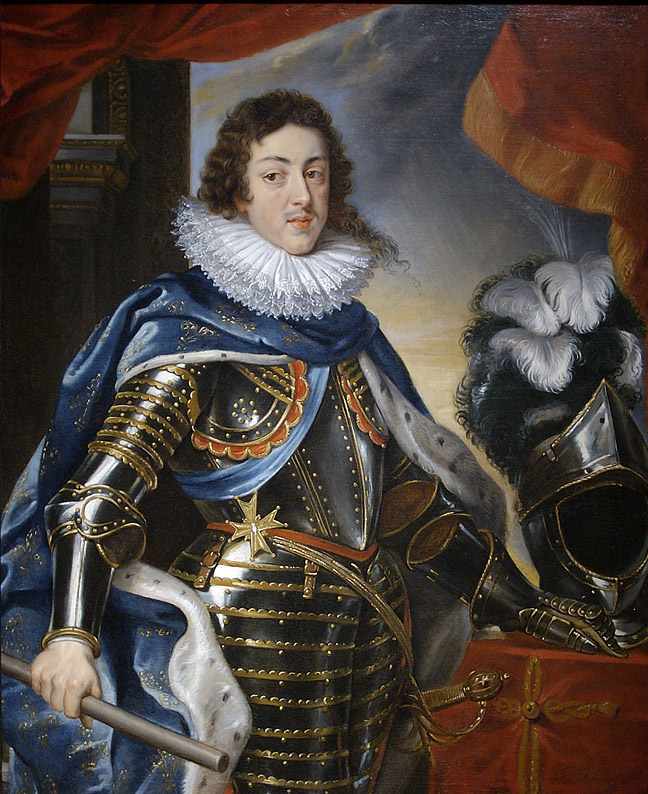 Born at the , Louis XIII was the eldest of (1589–1610) and . As the eldest son of the king, he was a . His father was the first Bourbon King of France, having succeeded his ninth cousin, (1574–89), in application of . Louis XIII's paternal grandparents were and , Queen of Navarre; his maternal grandparents were and , and , his maternal aunt, was his [cite book |title=Painters and Their Works |url=http://books.google.com/books?id=LoSQhHjfwpoC&printsec=titlepage&dq=#PPP1,M1 |last=James |first=Ralph N. |year=1897 |publisher= |location= |asin=B000Z6GQ0C |pages=421 ]

Louis XIII ascended to the throne in 1610, at the age of eight and a half, upon the of his father. His mother acted as until Louis XIII came of age at thirteen, but she clung to power unofficially until he took the reins of government in frustration at the age of fifteen. The assassination of (April 24, 1617), who had greatly influenced Marie's policymaking, and Marie's exile to Blois, removed her from power. Louis then came into his own as ruler of . He filled his court with loyal friends and sidelined those who remained loyal to his mother. Under Louis XIII's rule, the Bourbon Dynasty sustained itself effectively on the throne that Henry IV had recently secured; but the question of continued to haunt the country.

Cardinal Richelieu played a major role in Louis XIII's administration from 1624, decisively shaping the destiny of France for the next 18 years. As a result of Richelieu's work, Louis XIII became one of the first exemplars of an absolute monarch. Under Louis XIII the s were humiliatedFact|date=September 2008Clarifyme|date=September 2008, the French nobility was firmly kept in line behind their King, and the political and military privileges granted to the s by his father were retracted (while their religious freedoms were maintained). Furthermore, Louis XIII had the port of modernized and built a powerful navy. Unfortunately time and circumstances never permitted King and Cardinal to attend to the administrative reforms (particularly of France's tax system) which were urgently needed. 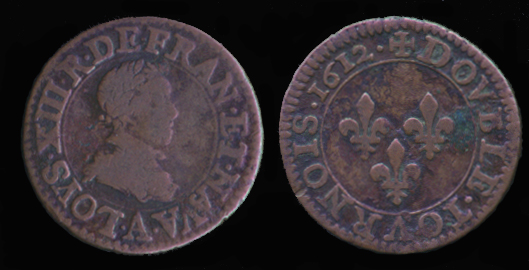 The King also worked to reverse the trend of promising French artists leaving for to work and study. Louis XIII commissioned the artists and to decorate the . In foreign matters, Louis XIII organized the development and administration of , expanding the settlement of westward along the from to .

On , , aged only 14, Louis XIII was married to a Habsburg Princess, (1601–66), daughter of King (1578–1621). This marriage followed a tradition of cementing military and political alliances between the Catholic powers of France and Spain with royal marriages. The tradition went back to the marriage of King with the French princess, Élisabeth de Valois, the daughter of King , in 1559 as part of the . Their sexual relationship did not begin (other than the consummation of the wedding) until 1619 (when he was 18) [ citation needed ] . The marriage, like many Bourbon-Habsburg relationships, was only briefly happy, and the King's duties often kept them apart. After 23 years of marriage and four miscarriages, Anne finally gave birth to a son in 1638.

There is no evidence whether Louis had mistresses (consequently earning the tile of 'Louis the '), but persistent rumours insinuated that the King may have been or at least . Tallemant des Réaux, in his "Historiettes", gives quite explicit (but inevitably second-hand) descriptions of what happened in the king's bed. ["The King gave his first sign of affection for anybody in the person of his coachman, Saint-Amour. After that he showed feelings for Haran, the keeper of his dogs."] A with an , Francois de Baradas, ended when the latter lost favour fighting a duel after duelling had been forbidden by royal decree. [Louis Cromption, "Homosexuality and Civilization", London, 1991. The grandson of Henry III, Saint-Luc, penned the irreverent rhyme: 'Become a bugger, Baradas / if you are not already one / like Maugiron my grandfather / and La Valette'.]

Though Richelieu was firmly in charge of French policies, the King's favourites left their mark on reign. The first was the Duc de Luynes, 23 years his senior, who was the boy's closest adult friend and adviser at the outset of his reign. The last of the King's favorites (1639–42) was the much younger Marquis de Cinq-Mars, who was executed for conspiring with the Spanish enemy in time of war. The spoiled young aristocrat was beautiful and splendidly dressed, and the gloomy king was captivated and rejuvenated by the dashing youth. Louis' letters to Richelieu are filled with anguished complaints about the distress their lover's quarrels caused him. Tallemant describes how on a royal journey, the king "sent M. le Grand to undress, who returned, adorned like a bride. 'To bed, to bed' he said to him impatiently... and the mignon was not in before the king was already kissing his hands." Cinq Mars, who was himself an ardent womaniser, merely tolerated these passionate attentions. [Louis Cromption, "Homosexuality and Civilization", London, 1991]

On , Louis XIII married ( – ). They were childless for almost twenty-three years and had nearly lost hope when the heir to the throne, the future , was born. Many regarded this birth as a divine miracle and, in show of gratitude to God for the long-awaited birth of an heir, his parents named him Louis-"Dieudonné" (“God-given”). As another sign of gratitude, according to several interpretations, seven months before his birth, France was dedicated by his father, , to the , who, many believed, had interceded for the perceived miracle. [ [http://www.nd-de-graces.com/history/brother_fiacre.htm Our Lady of Graces and the birth of Louis XIV] The website of the [http://www.nd-de-graces.com/accueil.php Sanctuary of Our Lady at Cotignac, Provence] . Retrieved on 2008-01-24] [. [http://books.google.com/books?id=cWEaAAAAMAAJ&pg=PA381 "La Provence mystique au XVIIe siècle"] . : Plon-Nourrit, 1908. p. 381. "Sans l'assurance d'avoir un fils, Louis XIII n'aurait pas fait le voeu de 1638." Translation: "Without the assurance of having a son, Louis XIII would not have made the vow of 1638."] [cite web|url=http://encarta.msn.com/encyclopedia_761572792/Louis_XIV.html|title=Louis XIV|publisher=MSN Encata|date=2008|accessdate=2008-01-20] However, the text of the dedication does not mention the royal pregnancy and birth as one of its reasons. Also, Louis XIII himself is said to have expressed his skepticism with regards to the miracle after his son's birth. [Claude Dulong. "Anne d’Autriche". : Hachette, 1980. "Irrité de voir tant de courtisans parler de "miracle", Louis XIII aurait répliqué que "ce n'était point là si grand miracle qu'un mari couchât avec sa femme et lui fasse un enfant." Translation: "Irritated to see so many courtiers speak of a “miracle”, Louis XIII is said to have replied: “it was not such a great miracle that a husband slept with his wife and made her a child.”"]

The couple had the following children:

Louis XIII in fiction and film

* , his wife , and Cardinal Richelieu all became central figures in Alexandre Dumas, "père"'s novel, "" and subsequent film adaptations. The book depicts Louis as a man willing to have Richelieu as a powerful advisor but aware of his scheming; he is depicted as a bored and sour man, dwarfed by Richelieu's competence and intellect. Films such as George Sidney's or Richard Lester's tend to treat Louis XIII as comical character by depicting him as bumbling and incompetent.
* Louis XIII, his wife Anne, Cardinal Richelieu, Cardinal Mazarin and members of the royal family are mentioned throughout the course of the .
* Louis XIII also appears in novels of 's "Fortune de France" series.
* directed the film "The Devils", in which Louis XIII is a significant character, one with no resemblance to the real man. Louis XIII is portrayed as an effeminate who amuses himself by dressed up as birds. The film was based on 's book "".
* Louis XIII also appears in the "" audio drama "".