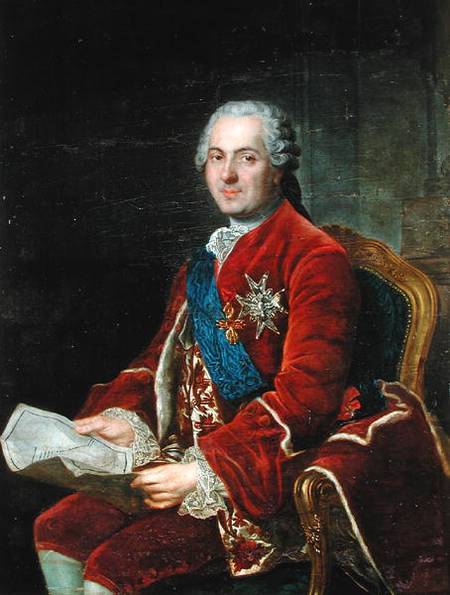 Louis Ferdinand [He is called simply "Louis" by the most reputed biographies (including the earliest ones by Proyart and Rozoir), the major genealogical works about the House of Bourbon (including Achaintre and Dussieux) and numerous engravings. Several modern works (e.g. Antonia Fraser "Marie Antoinette") and some websites call him "Louis Ferdinand" to distinguish him from his father and his two sons.] , Dauphin of France ) ( &ndash; ), was the eldest and only surviving son of King and his wife, Queen . As the son of the king, he was a . He was the father of three kings of France, Louis XVI, Louis XVIII and Charles X.

Louis was born at the . The birth of an heir to the throne had long been awaited since the tragic decimation of the French royal family in the early 1710s (see ). When the fourth pregnancy of Marie Leszczyńska resulted in a son in 1729, there was popular rejoicing. In all the major cities of France there were fireworks (many memorialized in engravings).

At Rome and other European courts there were also celebrations, since Louis' birth ensured the French succession. As the to the throne of France, he was given the traditional title of .

According to the custom of the French royal family, Louis was baptised privately and without a name by Cardinal Armand de Rohan. On when he was seven years old the public ceremony of the other baptismal rites took place. It was at this point that he was given the name Louis. His godparents were Louis, Duke of Orléans and the Dowager Duchess of Bourbon (widow of ).

Louis' governess was who had previously served as his father's governess. When he was seven years old, the Duke of Châtillon was named his governor, the Count of Muy was named under-governor, and , formerly bishop of Mirepoix, was named preceptor.

From an early age Louis took a great interest in the military arts. He was bitterly disappointed when his father would not permit him to join the 1744 campaign in the . When his father became deathly ill with fever at , Louis disobeyed orders and went to his bedside. This rash action, which could have resulted in the deaths of both Louis and his father, resulted in a permanent change in the relations between father and son. Up to this point Louis XV had doted on his son, but henceforth the relationship was more distant. He was very close to his three oldest sisters.

In 1744 Louis XV negotiated a marriage between his fifteen year old son and the nineteen year old , daughter of King and his Italian wife, . The marriage contract was signed ; the marriage was celebrated by proxy at and in person at Versailles .

Louis and Maria Teresa were well matched and had a real affection for each other. They had one daughter:
*Marie-Thérèse de France ( &ndash; ).

Three days after the birth of their daughter Louis' wife Maria Teresa died on , . Louis was only sixteen years old. He grieved intensely at the loss of his wife, but his responsibility to provide for the succession to the French crown necessitated that he marry again quickly.

On Louis was married by proxy at to Princess , the fifteen year old younger daughter of Frederick Augustus II, of and and his wife, Archduchess . A second marriage ceremony took place in person at Versailles on .

Marie-Josèphe married Louis de France, and they had eight children:

Louis was rather plump. He was well educated: a studious man, cultivated, and a lover of music, he preferred the pleasures of conversation to those of hunting, balls, or spectacles. With a keen sense of morality, he was very much committed to his wife, Marie-Josèphe, as she was to him.

Very devout, he was a fervent supporter of the s, like his mother and sisters, and was led by them to have a devotion to the . He appeared in the eyes of his sisters as the ideal of the Christian prince, in sharp contrast with their father who was a notorious womanizer.

Kept away from government affairs by his father, Louis was at the center of the "", a group of religiously-minded men who hoped to gain power when he succeeded to the throne.

Louis died of consumption at in 1765 at the age of 36, while his father was still alive, thus never becoming king of France. His mother, Queen Marie Leszczyńska, and maternal grandfather, , the Duke of Lorraine, also survived him. His eldest surviving son, Louis-Auguste, Duc de Berry, became the new dauphin, and later ascended the throne as Louis XVI at the death of Louis XV.

Louis was buried in the Cathedral of St Étienne in . His heart was buried at the Basilica of Saint Denis.

* [http://www.axonais.com/saintquentin/musee_lecuyer/dauphin.html De la Tour's pastels at the Musée l'Écuyer, Saint-Quentin] , (in French) the pastel illustrated above described as a study for one of four portraits De la Tour made of the Dauphin (according to a letter of the ), of which the only known survivor, at the is dated 1748. The curators at the Musée l'Écuyer consider the study above to have served perhaps for the first of these portraits, that of 1745.