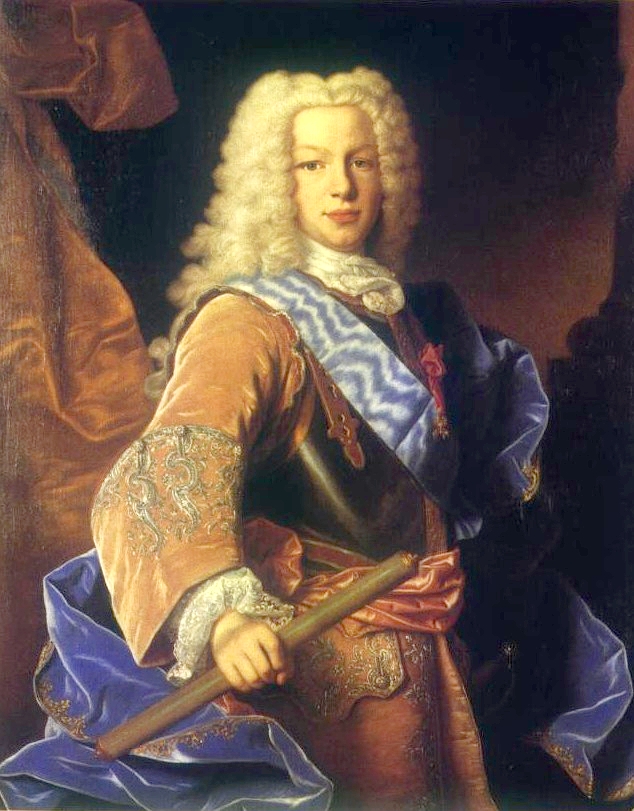 Ferdinand VI, (, &ndash; , ), King of Spain from 1746 until his death, second son of Philip V, founder of the Spanish Bourbon dynasty (as opposed to the French Bourbons), by his first marriage with , was born at on .

His youth was depressed. His father's second wife, , was a domineering woman, who had no affection except for her own children, and who looked upon her stepson as an obstacle to their fortunes. The of his father left Elizabeth mistress of the palace.

Ferdinand was married in 1729 to , daughter of and . The very homely looks of his wife were thought by observers to cause the prince a visible shock when he was first presented to her. Yet he became deeply attached to his wife, and proved in fact nearly as uxorious as his father.

Ferdinand was by temperament melancholy, shy and distrustful of his own abilities. When complimented on his shooting, he replied, "It would be hard if there were not something I could do."

As king he followed a steady policy of neutrality in the conflict between France and England, and refused to be tempted by the offers of either into declaring war on the other. In his life he was orderly and retiring, averse from taking decisions, though not incapable of acting firmly, as when he cut short the dangerous intrigues of his able minister by dismissing and imprisoning him. He was called Ferdinand the Learned for his refined pursuits.

Shooting and music were his only pleasures, and he was the generous patron of the famous singer , whose voice soothed his melancholy.

Beginning of the Reign

When he came to the throne, Spain found itself in the which ended without any benefit to Spain. He started his reign by eliminating the influence of the widow Queen and her group of Italian courtesans. As king he followed a steady policy of neutrality in the conflict between France and England, and refused to be tempted by the offers of either into declaring war on the other.

Prominent figures during his reign were the Marquis of Ensenada, a Francophile; and , a supporter of the alliance with . The fight between both ended in 1754 with the death of Carvajal the fall of Ensenada, making the new powerful man of the monarchy.

The Projects of Ensenada

The most important tasks during the reign of Ferdinand VI were carried out by the Marquis of Ensenada, the Secretary of the Treasury, Navy and Indies. He suggested that the state help modernize the country. To him, this was necessary to maintain a position of exterior strength so that France and Great Britain would consider Spain as an ally without supposing Spain's renunciation of its claim to Gibraltar.

Among his reform projects were:

*New model of the Treasury suggested by Ensenada in 1749. He proposed substitution of the traditional taxes with a special tax, the , that weighed the economic capacity of each contributor based on their property holdings. He also proposed a reduction of subsidies to by the state to the Cortes and the army. The opposition by the nobility caused the abandonment of the project.
*The creation of the Giro Real in 1752, a bank favoring the transfer of public and private funds outside of Spain keeping all of the foreign exchanges in the hands of the Royal Treasury, enriching the State. It is considered the predecessor to the Bank of San Carlos, introduced during the reign of Charles III.
*The stimulation of commerce in the Americas, which tried to end the monopoly in the Indies and eliminate the injustices of colonial commerce. Thus he leaned toward registered ships rather than fleets of ships. The new system consisted of the substitution of the fleets and galleons so that a Spanish ship, previously authorized, could conduct trade freely in the Americas. This increased the revenues and decreased the fraud. Even so, this system provoked many protests among merchants in the private sector.
* The modernization of the Navy. According to Ensenada, a powerful navy was fundamental to a power with an overseas empire and aspirations of being respected by France and Great Britain. He increased the navy's budget and expanded the capacity of the shipyards of , , and which marked the starting point of the Spanish naval power in the eighteenth century.
* Church relations which were really tense from start of the reign of Philip V because of the recognition of Charles VI as the King of Spain by the Pope. A regalist policy was maintained that pursued as much political as fiscal objectives and whose decisive achievement was the Concord of 1753. From this the right of Universal Patronage was obtained from , giving important economic benefits to Crown and a great control over the clergy.
* Cultural advancement. He helped create the Royal Academy of the Fine Arts of San Fernando in 1752. The noted composer , music teacher to Maria Barbara, wrote many of his 555 at Ferdinand's court. Beginning in 1737, the popular singer was a member of the Spanish court, singing for the royal family and organizing court entertainments, concerts and spectacles.

During the and the , Spain reinforced its military might.

The main conflict was its confrontation with Portugal over the colony of Sacramento, from which British contraband was transferred down the Río de la Plata. In 1750 helped Spain and Portugal strike a deal. Portugal agreed to renounce the colony and its claim to free navigation down the Río de la Plata. In return, Spain ceded to Portugal two regions on the Brazilian border, one in the Amazon and the other to the south, in which seven of the thirty Jesuit Guaraní towns. The Spanish had to expel the missionaries, generating a conflict with the Guaraní people that lasted eleven years.

The conflict over the towns provoked a crisis in the Spanish Court. Ensenada, favorable to the Jesuits, and Father Rávago, confessor of the King and members of the , were fired, accused of hindering the agreements with Portugal.

End of the Reign

The death of his wife Maria Barbara, who had been devoted to him, and who carefully abstained from political intrigue, broke his heart. Between the date of her death in August of 1758 and his own on , he fell into a state of prostration in which he would not even dress, but wandered unshaven, unwashed and in a nightgown about his park. The memoirs of the count of Fernan Nuñez give a shocking picture of his deathbed.