Marie Joséphine of Savoy (Maria Giuseppina Luigia; 2 September 1753 – 13 November 1810) was the wife of the future King Louis XVIII of France. She was a princess of Savoy by birth, became titular Queen consort, and was known by her title: Her Royal Highness, Countess of Provence (Comtesse de Provence).

Maria Giuseppina Luigia di Savoia was born at the Royal Palace of Turin on 2 September 1753 and was the third child and second daughter of Prince Victor Amadeus of Savoy and his wife the Spanish Infanta Maria Antonia Ferdinanda of Spain. At the time of her birth her paternal grandfather, Charles Emmanuel III of Sardinia, was the King of Sardinia. As a result her parents were titled the Duke and Duchess of Savoy.

Her brothers included the last three kings of Sardinia from the mainline; the future Charles Emmanuel IV, Victor Emmanuel I and Charles Felix of Sardinia. Her youngest sister, Maria Carolina married the future King of Saxony.

Maria Giuseppina was engaged to the French Prince Louis Stanislas Xavier de France. He was known as the Count of Provence. Her husband was the future Louis XVIII of France.

She was married on 16 April 1771 by proxy in the Kingdom of Sardinia, her homeland. Then again in person on 14 May 1771 at the Palace of Versailles she married the comte de Provence. A luxurious ball followed the wedding on 20 May.[1] The new comtesse de Provence (Louis bore the courtesy title 'comte de Provence') was considered to be ugly, ignorant of the court at Versailles, and tedious. Louis Stanislas was supposedly repulsed by his new wife. We know today that these rumors were created by those who supported Marie Antoinette as a rivalry soon emerged after the youngest brother 'comte d'Artois', married the Comtesse's sister, thereby bringing yet another Savoyard princess to Versailles and creating a Piedmontese party at court.

Some history books claim that the marriage remained unconsummated due to Louis Stanislas' alleged impotence (according to Antonia Fraser), or his unwillingness to sleep with his wife due to her poor personal hygiene. Apparently, she never brushed her teeth, plucked her eyebrows, or used any perfumes.[2]

However, according to the Chateau de Versailles's publication, Versallia (2007 edition), the comtesse's private quarters and bathroom were not ready at the time of the marriage of her arrival. Thus, not only was the comtesse not able to wash herself after spending days in a carriage riding from Turin to Versailles, but she was also not able to do so in the days following her arrival. Initial mockery of the princess in the Versailles court may have stuck. As this fact has only recently come to light, previous accounts of the comtesse and her relations with the comte should be regarded with suspicion as it may very well have been the case that negative remarks were made about the comte and comtesse for various political or circumstantial reasons.[3] 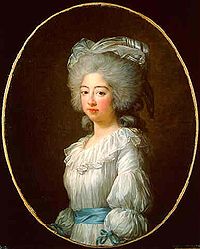 Marie Joséphine by Vigée-Le Brun in 1782.

Despite the fact that Louis Stanislas was supposedly not infatuated with his wife, he boasted that the two enjoyed vigorous conjugal relations — such declarations were held in low esteem by courtiers at Versailles. He also proclaimed his wife to be pregnant, merely to spite Louis Auguste and his wife Maria Antonia of Austria (Marie Antoinette), who had not yet consummated their marriage.[4] Louis Stanislas impregnated his wife in 1774, conquering his alleged aversion to Marie Joséphine. Unfortunately, the pregnancy ended in a miscarriage.[5]

The Dauphin and Louis Stanislas did not enjoy a harmonious relationship, and often quarreled,[6] as did their wives.[7] The comte de Provence actually challenged the legitimacy of Marie Antoinette's first child and until the birth of a male heir by Marie Antoinette, the comte did everything in his power to promote himself and his wife as better fitted to be next in line for the throne.

In France she was known as Marie-Joséphine de Savoie.

At the baptism of her niece Marie Thérèse de France on 19 December 1778, Marie Joséphine stood in for the child's godmother Empress Maria Theresa; her husband stood in for Charles III of Spain.[8]

She was a cousin of the ill-fated Marie Louise of Savoy, princesse de Lamballe who was instrumental in the arrangement of the marriage. She was also a cousin of the Prince of Condé who later helped to organize and lead a large counter-revolutionary army of émigrés. Her aunts included Maria Luisa of Savoy and Eleonora of Savoy, the proposed brides for Louis Stanislas' father. Her uncle the Duke of Chablais fought against French revolutionaries after the execution of Louis XVI in 1793. He took part in the Battle of Loano.[9] 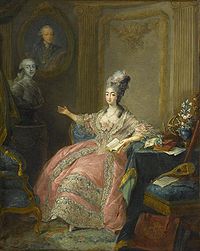 Her marriage was one of three Franco-Savoyard marriages that would occur in four years: hers, the first, was followed by her sister, Princess Maria Teresa who would marry her brother-in-law, the future Charles Philippe de France, comte d'Artois. Charles Philippe was later King of France, Maria Theresa dying in 1805 died before his accession in 1824. The last marriage was between her oldest brother Prince Charles Emmanuel of Savoy (future king) to Clotilde de France; they married in 1775. 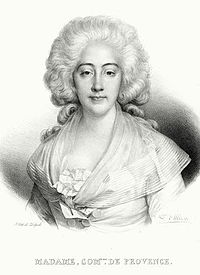 During the revolution, Marie Joséphine and her husband lodged in Luxembourg Palace, while the rest of the royal family stayed in the Tuileries Palace.[11] The Provence couple escaped to the Austrian Netherlands in conjunction with the royal family’s failed Flight to Varennes in June 1791.[12]

In 1791 Marie Joséphine went to Germany. During the period of exile, the Count and Countess fought constantly. Some historians have suggested Marie Joséphine's possible lesbian relationship with a lady-in-waiting as the primary cause for discord between the couple.[13] This lady in waiting was one Madame de Gourbillon.

On 8 June 1795, Louis XVII of France, the only surviving son of Louis XVI of France and Marie Antoinette, died while imprisoned in the Temple, and on 16 June, the exiled French court proclaimed her husband King of France as Louis XVIII. Thus, Marie Joséphine became titular Queen consort of France. Regardless, due to the acrimony, she and her husband spent much time apart.

By 1798, Marie Joséphine was still living in Schleswig-Holstein, Germany, with a friend. She refused to attend the marriage of her niece Marie-Thérèse Charlotte to her nephew Louis Antoine d'Artois, duc d'Angoulême.

Louis Antoine fetched his wife Marie-Thérèse Charlotte and Marie Joséphine, from the continent in 1808.

Marie Joséphine died of an edema at Hartwell House, English residence of the exiled French royal family. Surrounded in her final days by most of the French court, she begged for forgiveness for any wrongs she might have done them, especially Louis, who he assured that he harbored no ill will toward. Her funeral was a magnificent occasion to which the whole Emigration turned out, their names recorded by police spies and reported back to Napoleon. The funeral cortege was followed by the carriage of the British royal family, and Marie Joséphine was laid to rest in the Lady Chapel of Westminster Abbey.[14]

Her body was removed a year later on Louis's orders and buried in the Kingdom of Sardinia; today in Cagliari Cathedral.

There her brother, King Charles Felix of Sardinia, had an imposing monument erected over her grave, whereon she is described personally as "sapiens, prudens, pientissima" ("wise, prudent, kindest") and as "Galliarum Regina", literally "Queen of the Gauls", i.e. of France.[15][16]

Marie Joséphine had a private pavilion built on the Avenue de Paris in the city of Versailles called the Le Pavilon de Musique [de la Comtesse de Provence]. The architect for the project was Jean-François-Thérèse Chalgrin, who also designed the Arc de Triomphe in Paris. Her sister-in-law Élisabeth de France did the same in 1783. The Pavilion was later bought by the Mellerio family. After many a mutation, it was acquired by Alfred Chauchard, who was the founder of the magasin du Louvre. It was then bought by Jacques and Lydie Bazaine in 1960. The couple restored the pavilion which is a classified historical monument.[17] Today it is privately owned by their great grandson. The pavilion was featured on the July 2008 cover of World of Interiors and in the book, "Folie de Batir," by Bernd H. Dams and Andrew Zega. The Comtesse also had another mansion on the grounds which became the lycée privée Sainte-Geneviève in 1913.[18]

She was also the Duchess of Anjou, Vendôme and Alençon by right of her husband being awarded the Peerages in 1771.