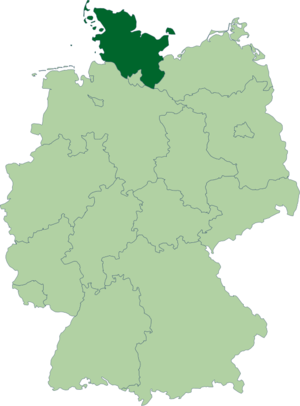 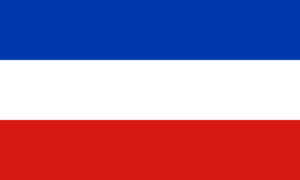 The former English name was "Sleswick-Holsatia," the Danish name is "Slesvig-Holsten," the name is "Sleswig-Holsteen," and the North Frisian name is "Slaswik-Holstiinj."

Historically, the name can also refer to a larger region, containing both present-day Schleswig-Holstein and the former in .

Schleswig-Holstein lies on the base of between the and the .

The former Duchy of ( _da. Slesvig) or ( _da. Sønderjylland) has been divided between and Germany since 1920. , today part of the Danish , earlier , was ceded to Denmark after a following Germany's defeat in .

Schleswig-Holstein borders on Denmark in the north, the in the west, the and in the east, and and in the south. is the capital of the .

In the western part of the state there are lowlands with virtually no hills. The , as well as almost all of Schleswig-Holstein's North Sea coast, form Schleswig-Holstein's Mud Flats National Park (Nationalpark Schleswig-Holsteinisches Wattenmeer) which is the largest national park in Central Europe and is unique. Germany's only high-sea island is situated further out in the North Sea. The Baltic Sea coast in the east of Schleswig-Holstein is marked by bays, and cliff lines. There are rolling hills (the highest elevation is the Bungsberg at 168 metres) and many lakes, especially in the eastern part of Holstein called the "" ("Holsatian Switzerland") and the former Duchy of Lauenburg. is the only island off the eastern coast. The longest river besides the is the Eider; the most important waterway is the which connects the North Sea and Baltic Sea.

Furthermore, there are four urban districts that do not belong to any district:

The official language is German. , Danish, and North Frisian enjoy legal protection or state promotion. Historically, Low German, Danish and Frisian were spoken. Low German is still used in many parts of the state and a pidgin of Low and standardised German is used in most areas, while Danish is used by the Danes in Southern Schleswig, and Frisian by the North Frisians of the North Sea Coast and the Northern Frisian Islands. The North Frisian dialect called ("Halunder") is spoken on the island of . High German was introduced in the 16th century, mainly for official purposes, but is today the predominant language.

Schleswig-Holstein combines Dansk and German aspects of culture. The castles and manors in the countryside are the best example for this tradition. The most important festivals are the , an annual classic music festival all over the state, and the , an annual film festival for movies from n countries, held in . The annual festival is considered to be the largest heavy metal festival in the world. The state's most important museum of cultural history is in castle in . The old city of is a .

The term "Holstein" derives from , "Holseta Land," meaning "the land of those who dwell in the wood" ("Holz" means in modern Standardised German). Originally, it referred to the central of the three Saxon tribes north of the river, , , and . The area of the "Holcetae" was between the river and , and after their main church was in .

The term "Schleswig" takes its name from the city of Schleswig. The name derives from the in the east and "vik" meaning inlet or settlement in and . The name is similar to the place-names ending in the "-wick" element along the coast in the .

The of Schleswig or Southern Jutland was originally an integral part of Denmark, but was in times established as a under the Kingdom of Denmark, with the same relation to the Danish Crown as for example or the . Saxon Holstein became a part of the after 's Saxon campaigns in the late eighth century. Around 1100 the gave Holstein, as it was his own country, to of .

Schleswig and Holstein have at different times belonged in part or completely to either Denmark or Germany, or have been virtually independent of both nations. The exception is that Schleswig had never been part of Germany until the in 1864. For many centuries, the was both a Danish Duke of Schleswig and a German Duke of Holstein, the Duke of Saxony. Essentially, Schleswig was either integrated into Denmark or was a Danish fief, and Holstein was a German fief and once a long ago. Both were for several centuries ruled by the kings of Denmark. In 1721 all of Schleswig was united as a single duchy under the king of Denmark, and the great powers of Europe confirmed in an international that all future kings of Denmark should automatically become dukes of Schleswig, and consequently Schleswig would always follow the same line of succession as the one chosen in the Kingdom of Denmark.

The German national awakening following the led to a strong popular movement in Holstein and Southern Schleswig for unification with a new n-dominated Germany. However, this development was paralleled by an equally strong Danish national awakening in Denmark and northern Schleswig. It called for the complete reintegration of Schleswig into the Kingdom of Denmark and demanded an end to discrimination against in Schleswig. The ensuing conflict is sometimes called the . In 1848 King declared that he would grant Denmark a liberal constitution and the immediate goal for the Danish national movement was to ensure that this constitution would not only give rights to all Danes, i.e., not only in the Kingdom of Denmark, but also to Danes (and Germans) living in Schleswig. Furthermore, they demanded protection for the Danish language in Schleswig since the dominant language in almost a quarter of Schleswig had changed from Danish to German since the beginning of the 19th century.

A liberal for Holstein was not seriously considered in , since it was a well-known fact that the political of Holstein had been far more conservative than Copenhagen's. This proved to be true, as the politicians of Holstein demanded that the be scrapped — not only in Schleswig but also in Denmark. They also demanded that Schleswig immediately follow Holstein and become a member of the , and eventually a part of the new united Germany. These demands were rejected and in 1848 the Germans of Holstein and Southern Schleswig rebelled. This was the beginning of the (1848–51) which ended in a Danish victory at . Elements of this period were fictionalized in "", the second of George MacDonald Fraser's novels.

In 1863 conflict broke out again as King died leaving no . According to the of Denmark and Schleswig, the crowns of both Denmark and Schleswig would now pass to Duke Christian of (the future King ); the crown of Holstein was considered to be more problematic. This decision was challenged by a rival pro-German branch of the Danish royal family, the House of (Danish: Augustenborg) who demanded, as in 1848, the crowns of both Schleswig and Holstein. The passing of a common constitution for Denmark and Schleswig in November 1863 then gave a chance to intervene and Prussia and Austria declared war on Denmark. This was the which ended in a Danish defeat. British attempts to mediate failed, and Denmark lost Schleswig, Holstein, and Lauenburg to Prussia and Austria.

Following the Austro-Prussian War of 1866, section five of the Peace of Prague stated that the people in northern Schleswig should be granted the right to a on whether they would remain under Prussian rule or return to Danish rule. This promise was never fulfilled by Prussia.

Following the defeat of Germany in , the Allied powers arranged a referendum in northern and central Schleswig. In northern Schleswig ( ) 75% voted for with Denmark and 25% voted for Germany. In central Schleswig ( ) the results were reversed; 80% voted for Germany and just 20% for Denmark, primarily in . No vote ever took place in the southern third of Schleswig. On , northern Schleswig officially returned to Danish rule. The Danish/German border was the only one of the borders imposed on Germany by the after World War I which was never challenged by .

After the , the n province Schleswig-Holstein came under British occupation. On , , the Military Government abolished the province and reconstituted it as a separate "Land" [Ordinance No. 46, PDFlink| [http://www.lwl.org/westfaelische-geschichte/que/normal/que1167.pdf "Abolition of the Provinces in the British Zone of the Former State of Prussia and Reconstitution thereof as Separate Länder"] |218 KiB ] .

The shows the symbols of the two duchies united in Schleswig-Holstein, i.e., the two lions for Schleswig and the leaf of a nettle for Holstein. Supposedly, decreed that the two lions were to face the nettle because of the discomfort to their bottoms which would have resulted if the lions faced away from it.

The motto of Schleswig-Holstein is "Up ewich ungedeelt" (: "Forever undivided", modern High German: "Auf ewig ungeteilt"). It goes back to the in 1460. See .

A state election was held on . Although the SPD-Green coalition, led by , no longer commanded a majority of the Landtag, the SSW announced that, although it would not enter an official coalition, it saw more common ground with the SPD than the CDU.Premier Heide Simonis proceeded to form a Red-Green coalition with the assumption of SSW backing.

On , Simonis failed to win a Landtag vote for the premiership, with the secret ballot tying 34–34. It is not known who the abstainer was, but this prevented the formation of a Red-Green coalition. The SPD was forced to negotiate a with the CDU, acceding to the CDU's demand that CDU leader replace Simonis as Minister-president.