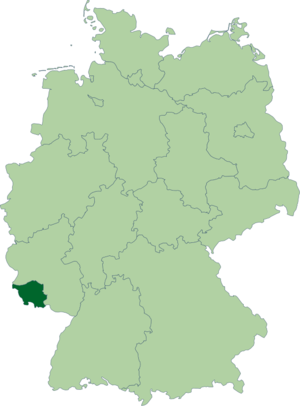 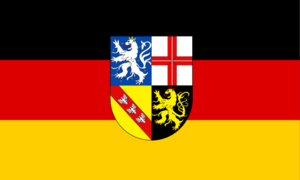 Saarland (pronounced|ˈzaːɐ̯lant in German; French: "Sarre") is one of the 16 federal states (German: "Bundesländer") of . The capital is . It has an area of 2570 km² and 1,045,000 inhabitants. In both area and population it is the smallest of the German "Flächenländer" ("area states"), i.e., those that are not s (, Bremen and ). Its location between French and German powers has given Saarland a unique history. It was the only state to join the "Bundesrepublik" between its formation in 1949 and the in 1990. With 65.1 percent of the population being Catholic, it is one of two states (the other being ) that has a majority Catholic and is the most state in Germany.

The state borders (département of the ) in the south and west, in the west and Rheinland-Pfalz in the north and the east.

It is named after the , which is, in fact a of the (a tributary) and runs through the state from the south to the northwest. One third of the land area of the Saarland is covered by forest, one of highest percentages in Germany. The state is generally hilly, the highest mountain is the Dollberg with a height of 695.4 m (about 2,280 feet).

Most inhabitants live in a city agglomeration on the French border, surrounding the capital of Saarbrücken.

Before World War I

Roman rule ended in the 5th century, when the s conquered the territory. The region of the Saarland was divided into several small territories, some of which were ruled by sovereigns from adjoining regions. Over the years these territories gained a wide range of independence, threatened only by the French kings, who wanted to incorporate all the territories on the western side of the river .

It was not the but the armies of the who terminated the independence of the states in the region of the Saarland. In 1792 they conquered the region and made it part of the . Most of the villages became part of the Département de la Sarre, with some villages in the east becoming part of the Département Donnersberg. After the defeat of in 1815, the region was divided into three parts. Most of it became part of the Prussian Rhine Province. Another part, similar to the Saarpfalz district was allocated to the . The smallest part, the village of Nohfelden, was ruled by the Duke of Oldenburg.

On July 31, 1870, the French Emperor ordered an invasion across the to seize Saarbrücken. The first shots of the 1870/71 were fired on the heights of Spichern, south of . After the war, the was founded and the Saar region became part of it.

In 1920 the Saargebiet was occupied by Britain and under the auspices of the . The occupied area also included portions of the n and the n . In practice the region was administered by France. In 1920 this was formalized by a 15 year mandate.

In 1933, a considerable number of political opponents of fled to the Saar, as it was the only part of Germany that remained under foreign occupation following the first world war. As a result, anti-Nazi groups agitated for the Saarland to remain under French administration. However, with most of the population being ethnically German and with strong local anti-French sentiments deeply entrenched, such views were considered suspect or even treasonous, and therefore found little support. When the original 15-year-term was over, a was held in the territory on ; 90.3% of those voting favored re-joining .

After , the Saarland came under French occupation and administration again, as the Saar Protectorate.

Under the France attempted to gain economic control of German industrial areas with large coal and mineral deposits that were not in Soviet hands-- the and the . Attempts to gain control of or permanently internationalize the Ruhr (see ) area were abandoned in 1951 with the German agreement to pool its coal and steel resources (see ) in return for full political control of the Ruhr. The French attempt to gain economic control over the Saar was more successful at the time, with the final vestiges of French economic influence ending in 1981. Unlike the Soviets in Upper (Germany's largest center of mining and industry), France did not annex the Saar and did not forcibly expel the local German population.

In the speech , held in Stuttgart on September 6, 1946, the United States stated the U.S. motive in detaching the Saar from Germany as "The United States does not feel that it can deny to France, which has been invaded three times by Germany in 70 years, its claim to the Saar territory". (See also for and designs for the Saar area.)

In the years from 1945 to 1951 a policy of industrial disarmament was pursued in Germany by the Allies (see ). As part of this policy limits were placed on allowed production levels, and industries in the Saar were dismantled just as in the Ruhr, although mostly in the period prior to the detachment (see also [http://www.ena.lu/?lang=2&doc=16822 the 1949 letter] from the UK Foreign minister to the French Foreign minister , urging a reconsideration of dismantling policy).

In 1954, France and the (West Germany) developed a detailed plan called the "Saarstatut" to establish an independent Saarland, but a plebiscite rejected it by 67.7%. On , , the declared that Saarland should be allowed to join the Federal Republic of Germany, which it did on , . This was the last significant international border change in Europe until the .

The Saarland's reunification with the Federal Republic of Germany was sometimes referred to as the "kleine Wiedervereinigung" ("small reunification", in contrast with the post-Cold War re-absorption of the ). Even after reunification, the remained as the territory's currency, until West Germany's replaced it on , . The Saar Treaty established that French, not English as in the rest of West Germany, should remain the first foreign language taught in Saarland schools; this provision is still largely followed today, although no longer binding.

The Saar competed in the qualifying section of the 1954 football World Cup, but failed after coming second to West Germany but ahead of Norway. It also competed in the (see ).

In 1954, the Paris mint coined 10, 20, and 50 "franken" pieces. The following year a 100 franken was also minted. After reunification Saarland switched to the West German mark.

Saarland has been governed by the rightist since 1999. In the most recent elections in 2004, the CDU increased its majority in the Saarland from 1 to 3.

Since Saarland joined the Federal Republic of Germany, the CDU has governed the state for 37 out of 51 years, with the leftist ruling for the remaining fourteen years, thereof 14 years (1985-1998) with serving as minister-president.

People in the Saarland speak (in the southeast, very similar to that dialect spoken in the western part of the Palatinate) and (in the northwest, very similar to that dialect spoken along the and the cities of or even in ), dialects of German. Outside of the Saarland, specifically the Rhine-Franconian variant spoken in the Landeshauptstadt is generally considered to be "the" Saarland dialect. In general, both dialects are an integral part of the “Saarlandish” identity and thus a strong source of local patriotism.

Both dialects, even more so in their respective Saarland flavour, share many characteristic features, some of which will be explained below.

Women and girls are often referred to using the neuter , "es", with the pronunciation being something like "Ähs". "Ähs hat mir's gesaat" ("it told me so", instead of "she told me so"; vs. High German: "Sie hat es mir gesagt"). This stems from the word "Mädchen" (girl) being neuter in German ("es" is correct in German when referring to words like "Mädchen" but would not be used by itself in reference to a woman).

is rather different:
*The case does not exist at all and is entirely replaced by constructs with the .
*In most instances, a word is not altered when cast into the dative case. Exceptions are mostly s.
*The same holds for the case. Even more so, it is accepted practice to use the case instead of the accusative.

are almost non-existent. The Saarlandish variant of a High-German word that contains a diphthong usually will have a long in its place. Moreover, the vowels "ö" and "ü" do not exist in the dialect. They are generally replaced by "e" and "i" respectively.

French has had a considerable influence on the vocabulary, although the pronunciation of imported French words usually is quite different from their original. Popular examples comprise "Trottwaa" (from "trottoir"), "Fissääl" (from "ficelle"), and the imperative or greeting "aalleh!" (from "allez!").

The English phrase "My house is green" is pronounced almost the same (in the Rhine Franconian variant): "Mei Haus is grien". The main difference lies in the pronunciation of the "r" sound.

The has a long tradition and special standing in Saarland. This is not least due to the fact that France sought to incorporate the region into the French state shortly after . Today, a large part of the population is able to speak French, and it is compulsory at many schools [ [http://www.saarland.de/27247.htm Kernlehrpläne - Gesamtschule | Saarland.de ] ] . Saarbrücken is also home to the bilingual "Deutsch-Französisches Gymnasium" (German-French high school) [http://de.wikipedia.org/wiki/Deutsch-Franz%C3%B6sisches_Gymnasium] .