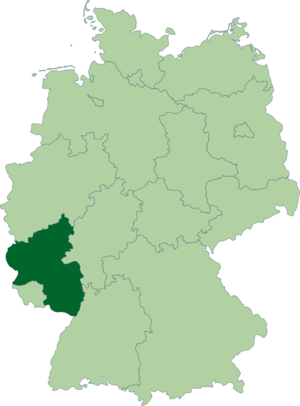 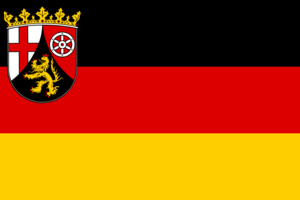 Rhineland-Palatinate ( _de. Rheinland-Pfalz) is one of the 16 federal states (German: "Bundesländer") of . It has an area of convert|19846|km2|sqmi and about four million inhabitants. The capital is .

The federal state of Rhineland-Palatinate was established on 30 August 1946. It was formed from the northern part of the French Occupation Zone, which included parts of (the ), the southern parts of the n (including the District of Birkenfeld which formerly belonged to Oldenburg), parts of the Prussian Province of Nassau (see ), and parts of Hesse-Darmstadt ( on the western banks of the Rhine); the new state was legally confirmed by referendum on 18 May 1947.

Rhineland-Palatinate borders (from the north and clockwise) , , , , , and .

The biggest river of the state is the river, which forms the border with Baden-Württemberg and Hesse in the southeast before running through the northern part of Rhineland-Palatinate.The Rhine Valley is bounded by mountain chains and forms a fascinating landscape containing some of the most historically significant places in Germany.

These mountain chains are separated from each other by the following tributaries of the Rhine: the Moselle ("Mosel"), the and the .

Rhineland-Palatinate is a parliamentary democracy. Every five years, all Germans residing in the State over the age of 18 elect the members of the . This regional or then elects the premier and confirms the cabinet members. Rhineland-Palatinate is the only German Bundesland to have a cabinet minister for growing ("Ministry of Economy, Traffic, Agriculture and Winegrowing")

Kurt Beck (SPD) remained Minister-President, winning an outright majority. Beck offered the FDP to continue the coalition ("red-yellow"). The FDP, however, declined and went into opposition. The lost their representation in the State Parliament.

Rhineland-Palatinate is divided into 24 districts, formerly grouped into the three administrative regions: Koblenz, Trier and .

Since 2000, the employees and assets of the Bezirksregierungen form the "Aufsichts- und Dienstleistungsdirektion Trier" (Supervisory and Service Directorate Trier) and the "Struktur- und Genehmigungsdirektionen" (Structural and Approval Directorates) "Nord" in and "Süd" in . These administrations execute their authority over the whole state, i. e. the "ADD Trier" oversees all schools.

Every district is composed of numerous municipalities, which can consist of cities, villages, or groups of villages known as n.Furthermore there are twelve urban districts which are identified on the map with letters:

Six out of all thirteen wine regions for quality wine in Germany, Rheinhessen, Pfalz, Mosel, Nahe, Mittelrhein and Ahr are located in Rhineland-Palatinate. Due to this fact 65% to 70% of the whole production output of wine grapes in Germany have their origin within this federal state. 13,000 wine producers generate 80% to 90% of the German wine export, which was 2.6&nbps;million&nbps;hectoliters in 2003.

Traditional grape varieties as well as a wide range of varieties developed during the last 125 years are characteristic for the region.Classical white varieties are cultivated at convert|63683|ha|acre. These comprise the famous s convert|14446|ha|acre, (convert|8663|ha|acre), (convert|3701|ha|acre) and Kerner (convert|3399|ha|acre).

The share of red varieties grew constantly during the last decades and amounts to convert|20000|ha|acre. , a new , is the leading red grape cultivated on convert|7626|ha|acre, which is more than a third. (convert|4446|ha|acre) and Spätburgunder (convert|3867|ha|acre) show also appreciable cultivated shares. [ [http://www.statistik.rlp.de/lan/tabellen/rebflaechen.html Cultivated grape varieties in Rhineland-Palatinate 2005] publisher: Statistical Office of Rhineland-Palatinate]

Beside these , , as white varieties and and St. Laurent as red varieties are increasing their share throughout the years, as the growing conditions improve in Rhineland-Palatinate.

The land supports the wine industry by providing a comprehensive consultancy and education program in the service supply centers ("German:" DLR) of the land. The and also the are fully or even partially financed by the land. Many well known new breeds like , , and have been created in these institutes.

Other renowned sparkling wine producers like Kupferberg, Deinhard and Henkell also had their roots in the land, but now belong to companies outside this federal state, due to business consolidation.

Important sectors are the with the largest chemical company in the world, headquartered in Ludwigshafen, the with in and the mechanical engineering for important car manufacturers like (engines in Kaiserslautern) or the biggest European truck manufacturer -Truck-Group in , as well as Stabilus, a manufacturer of s and world market leader in pneumatic springs and Schottel for . Cookie and cracker specialist Griesson - de Beukelaer is one of the leading biscuit manufacturers in Germany. is one of the major brewers in Germany and the is also a leader in its sector, the bottlers. The famous electronic organ manufacturer is headquartered in .

is the only international passenger airport in RP.

Rhineland-Palatinate has supplied immigrants to many parts of the world. The en dialect in Brazil bears testimony to this fact, as do the names of the villages of New Paltz and Palatine Bridge in New York and .The spoken by the Amish people is (among other dialects) derived from the German dialect spoken in the Rhineland-Palatinate.

Certain colonies in the were settled by &mdash;then refugees in &mdash;passage paid for by Queen to reduce the number of impoverished families in . One of the most notable is , one of the earliest colonies settled in 1710 by about 400 Palatines (it was 650, but about half died in passage) and 100 Swiss. This venture was orchestrated by the Swiss-born after purchasing over convert|19000|acre|ha from the British Proprieters of (later called Carolina).