Louis Bonaparte
This article is about the King of Holland. For Louis-Napoléon Bonaparte, see Napoleon III.

Louis Napoléon Bonaparte, Prince Français, Comte de Saint-Leu (2 September 1778 – 25 July 1846), King of Holland (1806–10), was the fifth surviving child and the fourth surviving son of Carlo Buonaparte and Letizia Ramolino. His brother was the first Emperor of the French, Napoleon I, and his son was the last, Napoleon III.

Louis Bonapart's early career was spent in the Army, and he served with Napoleon in Egypt. Thanks to his older brother, Napoleon, Louis was a General by the age of 25, although he himself felt that he had risen too high in too short a time.

Upon Louis's return to France, he was involved in Napoleon's plot to overthrow the Directory. After becoming the First Consul, Napoleon arranged for a marriage between Louis and Hortense de Beauharnais, the daughter of Empress Josephine, and hence Napoleon's stepdaughter. Hortense, who was opposed to the marriage at first, was persuaded by her mother to marry Louis for the sake of the family, and she did so.

As the King of Holland

Napoleon made him the King of Holland on June 5, 1806. Though the older brother, Napoleon, had intended for the younger brother to be little more than a French governor of Holland, Louis took his duties as the King seriously, calling himself Koning Lodewijk I (adopting the Dutch form of his name), attempting to learn the Dutch language, and trying hard to be a responsible, independent ruler of Holland. Allegedly, when he first arrived in Holland[citation needed], he told the people he was the Konijn van 'Olland ("rabbit of 'Olland"), rather than "Koning van Holland" ("King of Holland"), because his Dutch was not very good by then. However, his attempt at speaking the Dutch language earned him some respect from his subjects. 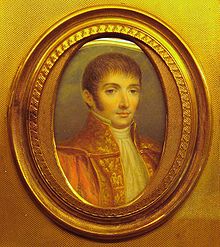 While in Holland, Louis Bonaparte declared that he was Dutch and renounced his French citizenship[citation needed]. Louis also forced his court and ministers (mostly provided by Napoleon) to speak only Dutch, and also to renounce their French citizenships. This latter was too much for his wife Hortense who, in France at the time of his demands, refused his request.

Louis could never settle on the location for his capital city while he was in Holland. He changed capitals over a dozen times, trying Amsterdam, the Hague, Rotterdam, and other places. On one occasion, after visiting the home of a wealthy Dutch merchant, he liked the place so much that he had the owner evicted so he could take up residence there. Then, Louis moved again after seven weeks. His constant moving kept the court in upheaval since they had to follow him everywhere. The European diplomatic corps went so far as to petition Bonaparte to remain in one place so they could keep up with him. This restlessness was later attributed to his alleged "lunacy".

Hortense bore Louis's sons Napoleon Charles Bonaparte and Napoleon Louis Bonaparte in Paris, while Louis was in Holland. In 1806, Louis called for his son to be sent to him in Holland, but he was again refused by Hortense, who believed that her son would never be returned to France. When Louis appealed to his brother Napoleon for help, Napoleon sided with Hortense. Napoleon kept the boy in his own court, and he even had him named the heir to the French throne prior to the birth of his own son.

Two major tragedies occurred during the reign of Louis Bonaparte: the explosion of a cargo ship loaded with gunpowder in the heart of the city of Leiden in 1807, and a major flood in Holland in 1809. In both instances, Louis personally and effectively oversaw local relief efforts, which helped earn him the moniker of Louis the Good.

Louis Bonaparte's reign of the Netherlands was short-lived, however, which was due to two factors. The first was that Napoleon wanted to reduce the value of French loans from Dutch investors by two-thirds, meaning a serious economic blow to the Netherlands. The second factor was the one that became the pretext for Napoleon's demand of Louis's abdication. As Napoleon was preparing an army for his invasion of Russia, he wanted troops from the entire region under his control, the allied border countries. This included troops from the Netherlands. Louis, confronted by his brother's demand, refused point-blank. Napoleon then accused Louis of putting Dutch interests above those of France, and removed most of the French forces in Holland for the coming war in the east, leaving only about 9,000 garrison soldiers in the country. Unfortunately for Louis, the English landed an army of 40,000 in 1809 in an attempt to capture Antwerp and Flushing. With Louis unable to defend his realm, France sent 80,000 militiamen, commanded by future King of Sweden Jean-Baptiste Bernadotte and successfully repelled the invasion. Napoleon then suggested that Louis should abdicate, citing Louis's inability to protect Holland as a reason. Louis refused. Napoleon finally invaded Holland on 1 July 1810, forcing Louis to abdicate the same day, and annexed the entire Kingdom of Holland on 9 July.

Louis Bonaparte also had been made the Count of Saint-Leu[citation needed]. He was appointed as the Constable of France in 1808, a strictly honorary title.

After his Dutch kingdom was taken away from him the Austrian Emperor Francis I offered him asylum. Between 1811 and 1813 he found refuge in Graz, where he turned to writing and poetry. Louis wrote to Napoleon after the latter's defeat in Russia to request that the Dutch throne be restored to him; however, Napoleon refused. His request to visit the Netherlands was denied several times by King William I of the Netherlands; King William II of the Netherlands allowed him a visit in 1840. Although traveling in the Netherlands under a false name, some people found out that it was their former king, which led to a cheering crowd gathering under the window of his hotel room. It is said he was quite moved by this demonstration of affection from his former subjects.

After the deaths of both Napoleon Bonaparte in 1821, and of his eldest brother Joseph in 1844, Louis was seen by the Bonapartists as the rightful Emperor of the French, although Louis took little action himself to advance the claim. (Louis's son and heir, the future Emperor Napoleon III, on the other hand, was at that time being imprisoned in France for having tried to engineer a Bonapartist coup d'état.)

Louis Bonaparte died on July 25, 1846 in Livorno, and his remains were buried at Saint-Leu-la-Forêt, Île-de-France.

This marriage had been forced upon them and was rather loveless, though they supposedly consummated it and interacted often enough to produce three sons. As a rule, the Bonapartes, with the exception of Napoleon, loathed the Beauharnais. Hortense also certainly had extra-marital lovers.[3]

Hortense de Beauharnais gave birth to three sons which were officially claimed by Louis Bonaparte, despite his own doubts about their paternity:

Louis Bonaparte was also supposedly the father of an illegitimate son, François de Castelvecchio, (26 April 1826 – 29 May 1869)[citation needed]. He was born in Rome, Italy and died in Rennes.