William I of the Netherlands

William I of the Netherlands 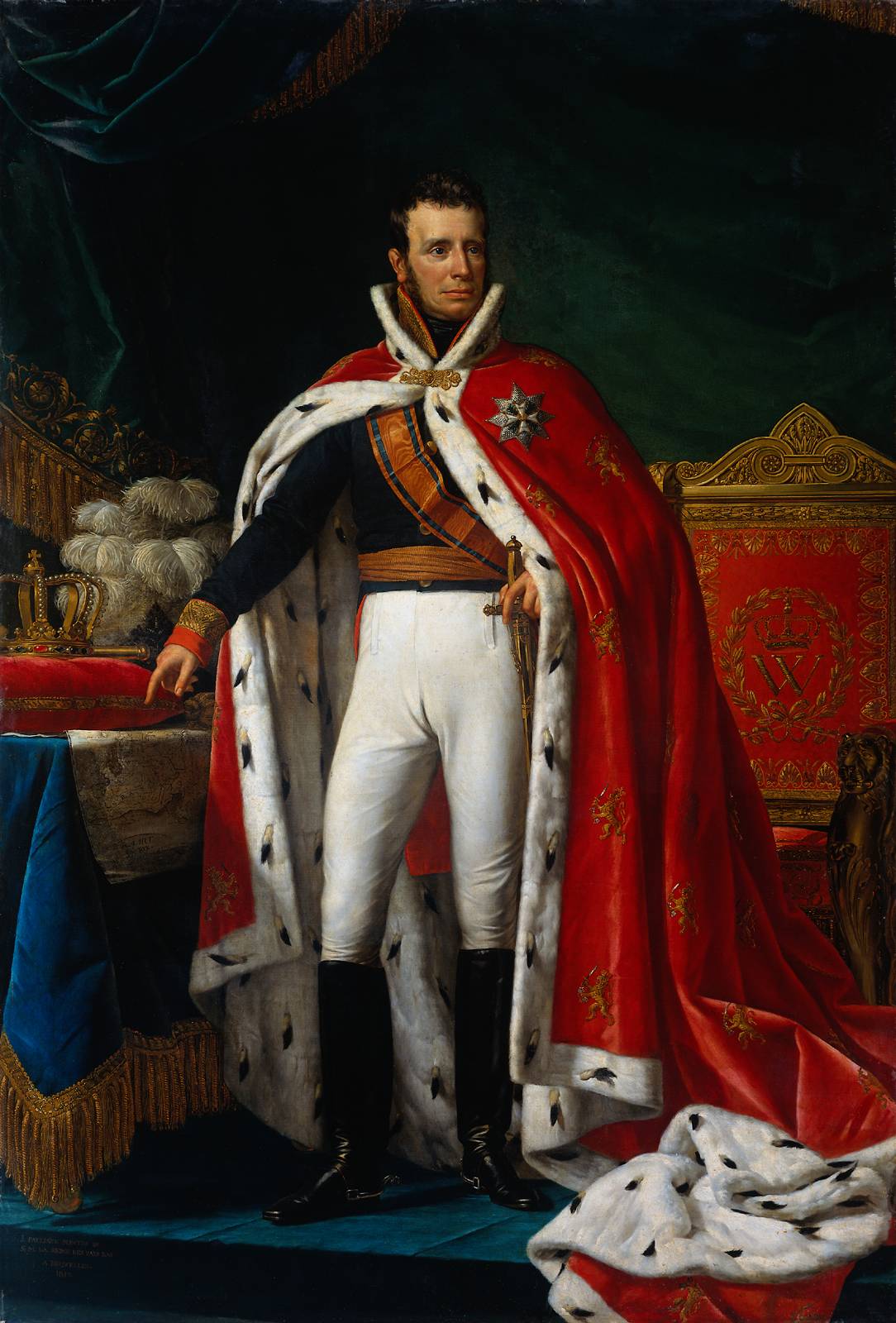 Before succeeding his father in 1806 as head of the he was for a short while ruler of the principality Nassau-Orange-Fulda in Germany from 1803 till 1806. In 1813 he was named 'Sovereign Prince' of , and proclaimed himself King of the Netherlands in 1815. In the same year William I became also the and after 1839 he was furthermore the Duke of Limburg. After his abdication in 1840 he named himself "King William Frederick, Count of Nassau".

King William I's parents were the last and his wife Wilhelmina of Prussia. Until 1813, William was known as William VI, Prince of Orange. In 1791, William married his first cousin (Frederica Louisa) Wilhelmina, born in . She was the daughter of King . After Wilhelmina died in 1837, William was remarried to Countess , in 1841 in Berlin. Two years later, William died there.

William V was hereditary stadtholder when the was invaded by the French Revolutionary armies. He fled with his son to . Unlike his father--who gave his people permission to collaborate with the French--William was a strong personality and he tried to regain the Republic.

In 1799, William landed in the current . The local Dutch population was not pleased with the arrival of the prince. Some local Orangists were even executed. After several minor battles he was forced to leave the country again. Bonaparte gave him some small German principalities as indemnities for the lost territories. These principalities were confiscated when Napoleon invaded (1806) and William supported his Prussian relatives. He succeeded his father as prince of Orange later that year, after William V's death.

After Napoleon's defeat at Leipzig (October, 1813), the French troops retreated to France. A provisional government was formed under the lead of some former "Patriots" who recalled William, in contrast to their 1785 rebellion. In their view, it was taken for granted that William would have to head any new regime, and it would be better in the long term for the Dutch to restore him themselves. The Dutch population was pleased with the departure of the French, who had ruined the Dutch economy, and this time welcomed the prince.

On 30 November 1813 William landed at beach, only a few metres from the place where he had left the country with his father eighteen years previously, and on 6 December the provisional government offered him the title of King. William refused, instead proclaiming himself "sovereign prince." He also wanted the rights of the people to be guaranteed by "a wise constitution".

The constitution offered William extensive (almost absolute) powers. Ministers were only responsible to him, while a two-chambered parliament (the States-General) exercised only limited power. He was inaugurated as sovereign prince in the New Church in . In 1814 he gained sovereignty over the whole of the Low Countries.

Feeling threatened by Napoleon who had escaped from , William proclaimed himself King of the on 16 March 1815 at the urging of the powers gathered at the . His son, the future king William II, fought as a commander at the . After Napoleon had been sent into exile, William adopted a new constitution which included much of the old constitution, such as extensive royal powers.

With his wife the Queen Wilhemina, King William I had six children:

The States-General was divided into two chambers. The "Eerste Kamer" (First Chamber or Senate or House of Lords) was appointed by the King. The "Tweede Kamer" (Second Chamber or House of Representatives or House of Commons) was elected by the Provincial States, which were in turn chosen by . The 110 seats were divided equally between the North and the South (modern-day Belgium), although the population of the North (2 million) was significantly less than that of the South (3.5 million). The States-General's primary function was to approve the King's laws and decrees. The constitution contained many present-day Dutch political institutions; however, their functions and composition have changed greatly over the years.

The constitution was accepted in the North, but not in the South. The under-representation of the South was one of the causes of the Belgian Revolution. Referendum turnout was low, in the Southern provinces, but William interpreted all abstentions to be "yes" votes. He prepared a lavish inauguration for himself in , where he gave the people copper coins (leading to his first nickname, "the Copper King").

The spearhead of King William's policies was economic progress. As he founded many trade institutions, his second nickname was "the King-Merchant". In 1822, he founded the Algemeene Nederlandsche Maatschappij ter Begunstiging van de Volksvlijt, which would become one of the most important institutions of Belgium after its independence. Industry flourished, especially in the South. In 1817, he also founded three universities in the Southern provinces, such as a new University of Leuven, the and the . The Northern provinces, meanwhile, were the centre of trade. This, in combination with the colonies (, and the ) created great wealth for the Kingdom. However, the money flowed into the hands of Dutch directors. Only a few Belgians managed to profit from the economic growth. Feelings of economic inequity were another cause of the Belgian uprising.

Officially, a existed in the kingdom. However, William himself was a strong supporter of the Reformed Church. This led to resentment among the people in the South, who were . William had also devised controversial language and school policies. Dutch was imposed as the official language in (the Dutch-speaking region of) ; this angered French-speaking aristocrats and industrial workers. Schools throughout the Kingdom were required to instruct students in the Reformed faith and the Dutch language. Many in the South feared that the King sought to exterminate Catholicism and the French language.

In August 1830 the opera "", involving the repression of Neapolitans, was staged in Brussels. Performances of this show seemed to crystalise a sense of nationalism and "Hollandophobia" in Brussels, and spread to the rest of the South. Rioting ensued, chiefly aimed at the kingdom's unpopular justice minister, who lived in Brussels. An infuriated William responded by sending troops to repress the riots. However, the riots had spread to other Southern cities. The riots quickly became popular uprisings. Soon an independent state of was proclaimed.

The next year, William sent his sons to Belgium to repress this state. Although initially victorious, the Dutch army was forced to retreat after the threat of French intervention. Some support for the Orange dynasty (chiefly among ) persisted for years but the Dutch never regained control over . William nevertheless continued the war for eight years. His economic successes became overshadowed by a perceived mismanagement of the war effort. High costs of the war came to burden the Dutch economy, fueling public resentment. In 1839, William was forced to end the war. The United Kingdom of the Netherlands was dissolved and renamed the "Kingdom of the Netherlands".

Constitutional changes were initiated in 1840 because the terms which involved the United Kingdom of the Netherlands had to be removed. These constitutional changes also included the introduction of judicial ministerial responsibility. Although the policies remained uncontrolled by parliament, the prerogative was controllable now. The very conservative William could not live with these constitutional changes. This, the disappointment about the loss of and William's intention to marry (scandalously both Belgian and Catholic) created desires about . He fulfilled his desires on 7 October 1840 and his eldest son acceded to the throne as king William II.