listen) French: Rennes, Gallo: Resnn, Breton: Roazhon, Latin: Condate, Civitas Redonum) is a city in the east of Brittany in northwestern France. Rennes is the capital of the region of Brittany, as well as the Ille-et-Vilaine department.

Rennes is the administrative capital of the country of Brittany, in France, the other historical capital being Nantes. It has a long history due to its location at the confluence of two rivers.

The eastern Armorican people of Redones founded Condate —an ancient Celtic word meaning confluent— at the confluence of the Ille and Vilaine rivers and made it the capital of a territory that extended to the Bay of Mont Saint-Michel. The name of the city of Redon also reflects that of the Redones. Early in the 1st century BCE, they adopted the Greek and Roman practice of issuing coinage,[1] adapting the widely imitated gold staters of Philip II of Macedon, in the characteristic Celtic coin metal alloy called billion. Without inscriptions, as the Celtic practice was, the Redones coinage features a charioteer whose pony has a human head. Large hoards of their coins were unearthed in the "treasure of Amanlis" found in June 1835 and that of Saint-Jacques-de-la-Lande, discovered in February 1941. The Museum at Rennes contains a large representative collection.

They joined the Gaulish coalition against Rome in 57 BC, which was suppressed by Crassus. The following year, Roman emissaries were held hostage by the Redones, which obliged Julius Caesar to intervene in Armorica and suppress the rebels, and the following year to cross the Channel to discourage further support of the Redones by the Britons. In 52 the Redones responded to the call of Vercingetorix to furnish a large contingent of warriors[2]

Remains of the Gallo-Roman City wall

The oldest known rennais is Titus Flavius Postuminus, known to us from his steles found in Rennes in 1969. As indicated by his name, he would have been born under the Flavian dynasty, under the reign of Titus, i.e. between 79 and 81 AD. One of the steles tell us, in Latin, that he took charge over all the public affairs in the Civitas Riedonum. He was twice duumvir and flamen for life for Mars Mullo.

During the Roman era, the strategic position of the town contributed to its importance. To the west the principal Roman route, via Osismii stretched from Condate to Vorgium (modern Carhaix).

In the year 275, the threat of barbarians led to the erection of a robust brick wall around Rennes. Rennes became known as the "red town".

Threatened by the danger of peasant marauders called bagaudae at the end of the Roman Empire in the 5th century, the Armorican peninsula, including Brittany and therefore Rennes, constituted the last of the strongholds of the western Roman Empire. The invincible Armorican Romans held their ground against Clovis I, who occupied most of Alamans, then the Visigoths. Melaine, the bishop of Rennes, played an important role in the peace treaty between the Franks and the Armoricans in the year 497. He famously declared "Il faut faire la paix entre chrétiens" ("Peace must be made between Christians"). 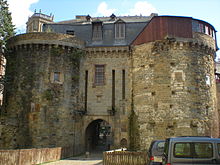 The Mordelles Gates, built in 1440, served as the principal entry to the town during the Middle Ages

Starting in the 5th century, Bretons occupied the western part of the Armorican peninsula, which started to be called Little Britain, and then Brittany, while the Franks took the rest of Armorica. To contain the expansion and avoid Breton incursions, the Carolingians instituted a Breton march or frontier province, composed of the counties of Rennes, Nantes, and Vannes.

These marches were entirely absorbed by the Breton Kingdom in the 9th century, and Rennes became Breton in 851. Rennes would later become the capital of the duchy of Brittany.

During the Breton War of Succession, in 1356 and 1357, the city was laid siege to by Henry of Grosmont, the Duke of Lancaster, cousin of the English king, but Bertrand du Guesclin slipped into the city and took over the resistance, which would ultimately be victorious. After nearly a year, Lancaster abandoned the English siege in 1357.

In 1491, the French army of Charles VIII, led by General Louis II de la Trémoille, unsuccessfully attacked Rennes. Brittany having already capitulated elsewhere, Rennes alone still resisted. The defenders of Rennes were determined to resist to the death, but the Duchess Anne of Brittany chose instead to negotiate. By her marriage to Charles VIII, she made Brittany a part of France. Anne jealously guarded Brittany's autonomy, but the duchy was eventually fully merged with the French crown by her daughter Claude of France.

Entry to the fish market at Les Halles Centrales, south of La Vilaine, from 1922

The banks of the Vilaine.

In 1857 the Rennes train station was built, which gradually led to the southward sprawl of the town. In 1899 Alfred Dreyfus' trial in Rennes caused a national commotion.

During World War II Rennes suffered heavy damage from just three German aircraft which hit an ammunition train parked alongside French and English troop trains and near a refugee train on the yard: 1,000 died. The next day, 18 June 1940, German troops entered the city. Later, Rennes endured heavy bombings by the US and Royal Air Forces in March and May 1943, and again in June 1944, causing hundreds of deaths. Rennes contained a German transit POW camp and a POW hospital which contained many of the paratroopers captured on D-Day. Patton's army freed the capital of Brittany on 4 August, as retreating German troops blew up the bridges behind them, adding further damage. About 50,000 German prisoners were kept in four camps, in a city of only about 100,000 inhabitants at the time.

From 1954 onwards the city developed extensive building plans to accommodate upwards of 220,000 inhabitants,[3] helping it become the third fastest-growing city in France, after Toulouse and Montpellier (1999 census).

Rennes is divided into 11 cantons:

Since the 2008 cantonal elections, all eleven cantons are held by Socialists or their allies. The right held Rennes-Nord-Ouest until 2008. 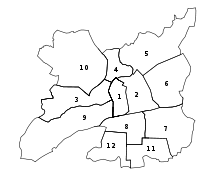 Rennes is divided into 12 quarters: 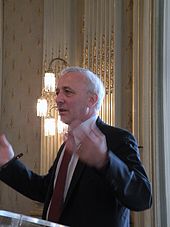 The current mayor of Rennes is Daniel Delaveau, a member of the Socialist Party who replaced retiring Socialist incumbent Edmond Hervé, in office from 1977 to 2008.

Among previous well-know mayors is:

The mairie (City hall) is right in the centre of Rennes.

The ancient centre of the town is built on a hill, with the north side being more elevated than the south side. It is at the confluence of two rivers: the Ille and the Vilaine.

Rennes is classified as a city of art and history. 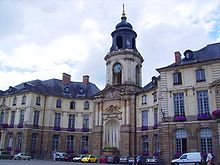 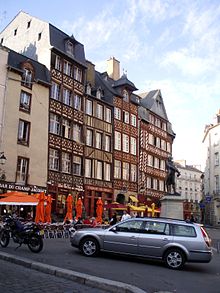 Some medieval and Renaissance houses, such as these at Champ-Jacquet, can still be found in the centre of Rennes. 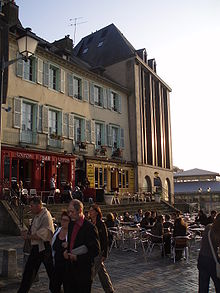 Place des Lices with the roof top of Les Halles Martenot seen in the background.

Saint-Melaine view from the park of Thabor.

The Parlement de Bretagne (Administrative and judicial centre of Brittany, Breton: Breujoù Breizh) is arguably the most famous 17th century building in Rennes. It was rebuilt after a terrible fire in 1994 caused by a flare fired by a protester during a demonstration. It houses the Rennes Court of Appeal.

Basilica Saint-Sauveur is also located in the historic centre.

There are 16th century polychromatic wooden busts in the façade of 20, Rue du Chapitre.

South of the Vilaine

At Place Honoré Commeurec is Les Halles Centrales, a covered market of 1922, with a part converted into contemporary art gallery.

Mercure Hotel is located in a restored building on rue du Pré-Botté, which was the prior location of Ouest-Éclair, and then of Ouest-France, a premier daily regional newspaper.

There are large mills at Rue Duhamel, constructed on each side of the south branch of the Vilaine in 1895 and 1902.

To the North-west of Rennes, near rue de Saint-Malo are the locks of the Canal d'Ille-et-Rance of 1843.

There are two halls of the printer, Oberthür, built by Marthenot between 1870 and 1895 on Rue de Paris in the eastern part of the city. Oberthür Park is the second biggest garden in the city.

The 17th century manor of Haute-Chalais, a granite chateau, is situated to the south of the city in Blosne Quarter (Bréquigny).

Local industries include car manufacturing and telecommunications. PSA Peugeot Citroën, currently the largest employer of the population of Rennes, opened a manufacturing plant at Rennes La Janais in 1961. Technicolor (ex-Thomson) employs over 1,000, and France Telecom R&D over 1,200.

In few years, Rennes became one of the main centres in high tech industry.[citation needed] Rennes is one of first Technopoles in France that were established in an effort to stimulate the economies of regions other than Paris during the Aménagement du territoire. 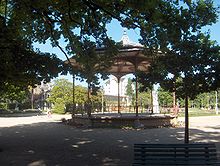 The bandstand in the Thabor Park

Rennes invests heavily in arts and culture and a number of its festivals (such as the music festival Les Transmusicales, les Tombées de la Nuit and Travelling (a cinematic festival)) are well known throughout France. Rennes was one of the first towns in France to have its own television channel 'TV Rennes', created in 1987. In Rennes is the only Institut Franco-Américain in France. There are 4 museums in Rennes:

The campus of Villejean, Université Rennes 2 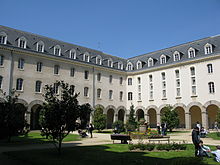 The University of Rennes 1, the faculty of Economics near the Hoche square

Breton bilingual classes in a French school in the city centre

The Rennes agglomeration has a large student population (around 60,000). The Breton language is taught in one Diwan school, some bilingual public and catholic schools, in evening courses, and in university.[7]

The computer science and applied mathematics research institute, IRISA, is located on the campus of the Université des Sciences, nearby Cesson-Sévigné. The Délégation Générale pour l'Armement (defense procurement agency) operates the CELAR research center, dedicated to electronics and computing, in Bruz, a neighboring town.

The municipality launched a linguistic plan through Ya d'ar brezhoneg on 24 January 2008.

In 2008, 2.87% of the children were enrolled in bilingual primary schools and the number of children enrolled in these schools is steadily growing.[8]

Rennes is home to Stade Rennais F.C., who play at Route de Lorient stadium (capacity of 31,000 seats) in the French Division One. 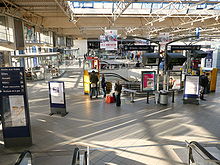 The concourse in Rennes railway station 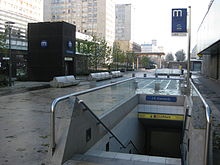 Rennes has well-developed national road, rail and air links. Local transport is based primarily on an extensive bus network (38 different lines) and a metro line that was inaugurated in March 2002 and cost €500 million to build. The driverless Rennes Metro (VAL) is 9.4 km (5.8 mi) in length and has 15 stations, including one designed by architect Norman Foster (La Poterie station).

A second metro line is being planned, it should be operational by 2018, and the construction will begin in 2013.[9]

The Gare de Rennes, opened in 1857, is now two hour and twenty minutes by TGV high speed train from Paris. This will be reduced to one hour and 30 minutes from 2014, after extension of the High Speed Rail Line.[10] Rennes is also an important train station for regional transport in Bretagne.

Rennes is also served by a small airport, Rennes-St. Jacques Airport, located 7.2 kilometres (4.5 mi) from the centre to the south-west in the commune Saint-Jacques-de-la-Lande. 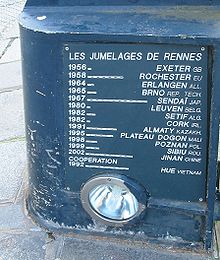 Twinned towns inscribed on the bridge over the central canal.

Rennes is twinned with: