Cantal
This article is about a department of France. For the cheese, see Cantal (cheese). 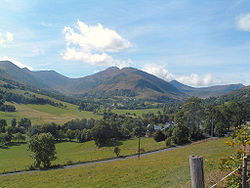 Cantal (French pronunciation: [kɑ̃.tal]; Occitan: Cantal, Cantau, Chantal, Chantau) is a department in south-central France. It is named after the Cantal mountain range, a group of extinct, eroded volcanic peaks, which covers much of the department. Residents are known as Cantaliens or Cantalous.

Cantal is part of the current region of Auvergne. It borders the departments of Puy-de-Dôme, Haute-Loire, Aveyron, Lot, Lozère, and Corrèze. Its principal towns are Aurillac, Saint-Flour, and Mauriac. The highest point in Cantal is Le Plomb du Cantal at 1858 metres.

Cantal remains, with Lozère and Creuse, one of the most sparsely populated and geographically isolated French departments. Aurillac is the farthest removed departmental capital from a major motorway.

Cantal is one of the original 83 departments created during the French Revolution on 4 March 1790. It was created from a part of the former province of Auvergne, called Haute-Auvergne.
The Occitan language was historically dominant in Cantal.

The department of the Cantal has different types of climates according to the geographical position.

The west is well watered, thanks to abundant precipitations coming from the Atlantic. The temperatures are smooth generally, whereas the East is much drier and cooler.

As a matter of fact, there is abundant precipitation on the central area. To this fact, it is necessary to add the effect of the altitude: the climate is quite cold in winter (it snows almost every winter) but it can be very hot during the summer (especially in the southern part of the department with borders with Aveyron and Lot) .

In the central part of the department, that it is to say the highest ground, the altitude surpasses 1,000m easily: It can be very cold, The snow falls in abundance and can remains up to six months on the tops. The temperatures can fall, in the heart of the winter, to below −15 °C (5 °F), whereas at the height of summer 25 °C (77 °F) is often reached.

The weather forecast of the television networks often indicates Aurillac as the coldest city of France in the morning. The temperatures observed by Météo France are explained by the following:

These low morning temperatures could indicate an inhospitable place with a grey and low sky. The reality is totally different: fog is rare and, even then, disappears quickly. There is generous sun all year long and the wind is not usually strong. Cantal is well South (same latitude as Bordeaux) and the annual sunshine hours show it: compare the annual number of hours of sunshine (average from 1991 to 2000):

The Cantal is a mountainous department whose altitude varies between 250 m in the valley of the Lot River and 1855 m in the top of Plomb du Cantal. The temperature variations can be very high from one place to another. It is not colder in the Cantal than in other mountainous regions like the Vosges or Jura. The prevailing winds and the relief divide the Cantal into four climatic zones:

Communes of Cantal are regularly submitted to violent summer storms. According to specialists, the lightning flashes in this department are among the most spectacular in France. 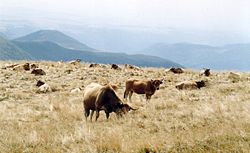 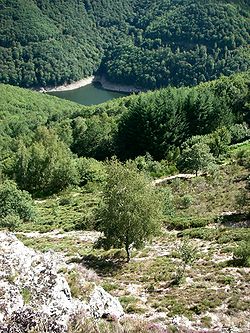 In Cantal, the farmers practice mountain pasture, with the herd passing summer at altitude in the mountains. The milk is traditionally used to produce Appellation d'Origine Contrôlée (AOC) cheese such as Cantal, Salers cheese and Bleu d'Auvergne. Cantal is the only French Departement to be home to no less than 5 Appellation d'Origine Contrôlée cheese [1]

The population peaked at 262,117 in 1836. It has been below 200,000 for the last 90 years. The department has experienced a particularly drastic level of depopulation, although the phenomenon was a feature of many of the country's rural departments throughout the twentieth century, as agricultural wages failed to keep pace with those available in the industrialising regions outside the department. 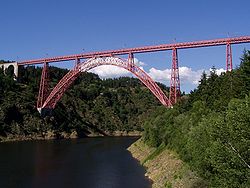 The department counts several remarkable buildings. Among them, the Romanesque religious buildings like the churches of Cheylade (eleventh century), Dieno or Massiac. Some churches are in the Gothic style like the Cathedral of St Pierre de Saint-Flour (fifteenth century).

The characteristic folk dance in Cantal is La Bourée. In the countryside it would be danced with accompaniment by accordion in folk costumes. The dance form was long ago adapted for use in courtly music and features prominently in the Baroque dance suite of the seventeenth and eighteenth centuries.

Prominent museums in Cantal include:

Dishes of Cantal are made of basic recipes. In origin, they were designed to satisfiy hill farmers. They had very physical work: Looking after cows, the manufacture of cheese, etc.

Thus, ham, cheese, vegetables are at the basis of the dishes in this department, such as:

Located in the Parc Regional des Volcans d’Auvergne, the Cantal is a department of little urbanization. The main industry is tourism, especially rural tourism.

The most visited places are Puy Mary (1787 m) considered[by whom?] to be one of the prettiest panoramas in Europe, the Plomb du Cantal (1855 m), the village of Salers, the Gorges of the Truyère (with the Garabit viaduct, the castle of Alleuze), the town of Boisset, Pierrefort...). The Parc naturel des Volcans d’Auvergne features several inactive volcanoes. Cantal also has numerous castles. Puy Mary can be accessed by car easily. And for those who prefer to hike up, it is a very doable hike that doesn't require any special hiking skills. It is also possible to hike to the near-by Puy de Peyre-Arse(1806m). Le Lioran or Super Lioran are the best places to start the hike. Le Lioran is accessible by rail or bus and Super-Lioran is just a km away from Le Lioran. From Super-Lioran it is also possible to hike to Plomb du Cantal. There is also an option of taking the cable car to Plomb du Cantal from Super-Lioran. Super-Lioran tourist office has various hike routes in the region. There are also various adventure courses, dirt bikes, summer luges etc. that run in Super-Lioran (see Le Lioran Tourism).

Among the various activities offered in this department, the "Massif Cantalien" can be discovered through walking, horseback riding or mountain biking excursions (tracks are especially designed for this). Aquatic sports are also popular, thanks to numerous lakes.

The department also proposes more classical activities like mountaineering, canoeing or fishing. The landscape also allows the practice of free flight : Base jump fans frequent the sector around the Puy Mary or the Valley of Brezon.

Thanks to its landscape, Cantal can count on a good snow level, which allows winter sports. The station of Le Lioran (greatest[clarification needed] ski-resort of the Massif Central) allows alpine skiing (with specific adaptations for snowboard) or ice-skating. Excursions in snow shoes are also possible. The department has several hundred kilometers of cross-country skiing tracks.

The very clerical and Catholic Cantal is an old stronghold of the right, and was the electoral base of late President Georges Pompidou. Only the area around Aurillac, historically anti-clerical and Radical, has some left-wing support.

The President of the General Council is Vincent Descoeur of the Union for a Popular Movement.