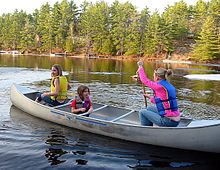 A family in a canoe 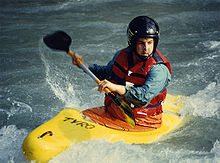 Canoeing is an outdoor activity that involves a special kind of canoe.

Open canoes may be 'poled' (punted), sailed, 'lined and tracked' (using ropes) or even 'gunnel-bobbed'.

Some canoes are called kayaks. When exactly a canoe can be called a kayak is difficult to determine though, and often arbitrary. Internationally, the term canoeing is used as a generic term for both forms though the terms "paddle sports" or "canoe/kayak" are also used. In North America, however, 'canoeing' usually refers only to canoes, as opposed to both canoes and kayaks. Paddling a kayak is also referred to as kayaking. In modern canoe sport, canoes and kayaks are classified together, although these watercraft have different designs, and historical uses. Both canoes and kayaks may be closed-decked. Other than by the minimum competition specifications (typically length and width (beam) and seating arrangement it is difficult to differentiate most competition canoes from the equivalent competition kayaks. The most common difference is that competition kayaks are always seated and paddled with a double-bladed paddle, and competition canoes are generally kneeled and paddled with a single-bladed paddle. Exceptions include Canoe Marathon (in both European and American competitive forms) and sprint (high kneeling position). The most traditional and early canoes did not have seats, the paddlers merely knelt on the bottom of the boat. Recreational canoes and kayaks employ seats and whitewater rodeo and surf variants increasingly employ the use of 'saddles' to give greater boat control under extreme conditions.

The actual word we know today as "canoe" originated from the word Keenu meaning "dugout". Another story is that the word canoe comes from the word "canoa", which is said to originally come from the native people (the Arawaks?) in the Caribbean via Columbus to Europe. (But there are also comments that "canoa" was already an existing word then in the Portuguese language for a feeding trough...). These dugout canoes, essentially large tree trunks that were shaped and hollowed, were used by the Caribs to travel between islands.

Canoeing began to meet the simple needs of transportation across and along waterways. Canoeing was the primary mode of long-distance transportation at one time throughout much of North America, the Amazon Basin, and Polynesia, among other locations. As a method of transportation, canoes have generally been replaced by motorized boats, airplanes, railroads and roads with increasing industrialisation, although they remain popular as recreational or sporting watercraft.

The origin of canoeing as a recreation and sport is often attributed to Scottish explorer John MacGregor (1825–1892), who was introduced to canoes on a camping trip in Canada and the USA in 1858. On his return to the United Kingdom, he constructed his own canoes and used them on waterways in various parts of Britain, Europe and the Middle East. He wrote a popular book about his experiences; "A Thousand Miles in the Rob Roy Canoe" and founded the Royal Canoe Club in 1866. The first canoeing competition, the Paddling Challenge Cup, was held by the club in 1874. In 1924, canoeing associations from Austria, Germany, Denmark and Sweden founded the Internationalen Representation for Kanusport (IRK), forerunner of the International Canoe Federation. Canoeing became an Olympic sport in Berlin in 1936.[1]

The International Canoe Federation is the world wide canoeing organisation and creates the standard rules for the different disciplines of canoe/kayak competition. The ICF recognises several competitive and non-competitive disciplines of canoeing, of which Sprint and Slalom are the only two competing in the Olympic games. The United States Canoe Association is widely considered the American authority in sport and recreational canoeing, and recognizes many ICF classes. Other national competition rules are usually based on the rules of the ICF. 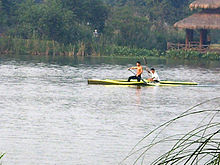 Canoeing as an Olympic Sport

Canoe and kayak events have been part of Olympic competition since 1936, still continuing today.[2]

Competitors must maneuver their boat through 20 to 25 gates in turbulent water over a 300-metre course in the shortest possible time with points deducted for gates touched or missed.[3] 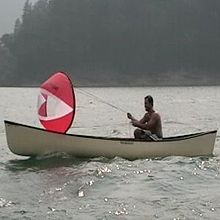 Other recreational aspects of canoeing are not strictly defined, and distinctions are rather artificial and growing increasingly blurred as new hybrid canoes, kayaks, and similar craft are developed. Some of these forms may be nominally organised at national levels, but are largely individual, group, or club activities. For many groups there is no emphasis on training, the goal is simply to use boats to have fun on the water. 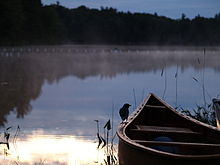 In some countries, these forms of paddling may come under the national canoeing organisations, but they are not universally accepted as canoeing, even though they involve propelling a small craft with a paddle.