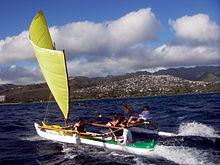 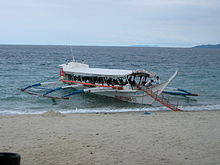 The outrigger canoe (Filipino and Indonesian: bangka; New Zealand Māori: waka ama; Cook Islands Maori: vaka; Hawaiian: waʻa; Tahitian and Samoan:vaʻa) is a type of canoe featuring one or more lateral support floats known as outriggers, which are fastened to one or both sides of the main hull. Smaller canoes often employ a single outrigger on the port side, while larger canoes may employ a single-outrigger, double-outrigger, or double-hull configuration (see also catamaran). The sailing canoes are an important part of the Polynesian heritage and are raced and sailed in Hawaii, Tahiti, Samoa and by the Māori of New Zealand.

Using an outrigger or double-hull configuration greatly increases the stability of the canoe, but introduces hydrodynamic inefficiency relative to making a single-hull canoe wider. Compared to other types of canoes, outrigger canoes can be quite fast, yet are also capable of being paddled and sailed in rougher water. This paddling technique, however, differs greatly from kayaking or rowing. The paddle, or blade, used by the paddler is single sided, with either a straight or a double-bend shaft. Despite the single paddle, an experienced paddler will only paddle on one side, using a technique such as a J-stroke to maintain heading and stability.

The traditional pōpao of Tonga.

Hawaiʻiloa, a double-hull sailing canoe built as a replica of Polynesian voyaging canoes.

Outrigger fishing canoes are also used among certain non-Austronesian groups, like the Sinhala in Sri Lanka, where they are known as oruwa,[1] as well as among some people groups in the Andaman and Nicobar Islands.[2] The ethnological significance of this spread has been studied by James Hornell.

When Magellan's ships first encountered the Chamorros of the Mariana Islands in 1521, Antonio Pigafetta recorded that the Chamorros' sailboats far surpassed Magellan's in speed and maneuverability.

The Polynesian Voyaging Society has two double-hull sailing canoes, Hōkūleʻa and Hawaiʻiloa, and sails them between various islands in the Pacific using traditional Polynesian navigation methods without instruments.

The technology has persisted into the modern age. Outrigger canoes can be quite large fishing or transport vessels, and in the Philippines, outrigger canoes (called bangka, parao or balanghai) are often fitted with petrol engines. The links between seafaring and outrigger canoes in the Philippines extend through to political life, in which the smallest political unit in the country still called Barangay after the historical Balangai outrigger proas used in the original migrations of the first Austronesian peoples across the archipelago and beyond.

Outrigger canoe racing has become a popular canoeing sport, with numerous clubs located around the world. Outrigger Canoe Racing is the State sport of Hawaii and an interscholastic high school sport. In Hawaii entire families participate in summer regattas with age groups from manini (children as young as 6 with an adult steersperson) and age 12 through age 60+.

Major races in Hawai'i include the Molokaʻi Hoe (43 mi/69 km men's race from the island of Molokaʻi to Oʻahu across the Kaiwi Channel), Na Wahine O Ke Kai (same race for women) and the Queen Liliʻuokalani Race held near Kona on the Island of Hawaiʻi.

Modern OC6 hulls and amas are commonly made from glass-reinforced plastic. However, some canoes are made of more traditional materials. In Ancient Hawaiʻi, canoes were carved from the trunks of very old koa trees. These canoes, although rare, are still very much in use today. The ʻiako are usually made of wood; the ʻiako-ama and ʻiako-hull connections are typically done with rope wrapped and tied in interlocking fashion to reduce the risk of the connection coming completely apart if the rope breaks.

Modern OC1 hulls and amas are commonly made from glass-reinforced plastic, carbon fiber reinforced plastic, and/or Kevlar to produce a strong but light canoe. OC1 are often made with rudders operated by foot pedals. More traditional designs do not have rudders. OC1 commonly use ʻiako made of aluminium, with a mechanism for quickly assembling and disassembling the canoe (snap buttons, large wing nuts, etc.). 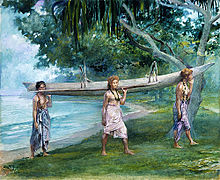