A cog (or cog-built vessels) is a type of ship that first appeared in the 10th century, and was widely used from around the 12th century on. Cogs were generally built of oak, which was an abundant timber in the Baltic region of Prussia. This vessel was fitted with a single mast and a square-rigged single sail. These vessels were mostly associated with seagoing trade in medieval Europe, especially the Hanseatic League, particularly in the Baltic Sea region. 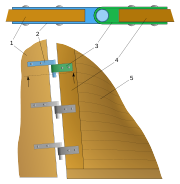 Cogs were characterized by a flush-laid flat bottom at midships but gradually shifted to overlapped strakes near the posts. They had full lapstrake planking covering the sides, generally starting from the bilge strakes, and double-clenched iron nails for plank fastenings. The keel, or keelplank, was only slightly thicker than the adjacent garboards and had no rabbet. Both stem and stern posts were straight and rather long, and connected to the keelplank through intermediate pieces called hooks. The lower plank hoods terminated in rabbets in the hooks and posts, but upper hoods were nailed to the exterior faces of the posts. Caulking was generally tarred moss that was inserted into curved grooves, covered with wooden laths, and secured by metal staples called sintels. Finally, the cog-built structure could not be completed without a stern-mounted hanging central rudder, which was a unique northern development.[1] Cogs used to have open hulls and could be rowed short distances. In the 13th century they received decks. The most famous is the Bremen cog.

Cogs are first mentioned in 948 AD, in Muiden near Amsterdam. These early cogs were influenced by the Norse Knarr, which was the main trade vessel in northern Europe at the time, and probably used a steering oar, as there is nothing to suggest a stern rudder in northern Europe until about 1240.[2]

Current archaeological evidence points to the Frisian coast, Western Jutland, as the possible birthplace of this type of vessel. The transformation of the cog into a true seagoing trader came not only during the time of the intense trade between West and East, but also as a direct answer to the closure of the western entrance to the Limfjord. For centuries, Limfjord in northern Jutland offered fairly protected passage between the North Sea and the Baltic. Due to unusual geographical conditions and strong currents, the passage was constantly filling with sand and was completely blocked by the 12th century. This change produced new challenges. Bigger ships that could not be pulled across the sand bars had to sail around the Jutland peninsula and circumnavigate the dangerous Cape Skagen to get to the Baltic. This resulted in major modifications to old ship structures, which can be observed by analyzing evolution of the earliest cog finds of Kollerup, Skagen, and Kolding.

The need for spacious and relatively inexpensive ships led to the development of the first workhorse of the Hanseatic League, the cog. The new and improved cog was no longer a simple Frisian coaster but a sturdy seagoing trader, which could cross even the most dangerous passages. Fore and stern castles would be added for defense against pirates, or to enable use of these vessels as warships, such as used at the Battle of Sluys.

Eventually, around the 14th century, the cog reached its structural limits, resulting in the desperate need for a quick replacement. The replacement, the hulk, already existed but awaited reconditioning. Although there is no evidence that hulks descended from the cogs, it is clear that a lot of technological ideas were adapted from one to the other and vice versa.[3] The transition from cogs to hulks was not linear. According to some interpretations, both vessels coexisted for many centuries but followed diverse lines of evolution.[4]