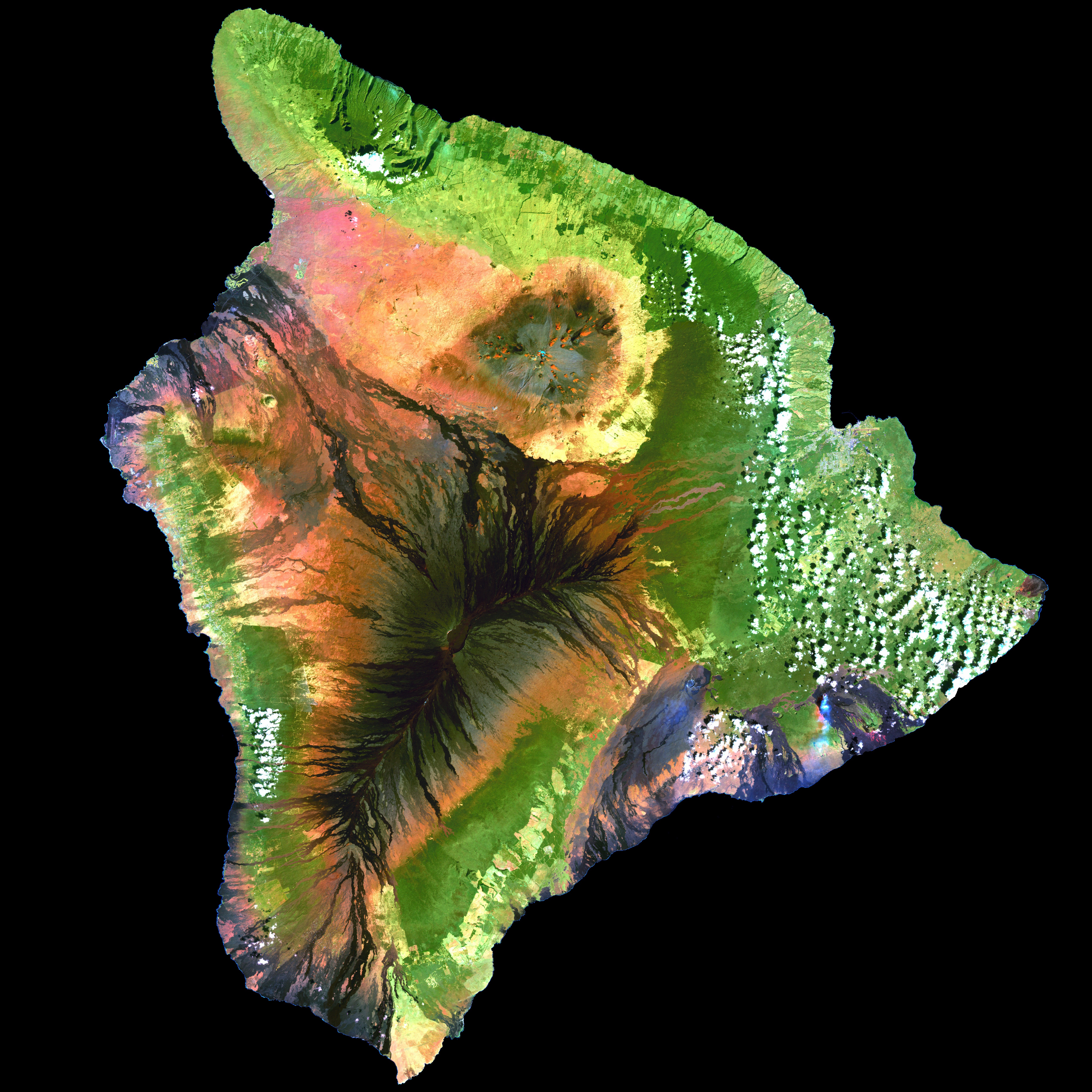 Hawaiokinai is said to have been named for Hawaiokinailoa, the legendary Polynesian navigator who first discovered it. However, other accounts attribute the name to the legendary land or realm of "", a place from which the Polynesians originated (see also ), the place where they go in the afterlife, the realm of the gods.

The Island of Hawaiokinai is administered as the County of Hawaiokinai. The county seat is . It is estimated that as of the year 2003, the island had a resident population of 158,400.

Hawaiokinai was the home island of , who by 1795 had united most of the Hawaiian Islands under his rule after several years of warfare and conquest. He gave his kingdom the name of his native island, which all the islands are now known as, Hawaiokinai. Captain , who made the Western world aware of these "Sandwich isles", was killed on Hawaiokinai in .

The Island of Hawaiokinai is built from five separate shield volcanoes that erupted somewhat sequentially, one overlapping the other. These are (from oldest to youngest):
*Kohala (extinct),
* (dormant),
*Hualālai (dormant),
* (active, partly within Hawaiokinai Volcanoes National Park), and
*Kīlauea (very active; part of Hawaiokinai Volcanoes National Park). Interpretation of geological evidence from exposures of old surfaces on the south and west flanks of Mauna Loa led to the proposal that two ancient volcanic shields (named Ninole and Kulani) were all but buried by the younger Mauna Loa. [MacDonald and Abbott, 1970] Geologists now consider these "outcrops" to be part of the earlier building of Mauna Loa.

Because Mauna Loa and Kīlauea are active volcanoes, the island of Hawaiokinai is still growing. Between January 1983 and September 2002, convert|543|acre|ha of land were added to the island by flows from Kīlauea volcano extending the coastline seaward. Several towns have been destroyed by Kīlauea lava flows in modern times: Kapoho (1960), Kalapana (1990), and Kaimū (1990). A large fresh water pool, in a deep L-shaped crack in the Kalapana area, well known on the Big Island as "Queen's Bath", was flowed over by lava in 1987.

Hawaiokinai is the southernmost island in the Hawaiian archipelago, and contains the southernmost point in the United States, (). The nearest landfall to the south would be in the . To the north is the island of , where East Maui Volcano (Haleakalā) is visible across the Alenuihāhā Channel.

18 miles (29 kilometers) off Hawaiokinai Island's southeast coast is the undersea volcano known as Lōokinaihi. Lōokinaihi is an actively erupting seamount that lies 3,200 feet (975 m) below the surface of the ocean. It is thought that continued volcanic activity from Lōokinaihi will cause the volcano to eventually breach sea level and later attach at the surface onto Kīlauea, adding even more land to Hawaiokinai's surface area. This "event" is presently predicted for a date several tens of thousands of years in the future.

or the Great Crack is an convert|8|mi|km|0|sing=on long, convert|60|ft|m|0 wide and convert|60|ft|m|0 deep crack in the island, situated in the district of Kaokinaū. The Great Crack is one of many series of cracks and rifts that were formed by eruptions and, in fact, is an extension of the southwest rift zone. Often these rifts are the sites of volcanic eruptions and occasionally a can be so deep and so fractured that it can cause a chunk of the island to fall into the ocean.

Some believe that the Great Crack is a result of the south flank of the Big Island moving away from the rest of the island. Speculation abounds that some day, perhaps soon, a major chunk of the island will break away and fall into the ocean, resulting in turn in a huge and . This actually does happen every ten thousand years or so, so it is not outside the realm of possibility. Others believe the Great Crack is not a fault that will break the island apart, but instead was created (probably thousands of years ago) as a result of the crust moving apart slightly due to forcing itself into the zones. The Great Crack has been measured and is tracked and there is no indication that it is enlarging in any way or that the island is shifting near this point. Furthermore, the walls of the crack have been shown to fit together perfectly, thus proving that the crack was a widening of once joined ground.

One can find trails, rock walls, and archaeological sites from as old as the 12th century around the Great Crack. Much of these finds are on the park side of the fence. About convert|1951|acre|ha|0 of private land beyond the fence were purchased during the Bill Clinton administration specifically to protect the various artifacts in this area as well as to protect the habitat of the turtles. However, near the end of the crack is an area of land between the fence, the crack and the ocean which is not part of the park land and does have many archaeological artifacts on it.

In 1823 a very fluid flow of came out of a convert|6|mi|km|0|sing=on portion of the crack and made its way to the ocean.

On , , an earthquake in this area with a magnitude estimated between 7.25 and 7.75 on the Richter scale rocked the southeast coast of Hawaiokinai. It triggered a landslide on the slopes of Mauna Loa, five miles (8 km) north of Pahala, killing 31 people. A tsunami claimed 46 additional lives. The villages of Punaluokinau, Nīnole, Kawaokinaa, Honuokinaapo, and Keauhou Landing were severely damaged. According to one account, the tsunami "rolled in over the tops of the coconut trees, probably convert|60|ft|m|0 high ... inland a distance of a quarter of a mile in some places, taking out to sea when it returned, houses, men, women, and almost everything movable." This was reported in the 1988 edition of Walter C. Dudley's book, "Tsunami!" (ISBN 0-8248-1125-9).

On , , a convert|37|mi|km|0|sing=on wide section of the Hilina Slump plunged 11 feet (3 m) into the ocean, widening the crack by convert|26|ft|m|0. This movement caused a 7.2 magnitude earthquake and a convert|48|ft|m|-1 high tsunami. Oceanfront properties were washed off their foundations in Punaluokinau. Two deaths were reported at Halapē, and 19 other persons were injured.

The northeast coast of the Big Island has also suffered tsunami damage from earthquakes that triggered waves from Chile and Alaska. Downtown was severely damaged in 1946 and 1960, with many lives lost. Laupāhoehoe alone lost 16 school children and 5 teachers in the 1946 tsunami.

was the backbone of Hawaiokinai Island's economy for more than a century. In the mid-twentieth century, sugar plantations began to downsize and by 1996, the last sugar cane plantation had closed down.

Today, most of Hawaiokinai Island's economy is based on (see ), centered primarily on the leeward ("kona") or western coast of the island in the North Kona and South Kohala districts. However, diversified is a growing sector of the economy of the island. , , , and , and () are all important crops. In fact, because of Hawaiokinai Island's reputation for growing beautiful , the island has the nickname "The Orchid Isle." ranching is also important. The Big Island is home to one of the largest cattle ranches in the United States, , which is situated on convert|175000|acre|km2|0 in and around . Astronomy is another industry, with numerous telescopes situated on owing to the excellent clarity of the atmosphere at its summit and the lack of light pollution.

The Big Island is famous for its es. Kīlauea, the most active, has been erupting almost continuously for more than two decades.At the coast where the meets the ocean, one can sometimes see billows of white steam rising from off the shoreline. At night, the lava lights up the steam to give an orange glow.When the molten lava makes contact with the ocean, the sea water turns into steam, and the sudden cooling of the lava causes the newly formed lava rocks to explode and crack into small pieces.The broken up lava is further ground into black sands along the shore by the ocean waves. beaches are common on the Big Island.

There are plans for a connection with the Superferry starting 2009 between Honolulu and Kawaihae Harbor.Fact|date=September 2008